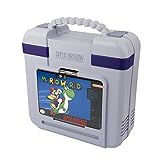 I was seven-years old when Super Mario Bros. came out for Nintendo and I've been hooked ever since. I quickly went through Super Mario Bros. 2 and 3 and Dr. Mario, with a little bit of Donkey Kong thrown in for good measure. Of course, over the years Nintendo gave way to Super Nintendo, Gamecube and my game playing evolved on to Sony's Playstation and cultivated a love affair with "Dance Dance Revolution". But I never forgot my roots, and recently I found myself keeping an eye out for old-school Nintendo systems when I visited flea markets and thrift stores, craving the 8-bit and 16-bit games that had comprised a good chunk of my childhood. Eventually I discovered the FC Twin. Made by Famiclone, the FC Twin is a system that can play both Nintendo and Super Nintendo video games. Just flip the switch to select which operating system you'd like, pop in your favorite game (I had to buy mine all over again, but they were surprisingly affordable) and let the fun begin. I was so happy when I discovered the FC Twin that I considered getting a Princess Peach tattoo to commemorate the revisit to my childhood, a time when things were simpler and more pure.

And apparently I'm not the only one. The galleries over at BMEzine feature no shortage of video game tattoos, with Mario Bros. an obvious favorite. Bowser chases mushrooms, Luigi punches blocks to score coins, Princess Peach reaches to catch an invincibility star while bullets soar through the air with the greatest of ease. Characters definitely dominate the video game tattoo scene, but some people opt for images of the directional pad found on Nintendo controllers or an outline of the Nintendo Game Boy. My favorite is a tattoo of an open-jawed Venus Fly Trap with the words "Byte Me" scrawled underneath. Magic mushrooms are another favorite, symbolic because they were known for restoring Mario's health or making him big so he could obtain fire power and fight his enemies with it.

Of course, Super Mario Bros. are not the only video game tattoos out there. Other notorious favorites hail from Zelda, Mega Man and even Tetris. If you grew up in the 80's and 90's, then these images pay homage to a point in time when our biggest concern was how to defeat level 8-3 or get the magic whistle, a moment of innocence long before we had to grow up and move on into the battles of the real world.