What Do Men Really Think About Pubic Hair On Women

Wendy is a journalist who has been writing online since 2007 on topics such as plus size fashion, learning languages and traveling.

Whether for fashion, appearance, hygiene or just personal taste, most women now get rid of pubic hair. Some only have a little “tidy-up” while others have no second thoughts about going completely bald down there. But whatever a woman’s decision and the reason behind it most women have wondered at least once what men think about pubic hair.

The “hair” issue can be daunting during the first stages of a relationship as some people can take a very strong stand with their likes and dislikes. Here we are going to talk about people who have a strong opinion on the subject.

And you, what do you do with yours?

If you are ever bold enough to ask your partner how would he like your Venus Mound, you will be surprised at his answers and how much you learn about his personality with such a simple question. For a start, his answers might range from:

· “La Totale”, he is very meticulous and won’t accept anything else but bald. He is glad you finally asked because he did not know how to tell you!

· “You are perfect like that”, he is either completely in love with you and accepts you no matter how or he is desperate and just thankful that you are there.

· “Leave it to grow”, he thinks that pubic hair adds mystery to a woman’s anatomy. Certain souls are more susceptible to the works of Mother Nature and prefer to ignore certain parts of the body that should be hidden anyway.

· “Can you manage a diamond shape”, now he is either a compulsive card player or a jeweller.

· “Brazilian please”, now he is either planning for a beach holiday or he just had a holiday with a Brazilian girl.

· “Later, can you get me a beer now, my team is about to score”, needless to say, you should be changing partners ASAP. 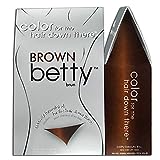 I do prefer a very trimmed and even a waxed look down there but I had to try the Betty Beauty Hair Coloring Kit above I was just too curious to let it pass. The results? It worked really well, it lasted less than a month but I got enough for three applications out of my package, which is not bad considering the price.

A thumbs-up product for hiding grey hair or simply updating to a fun-colour like blue or pink.

Is it Safe to Dye Pubic Hair ?

· “Personally I prefer hairless fashion. At the start, my girlfriend didn’t until I managed to ask her to go shave ALL pubic hair”

· “A woman should keep some pubic hair, otherwise, it is ugly to see all the bits hanging like an open wound”

· “The bald look reminds me too much of a young girl, it puts me off”

· “The metro ticket, that’s perfect for me”.

· “I am very visual, with hair all over the place I cannot see anything”

· “Women should shave 100% including the rear area”

· “I love shapes, it shows me that she has made an effort to impress me, like for Christmas when my girlfriend had a Christmas tree design there”

· “I like shaving her myself, it is part of the foreplay when we are in the shower”

· “The less the better for me, with fewer obstacles in the way it is easier to find the sensitive points”

· “No hair is better for oral sex, if she asks me I would shave too!”

Should You Shave Your Pubes?

Although not my preferred method, I do shave from time to time. I have tried many brands and by far, my favourite one is the Gillette Venus Extra Smooth Swirl Women's Razor. The blade refills are easy to change and they just glide over your skin. I also notice that with this brand I get less "accidents" probably due to its ribbon of moisture around the blade which helps protect from cuts.

They are more expensive than most disposable razors but are well worth the money. 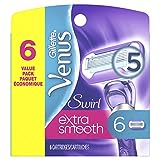 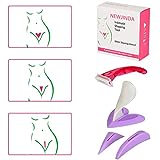 If you are shaving your private parts this can be a lot of fun. Newjinda (Amazon product above) offers a Bikini Trimmer Shaver for Women with a heart, straight and triangle styling moulds, to create special shapes. This has been my preferred brand as the moulds are way smaller than the other brands and you only need to buy it once and then just use it with any other shaver. In fact, I preferred using it with a different razor.

Did you know that there is such a thing as a Pubic Hair Wig? Believe it or not, YES, it is called a Merkin and had been used for centuries by women who didn't have pubic hair!

Kate Winslet revealed in an interview that she had used one during the making of the film "The Reader. " Heidi Klum has also been known for wearing a red-heart shaped merkin.

The pubic wig is not a new invention, it has been around since the 1400s when it was originally worn by women who had shaved their pubic hair off to prevent lice.

And you what do you think? Do you prefer your women hairy or hairless?

Gentlemen, what do you like to see in your lady?