What is it about Redheads?

I love learning new things, especially things that make me laugh and can be implemented into life. It's okay to not be serious all the time

Everyone has read passages that are intended to give you a breakdown of your personality. The analysis is given using your eye or hair color, birth year, astrological sign among other things.

I wanted to have a little fun, since I get so many comments about my hair, I decided to check out the history and varied perceptions of Red-Heads.Tell me what you think, do your physical characteristics help portray your personality?

The color red is, by itself very bold and deep. Words that are commonly associated with the color is hot, love and sexy. The perception of someone that is born with red hair is feisty, opinionated and seductive or in some incidents the complete opposite; homely, pale and quiet. There is a very popular stereo type that red-heads are either drop dead gorgeous or completely unattractive.

With only 2-5% of the United States population having natural red hair, red-heads tend to stand out in a crowd, and perhaps that is why so many with this rarity tend to protrude confidence, amongst other things. The country that has the most number of natural red heads is Scotland with 13% and then Ireland with 10%.

Redheads have something special- don't you think?

Why being a red head is awesome

If you ask a hair stylist about red heads, they will probably say that the majority have a lot of it. Red heads tend possess thick hair, which is not a bad thing. The average number of actual strands which make up a head of hair is 100,000. Blondes have 120,000 and Red Heads top the list with 900,000 stands of hair on their heads. That is an abundance of hair in comparison. Unlike other natural hair colors, redheads do not go gray. Their hair turns a bit sandy and then white, but they do not go gray.

Can you pull off being a Redhead? 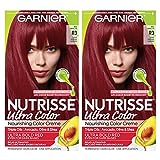 A little bit of History about Red Hair

Being born a redhead was not always a positive attribute.

During Mid-Evil times, many of redheads were burned alive for being witches-simply for having red hair.

It is said that it wasn’t until the era of Queen Elizabeth I, that red hair was actually considered a unique desirable characteristic.

"Red hair is the first visible human trait, or phenotype, that is linked to anesthetic requirement," says anesthesiologist Edwin Liem

Ten red-haired women between 19 and 40 years of age and ten having dark hair were given a commonly-used anesthetic in the study. After each dose of the anesthetic, the women were given a standard electric shock.

The process was repeated until the women felt no pain. Their reflexes were also monitored to assess the effectiveness of the painkiller. The researchers found that red heads required 20 per cent more aesthetic to dull pain.

Why is this? It is because, in people that have natural red hair, the cells that produce skin and hair pigment have a dysfunctional melanocortin 1 receptor, which requires more anesthetic.

You will always notice the redhead in the room

Here are some quotes and jokes about redheads for everyone;

1. How do you get a redheads mood to change?

2. Why are there not more redhead jokes?

Someone was stupid and told a redhead.

3. Man you ain't lived until you had your tires rotated by a redheaded woman

4. Gentleman may prefer Blondes, but it takes a real man to handle a redhead

5. What is the difference between a redhead and a computer?

A redhead won't accept a three and a half inch floppy !

I refuse to apologize for my red hair or attitude.

As for me- I have Irish and Scottish blood running through my body. I have two brothers and two sisters, and I am the only redhead in my family for three generations. My astrological sign happens to be Scorpio. Which goes right along with the characteristics associated with redheads. I am a crazy- intuitive- emotionally spun girl...and I refuse to apologize at all for any of it.