Tessa Schlesinger is an ardent minimalist, convinced it is the only way to combat climate change in a world gone mad with consumerism.

Plastic, throwaway razors cost consumers between $400 and $1000 per year. However, the environmental cost is even steeper, and the irony is that they give the worst shave imaginable. The safety razor, in use until the late 70s gives a smoother shave, with fewer cuts, lasts between 5 and 20 years depending on the make, and costs between $10 and $60 per year. It’s also a superior green option if you’re environmentally friendly.

Safety razors are hardier, last longer, and are cheaper

I bought a safety razor five or six years ago on Amazon for $3.50. It finally gave up the ghost a few days ago, and I bought a new safety razor for about $1.70 which included five blades. The point is that they are incredibly inexpensive. On the same shelf that I bought my safety razor which will probably last me another five to ten years, there were plastic disposal razors ranging anywhere from $11 to $40. Packets contained between three and five disposable razors, and blades ranged in price from about $8 to about $30. Generally blades for a safety razor come five in a pack, and cost about $5. Each blade lasts between three and ten shaves, depending on how close a shave you want, and how much hair you are removing.

Multi and Single Blade Disposable Razors are a Bad Buy

Benefits of a Safety Razor

An entertaining vintage-style video on how to shave with a safety razor!

History of the Safety Razor and its Current Resurgenace

The first safety razor was invented by William S. Henson in 1847. Although he did not call it a safety razor, he did apply for a patent.

Fredrik and Otto Kampfe of Brooklyn from New York made the blade a little further from the handle and, subsequently, A patent was issued to them in 1880 for the first safety razor. The purpose was to enable people to shave themselves in relative safety. A straight razor was generally used by a barber and it required some expertise in order to prevent a nasty accident.

In 1901, King Cambell Gillette made another innovation and submitted an application for yet another patent. This was granted in 1904.

The first safety razors used only a single-edge blade but in 1920,Schick Razors invented the double blade, and that is the one that is in use today.

Safety razors are making a huge comeback as several companies have opened their doors to focus on selling them. The top two safety razors are said to be the Seki Edge Stainless Steel Safety Razor and the Merkur Progress Adjustable Safety Razor. However, they are pricey, and a $4 safety razor will do just as good a job.

Shaving Tutorial for both men and women

Here's a quick tutorial for both men and women on how to use an old fashioned razor.

This is a straight razor - not a safety razor

Have you ever used a safety razor before? 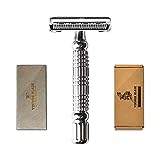 VIKINGS BLADE The Chieftain Double Edge Safety Razor (Neutrally Aggressive)
I have used many safety razors throughout my life. Some have had a longer lifespan than others (ten years) while others have had a lifespan of only two or three years. However, I have found that all safety razors give a smooth,close save with no razor burn. In addition, the razor for mn is identical to the razor for women. There is no difference. A safety razor is a safety razor! Best buy you will ever make! So buy the razor that you can afford! They come in a different price ranges.
Buy Now

My daughter wasn’t haven’t anything to do with my choice to buy a safety razor. Then one day, having run out of disposal razors, she used my safety razor. “Mum, wow! I can see why you use it. My legs feel so smooth and I didn’t cut myself.” She’s been using one ever since.