What is Yellow Jade, Its Value, History and Meaning

What is Defined as Yellow Jade

True yellow jade refers to yellow nephrite, a variety of nephrite. It is one of the rarest types of jades, and can be as light as a lemon, or a dark golden color. They are found in Japan, Myanmar, Guatemala, California, and in some parts of Alaska. In China, it is mostly found at Ruoqiang of Xijiang, Qinghai, and Xiuyan of Liaoning. The jade mined from different locations show various features in color, degree of smoothness and some more. The yellow coloration is caused by ions getting into the crystal lattice, and the element tantalum, so it is the color of its own, that is of the original chromophore, rather than the secondary chromophore. This is an important base for judging yellow jade.

Yellow Jade: Most Valuable in All Jades

As a rare species in nephrite, yellow jade has a long mining and employing history, and it continues today. Yellow jade has a long history of use as artifacts since the Neolithic. The value of high quality yellow jade with pure color is comparable to or even surpassed the mutton fat jade (white jade), and closely followed by more and more collectors.

Anyone who tells you yellow jade is a type of jadeite does not know anything about it. 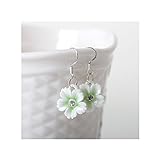 During the Ming and Qing Dynasties, yellow jade was also used at a large scale. Gao Lian of the Ming Dynasty, had this to say about jade in his "Eight Rules to Respect Life" (my own translation, not sure if that is accurate): "Sweet yellow is the highest in jades, suet-like jade (the white mutton fat jade) the second; yellow jade is difficult to get while white jade can be seen from time to time, that is why white jade is treasured more than yellow jade because of its scarcity." Literatus from Ming played jade appreciated yellow jade the most precious; to the Qing Dynasty, yellow was only monopolized by the Royal; the respect by the Royal about yellow jade pushed its status to a peak in history.

The representative yellow jade artifacts in the Ming and Qing dynasties were mostly containers and utensils made in large size. In recent years, these large size artifacts have often been seen in auctions, and they are often sold for very high prices. Since the Qing dynasty, there had been very limited production of yellow jade for the last century.

In China, yellow jade symbolizes wealth, good fortune, friendship, and loyalty. Golden colored yellow jade is mostly used for artifacts, it is also made as jewelry, such as necklaces, and large round-beaded bracelets. Some believe that jade can help a range of ailments including problems with the kidney, heart, larynx, liver, parathyroid, spleen, thymus, thyroid, bladder, and even eyes. Yellow jade is thought to aid poor digestion. Read more about Chinese Jade: Culture & Meaning.

Ways to Determin the Value of a Yellow Jade

As a species closely watched by many collectors, and with very scarce productions, the rarity and value is far higher than the suet jade. But it's worth noting that not all yellow jade has such high value. There are three perspectives to evaluate quality of yellow jade.

Color - Although there is no quantitative standard, in perception, it can be measured from both the hue and saturation. The color tone needs to be pure with least amount of impurities, or the yellow tone will be off which affects our visual perception. In addition to pure color, good saturation of the yellow jade should also be high. Not enough saturation will form light yellow which has negative impact on the value of the jade.

Texture - A quality piece of yellow jade should have smooth and soft texture with little cracks.

Craftsmanship - With good workmanship, the charm of a yellow jade will be fully displayed. With delightful and bright color, gentle and soft look, plus superb craftsmanship, the work of art would give us multiple aesthetic feelings, therefore yellow jade artwork is highly desirable and collectible. Due to its rarity, it is justified that some people list yellow jade number one in nephrite with great potential in collectible values.