When most of us used to think of branding, the thought of identifying the cattle of their owner is what came to mind, that has changed since those days, and branding and branding irons now have multiple uses and purposes.

While most of the purposes of branding remain the same, in that someone wants to be indentified for the work they've done or the cattle or livestock they own.

Human branding is different in purpose, and the process is different, although the results are the same: a scarred mark remaining where the brand was applied. In that sense, all branding ends up with the same result of producting a scar.

It's just that scars can be left on animal or human skin, or inanimate objects like wood and leather.

Today, branding irons are largely determined by how they're heated up, and there are several ways of doing it.

Heating in a fire

The first one is the one most of us identify branding with, and that's the one heated in a fire, as the cowboys of old did to allow cattle owners to mingle their cattle together while they fed on the range together.

While still used today, it's not as efficient as the newer ways of branding. It doesn't do as good a job and it takes longer to heat and apply the brand.

Even so, it's far less expensive, and can be used on all types of surfaces.

We all know not to touch dry ice with our bodies, and for good reason, it can leave a mark just like a heat burn would. That's the principle behind freeze branding, which can utilize coolants like dry ice and liquid nitrogen.

As far as use with animals goes, it works on the hair cells by causing damage to them when applied, where white hair will grow out in the shape of whatever the brand was.

With darker colored animals this is done fairly quickly, as the white hair growth comes easily and quickly. For lighter colored animals, the brand must be applied for a long time until the hair is destroyed, and only the skin will remain.

If you've ever had or used an electric toaster, you understand pretty much how an electric branding iron works.

This particular branding iron can be used in just about every branding situation there is, and is built in different ways depending on the surface being branded, and the size and shape of the branding iron needed.

Propane and electric branding irons operate in a similar fashion and for similar uses, with the propane branding iron being used in situations where there is no electricity avaiable, and there's the need for mobility.

Those propane branding units built commercially can heat up a few branding irons at a time.

What branding irons are used for today

We already covered the livestock part of the branding equation, so we won't revisit that. But there are several other surfaces that are used to brand on, and we'll talk about those now.

There are a couple of reasons behind branding a steak.

One is in connection to branding in a way someone would brand a product or company. For example, some chefs and weekend barbecuers like to stamp their mark on the steaks to let it be known it is there work.

The second reason is more practical, which is to communicate to others what type of steak it is, in the sense of whether is it is well done or rare, etc.

The branding of wood is the same as livestock in that the brander wants to identify the work as coming from a certain company or artisan.

Identifying the craftsman behind the work is the reason for branding leather. This is used prominently among those making horse tack. They apply the brand instead of using steel stamps.

The branding of human skin is an entirely different practice, although the practicals and principle behind it is the same. 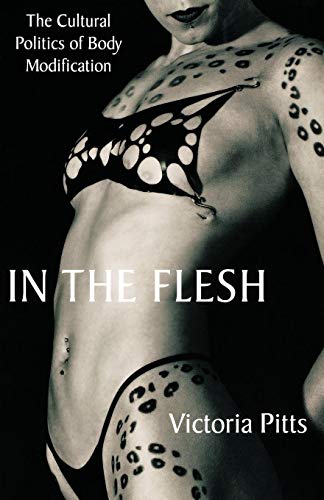 In the Flesh: The Cultural Politics of Body Modification
Buy Now

There are two ways of branding or scarification of human skin, and both involve the use of heat.

What happens in both cases is a third degree burn is inflicted on the skin, and when it heals, whatever the design was is left to see via the scar tissue.

The two ways of human branding are called strike branding and cautery branding.

With strike branding, a sheet of carbon steel sheet metal is used, which is cut into small one inch strips. Taking the small strips, they are then bent or cut to the desired design.

From there the pieces are laid on the skin and the edge of the steel is heated with a propane torch. Once it reaches the desired temperature, it is pressed against the skin for a brief moment, which is called a strike. This is done with each piece until the design is completed.

Strike branding is similar to the principle used to brand lifestalk and other surfaces. Cautery branding is different in that it's more of a carving or cutting than a striking.

Here you have a design on the skin and a surgical cautery pen (which is very hot) is taken and used to draw along the image on the skin.

If the person doing the work is talented, the finished work can include a much more detailed image than that done by striking.

One short term benefit over striking is there is no immediate seams that are seen with the cautery method, while with the striking method there temporarily will be seams in the design, although that ultimately turns seamless after time.

Even so, the cautery method leaves more of a natural flowing look, like a brush was used, while the strike method has more of a rigid look that comes from using steel, even if it ends up seamless.

While branding isn't something thought about in normal human activities, it's surprising how pervasive and extensive it is, and how the tools and reasons behind it have stayed the same for so long, and at the same time is changing as people voluntarily enter into the experience.

From branding livestock, the evolution of branding irons and methods, to human branding, it has become a part of all our lives in a way that we take for granted, but means different things to different people, depending on how it is used.