Colognes Worn by Heads of State

GetFactsnotHype is interested in history, and the source of beginnings amongst many of her eclectic tastes.

Colognes of presidents, emperors and royalty

This short list of men's colognes worn by presidents, emperors, royalty and other heads of state is hundreds of years old. Find out which historical perfumery served who and how you can get a heads-of-state cologne collection. Photo credit: public domain.

Farina since 1709 is fit for royalty

In 1708, Italian born Giovanni Maria Farina wrote to his brother that he'd found a scent in Cologne, Germany that reminded him of an Italian spring morning and in 1709 started his business. Photo: PD

Farina named the fragrance "Eau de Cologne" after his new hometown, for Germany was now where he called home. His original fragrance (still made today) was light, citrus based and unisex, however since then cologne has become a generic term and in some countries has a heavy scent and is only for men.

Some countries do not make the same distinction as the United States does between men's colognes and women's perfumes. That's why it is important to note that while many heads of state were men and wore this cologne, notable women such as Diana, Princess of Wales were also customers.

Farina's "Eau de Cologne" reads like a who's who of perfumeries, as the company has been the purveyor of many royal families over centuries. They have many royal warrants that have been issued to them and the Farina family has been excellent historians about this. They have kept documentation of warrants, letters, information on the factory, transport and archives for centuries. You can see Farina Haus's pictures and official documents at this link.

Farina Haus then and now

It's important to note that his name was often germanized for calling cards and instruction leaflets. Moreover Giovanni Maria Farina's name translated is: John Maria Farina (English); Jean Marie Farina (French); but most often was written as Johann Maria Farina for his Germany based location. Photo: PD

Farina gegenüber dem Jülichs-Platz, meaning Farina opposite Jülich’s Place was sometimes used or shortened to Farina gegenüber. You can see the picture above, which shows the use of his name in German including the genenuber added to this 1849 photo.

The birthplace of Eau de Cologne, the company headquarters, and museum are located in Farina Haus in Cologne, Germany. The founder's descendants still run the company, which is the oldest perfumery still in existence in the world. The picture below shows Farina Haus today. Also below is a link to their site for products and pictures of the museum. Farina's website in 7 languages is here.

Creed since 1760 a fave of emperors

James Henry Creed founded the House of Creed in 1760 in London, but not as a perfumer or "nez" taken from the french word meaning nose, but instead was a tailor.

The habit maker and tailor business really took off by the middle of the 19th century under Henry Creed. His tailoring articles were fashioned by Queen Victoria, and the Empress Eugénie, who issued the firm of Creed & Cumberland a Royal Warrant.

Eventually Creed was adopted by all the courts of Europe including Napoléon III and Emperor Franz-Joseph. Incidentally, notable women such as Empress Sissi of Austro-Hungary, and Queen Christina of Spain jumped on the bandwagon. Under the patronage of Empress Eugénie, the House of Creed moved to Paris in 1854 where it established a firm reputation for quality. The educated English at that time also spoke French, so it comes as no surprise that the french word millesime was used in Creed's products.

Over the years Creed has created over 200 fragrances and the business has passed from father to son since its opening in 1760. Using a process that has been abandoned, which is too costly by the modern perfume industry, Creed manufactures many of its own essences using the traditional infusion technique.

Click here for Creed fragrances for men in the U.K.

Click here for Creed's map of stores in U.S. and Canada.

Caswell Massey since 1752 is very presidential

Caswell-Massey began as an apothecary in 1752 in Newport, Rhode Island. Several United States Presidents have found the Caswell-Massey fragrances worthy, but it didn't get its start in fragrances.

Caswell-Massey was founded by Doctor William Hunter and was then called Dr. Hunter's Dispensary, selling medical supplies. In 1755, Dr. Hunter gave the first lectures on anatomy and surgery to the British America's Colonies (aka U.S. colonies). Then Hunter began serving his customers' cosmetic, personal care and hygiene needs. He imported some fragrances from Europe and blended 20 fragrances himself, which he numbered one through twenty (1 -20) . "Number Six" created in 1789 with scents of orange and bergamot was favored by George Washington, the 1st President of the United States. Photo above: digital photo of another photo CC-2.0

For approximately the first 75 years in business, the apothecary shop changed owners as each retiring pharmacist handing over the keys to his apprentice.

Today Caswell-Massey sells soaps, shaving products, and other apothecary style personal care products, some of which are in glass bottles with the apothecary-like stopper. They also sell products for women.

President Eisenhower (Ike) favored Caswell's scent of almond and President Kennedy (JFK) favored "Jockey Club". Although the Jockey Club scent was produced much earlier in the 1800's, it found its way to JFK and the fragrance is still in production today. Many of the presidential-faved scents disappeared for awhile, and were later reintroduced to kick start the company again, however the original Newport store has closed. Click here to see the timeline and history of changes of the company. Photo credit: share site - photobucket by thermocafe

Another interesting merit of importance is that General Custer (previously Lt. Col. George A Custer) had used a toothbrush sold by Caswell-Massey and it can be seen at the museum at the Little Bighorn Battlefield National Monument.

Additionally, Caswell-Massey supplied toiletries for an educational reality TV series called "Frontier House" that originally aired on PBS in April 2002 with 6 episodes. The series focused on families in a rural setting in 1883, and the toiletries Massey supplied were those available to such pioneers for the time. These items included: 3-pound blocks of Castile soap; straightedge razors; and toothbrushes like the kind Custer had used.

Caswell-Massey has one retail store in the United States, but also sells products through department stores and specialty shops as well as online and by catalog (catalogue). I'm supplying a link for colognes, after shave splashes and after shave balms sold by the company. If there is not a retail store close to you, Americans can purchase the items at Amazon, whereas the U.K. will need to use the link I am supplying. When you get to the Caswell-Massey fragrances for men page, just choose between colognes or aftershaves.

Caswell Massey is a favorite among Presidents of the USA. 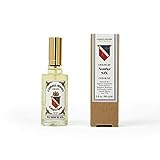 One of the founding fathers of America, 1st President George Washington wore Number 6 cologne, by Caswell Massey. The product is not tested on animals.

Asbestos free Venetian talc in the Number 6 scent is not tested on animals and has this attractive shaker top canister. 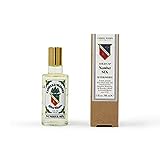 A classic scent, but not too heavy and containing glycerin to soothe, this Number 6 after shave is a perfect compliment to round out the cologne and talc also available in the scent of the same name. 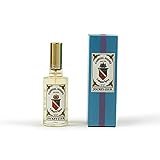 President Kennedy liked the Caswell Massey Jockey Club scent. Still in production today, you too can own the same scent JFK had as one of his favorites. 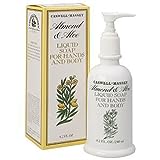 President Eisenhower kept this Caswell Massey scent on hand at the White House. This 8.2 ounces of liquid soap with pump dispenser in almond scent is the same brand and scent Ike had used.

There are a few other cologne companies /houses with historical scents, and although not as old as the previous list they are worthy of mentioning. Penhalgions and Truefitt & Hill are also in existence still today.

Penhalgions started in the 1860s, was worn by the 11th duke of Marlborough, who is of the Blenheim bloodline. "Blenheim Bouquet" is one of their best selling colognes for men, although it was first worn by women. Incidentally, Blenheim Castle can still be toured today, and is the birthplace of Sir Winston Churchill. Additionally, Wikipedia also shows that Penhalgions is a selected Royal Warrant Holder of the British Royal Family by Appointment HRH Prince of Wales, and HRH (his royal highness) Duke of Edinburgh. Photo: Gryffindor CC Attr SA 3.0

Truefitt and Hill located in the district of St. James in London has had mergers and name changes since it's opening in 1805. They started as hairdressers to the Royal Court and are the longest surviving barbershop. They are a Royal Warrant holder of hairdressers by appointment to Prince Philip, the Duke of Edinburgh. Truefitt reads like something straight out of Debrett's serving such clients as: Members of Parliament, Ambassadors and the diplomatic service. "Trafalgar" is one of their popular scents.

Another favorite of Truefitt and Hill is their scent titled, "Freshman" for its clean smell. Freshman is a light and revitalizing marine fragrance. I read somewhere that some shave products bearing the former name Truefitt were found as personal effects for a Titanic passenger, however the picture has been removed from the web. T&H has many crisp and clean fragrances, which is similar to that of the "Gendarme" colognes worn by former U.S. Presidents George Bush Sr. and Bill Clinton. Their items can be bought from stores in Toronto, Canada at Scotia Plaza; Chicago Illinois, USA; and Las Vegas, Nevada as well as their website.

Penhaligon's in US dollars

Truefitt and Hill and also Penhaligon's in U.S. Dollars 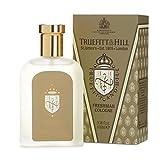 Men's Cologne - one of T and H's light, clean scents

Sample a smaller size of Penhaglions 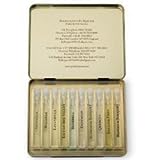 Cologne Comments - Comment OR check out my other page