Colonial America was a great period in men's clothing styles, with practical garments that were easy to move in and flattering to every figure, from the big and tall man to the stripling youth. Here you'll find a detailed checklist for men's colonial costumes with notes on men's clothing styles of the 18th century colonial and American Revolutionary period.

Find where to buy colonial men's costumes for any purpose - for community theatre and school plays, for Fourth of July parties and parades, fancy-dress and Halloween, or more authentic patriot garb for historical re-enactments.

You can even make your own colonial man's costume or adapt your own men's clothing to 1770s style with just a bit of straight basic sewing and a few well-chosen accessories. Read on for lots of colonial men's costume ideas!

What Kind of Colonial Man are You?

Many Civilian Roles for Men in 1700s America

The colonial period in America may have been fraught with conflict but by far the majority of men were for most if not all of their lives in a civilian role. In this realm, however, the costume of the Colonial Man we normally think of is that of the townsmen of the Thirteen Colonies, for the most part - but just consider the variety of options you have!

For example, what clothing did the rough-and-ready woodsmen and country farmers of the 1770s wear? What kind of clothing was worn by the colonial-era merchant seaman, privateer or pirate? What about shipyard workers, blacksmiths and farriers, wheelwrights and carters, the servants and stable boys who worked for the wealthier families? Colonial America had its lawyers and judges, too, with a rudimentary system still modelled on the British courts, so the officials were black-gowned and wigged accordingly... and so on, and so on.

Every role in society would have its own typical clothing styles, so your costume choices are wider than you might at first think.

Patriot Soldiers of the American Revolution

When you're putting together a costume for a colonial man, the first thing to consider is how authentic you want or need your costume to be. What is the occasion? and who are you going to be? A specific historical figure, or an ordinary Colonial Man about town?

For example, when you will be playing a distinctive character - such as George Washington, for example, or Ben Franklin - your costume will need to be sure to include those items we associate with those historical persons, especially in the matter of finding the right wig for the character. Ben Franklin is normally seen with a well-balding forehead and straight long hair, of course, and a Ben Franklin costume will also his characteristic small round spectacles to be complete.

Men's Colonial Theater Costume, Black, Medium
Otherwise, for most civilian gentlemen, a good-quality basic costume such this black suit with coat and breeches will likely be most flexible to fit a variety of roles. The amount of lace on the jabot and cuffs and the type and quality of the footwear can help to distinguish the prosperous man of business from the small land-owner or shop-keeper who is dressed in his Sunday best.
Buy Now

Find a Costume to Suit Size and Budget

Size and price are two other items to think about. Big and tall men will have a more difficult time than standard sized men to find a ready-made costume, although you will find a few on this page. Off-the-rack costumes or a few key costume pieces mixed with your own gear will be the least costly way to go, but the infamous "one size fits all" is usually NOT the truth, in reality!

Any size of colonial-era clothing can be had from a theatrical costume supplier or made to custom order, of course, but suppose that your budget may not stretch to custom gear or a professional outfit? Fortunately, I've got some suggestions, below, to help men (of any size and shape) get suited up for the Fourth of July without breaking the bank.

First, let's run through a quick checklist of those must-have items of clothing and accessories for a Colonial Man costume.

If you are dressing up as a colonial soldier - either Patriot or British Redcoat - or a military or naval officer (on whichever side of the Revolutionary War), your costume will call for finding an appropriate uniform. That's quite straightforward for the officer class on both sides and for the redcoats. The dress of the militia man or the ordinary recruit or volunteer, however, was much more modest, even in the earliest and most prosperous days of the conflict...

Photo: 225th anniversary re-enactment of the Battle of Rhode Island 1778. American Army marches south down the East side of Rhode Island to Engage the British. Photo by Graemesmith, [CC-BY-2.5], via Wikimedia Commons

The ragtag common foot soldiers of the American patriot forces were frequently clad in whatever they could cobble together from their own clothing and limited kit issue. Later on in the War, as supply lines stretched thin and funding failed, it was increasingly likely that the soldier's costume would have included a few worn cast-offs from injured or fallen comrades, or bits and pieces of clothing that were scavenged along the way.

If you can sew, or have access to someone who sews - and if time permits - then making your own costume is often a good way to go. Butterick sewing patterns have always been a reliable choice for my projects (as have Simplicity and McCalls patterns).

You can sew the entire wardrobe from underwear "drawers" to breeches and trousers, and from shirt to waistcoat to an impressive over-coat with broad facings and sweeping skirts, in 1700s military style or for the patriotic civilian of the period.

Shop the remnants section of your local fabric store for the materials, and you'll have a fabulous colonial costume made to fit perfectly - often it's the best option for hard-to-fit extra large or extra tall men.

Here are just a couple of the sewing patterns for appropriate costumes you'll find for sale at a reasonable price. 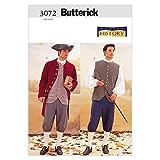 Butterick B3072 Revolutionary War Historical Men's Costume Sewing Pattern, Sizes 44-48
The comprehensive 5-piece pattern shown here includes all the main pieces you'll need to create a man's colonial costume - and be confident that it will fit as it should. This pattern is for a man's colonial costume in Size 44-46-48 (three sizes, depending which cutting lines you choose), but you can also find it in Size 32-34-36 and Size 38-40-42.
Buy Now

What costume would you choose? - A bigwig like George Washington, or an ordinary patriot?