The Classic Fedora Hat Worn by Humphrey Bogart in Casablanca

It became really evident in the 30's that the Fedora Hat had become increasingly popular.

But then along came Humphrey Bogart as Rick Blaine and the hat became that persona that men wanted to capture. And of course that meant not only had it taken off in Hollywood but on streets all across America you could find men heading to work, to dinner or just out for a stroll wearing that very hat.

Fedoras were made popular by many Hollywood stars and gangsters of that time but no one could quite compare to Humphrey Bogart in Casablanca.

That hat worn in Casablanca was felt, creased along the crown and pinched just so in the front and on both sides.

If you are a Humphrey Bogart fan or maybe just a fan of Casablanca, you know besides the fedora hat worn in Casablanca, there is the infamous trench coat.

These hats also became popular during the prohibition-era when gangsters and the detectives who sought to bring them to justice had made them part of their everyday wardrobe.

Later in the 1940s Hollywood movies, stars often wore them, especially when they were starring as private detectives, gangsters, or other "tough guy" roles.

Although there have been several stars since that time, Humphrey Bogart took the popularity of these hats to a whole new level. 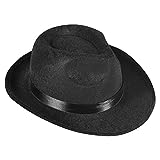 A fedora is a soft felt hat that is creased lengthwise down the crown and pinched in the front on both sides, and is sometimes associated with prohibition-era gangsters and the detectives who sought to bring them to justice. In Hollywood movies of the 1940s, characters often wore a fedora, particularly when playing private detectives, gangsters, or other "tough guy" roles, a related example being Humphrey Bogart's character in Casablanca. More recently the Blues Brothers wore fedoras as well.

The Fedora hat and trench coat became somewhat of a costume for many performances to come in Hollywood.

You almost can't picture Humphrey Bogart, aka "Rick Blaine" in a performance without that infamous hat and coat.

Many stars since then have went on to portray the gangster, the detective, or just the cool guy in a fedora hat much like the one worn and made famous by Bogart in Casablanca.

Decades later Fedora hats have made a comeback in the fashion world and can be found in multiple styles, colors and price ranges. You can either go with a cheaper costume hat or a top quality custom fedora.

Although it lost some popularity in the 50's, it has come back with a vengeance. With today's stars like Matthew Bomer aka "Neal Caffrey", Brad Pitt and Johnny Depp just to name a few, all wearing various different styles of the Fedoras, they are one of the hottest fashion accessories a man (or woman) can have.

They can be added to any wardrobe style including the sleek dressy suits to the casual jeans and a t-shirt.

Sincethey are made from a variety of materials, wool blends, straw or felt, they can be worn in the coldest of winter to the hottest of summers.

There is really no limit to the number of hats you might add to your wardrobe, but be sure to look for one that is crush-able if you travel a lot as they will retain their shape easily.

So whether you get a classic like the Humphrey Bogart fedora or a more modern fedora like the Neal Caffrey Hat, you simply can not go wrong!

Who's Your Favorite Celebrity Wearing a Fedora Hat?