Goth is an attitude

The Gothic culture is built and based really upon one rule, and that is an attitude of individuality which expresses who you really are rather than what you want people to think you are.

So that of course generates a lot of creativity and individuality within the subculture, which makes it impossible to define.

That's the same with Goth makeup, which is more about your attitude than about the actual way you want to define your look through makeup.

Just like Goth wannabees who attempt to outwardly look like a Goth through wearing similar clothes, accessories and makeup, they can be spotted a mile away because you can't fake it.

Does that mean there's no rules whatsoever with Goth makeup? In theory yes, but in practicality, like the Goth subculture, there are identifiable practices which at least point to a person as presenting themselves as Goth.

Like in all Gothic practices, there are a lot of exceptions to the flexible rules, but like shoes, trench coats, corsets and other accessories Goths wear or use, there are a number of them the majority of Goth culture uses, so you can get a pretty accurate idea of who they are and what they're saying through what they wear and the makeup they use.

We'll show some exceptions here, so you can see the rules are very flexible and just barely predictable.

This person below, which seems to be a guy, evidently really likes the color blue. I understand the desire to express yourself and everything, but this just doesn't look good to me. Although admittedly I'm not into guys wearing makeup, and that is one strike against this makeup job.

But even putting that aside, it's not that well done, and has the look of a messy clown than anything else.

I would probably appreciate this makeup job below if the woman was really a Goth, but it seems she's a model that makeup artists tried hard to give the look. But when you know what real Goths look like, you can usually identify those that aren't.

I could be wrong, but I don't think she's a real Goth, but the eye shadow part is a lot of fun, and her stern look attempts to mimic Goths who don't like to smile in order to impress someone.

What most think of Goth makeup

I know there is no such thing as a typical Goth look in any area of the Gothic lifestyle, but there are patterns that can be followed and relied on a prevalent in the subculture, and this Gothic makeup look, and general Gothic look in general, is definitely close to what most people think of when thinking of what a Goth looks like. She does look good without really looking mainstream.

The problem seems to be that so many fashion designers have borrowed from the Goth look and brought it to the mainstream, that this looks too familiar in a way, even though it's very Gothic and looks great. 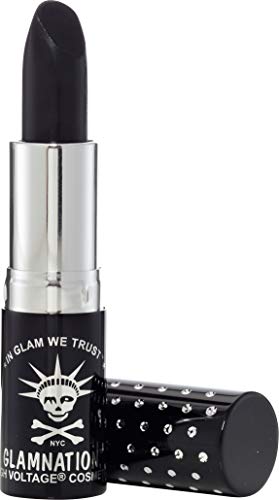 While this woman is obviously a model, the one taking the photo and commenting upon it was a Goth, and she felt this was a true representation of the Goth look and attitude. It definitely is different than most Gothic makeup I've seen.

All Asian Gothic women don't go this route, but a large percentage do, and I think it's similar with them as it is with American and British Gothic women who borrow from the dress of the Victorian age. In this case, it seems the Asian women are borrowing from their Geisha history; at least Japanese Gothics do.

But Asian women aren't the only ones who like pale, and this type of pale isn't the only foundation used for that purpose, as we'll see in the next photo.

I do like the choice and contrast of the red hair against the pale foundation. It looks really good and works well.

Asian Makeup and the Pale Look

Here is a unique pale blue Gothic makeup foundation that is a lot of fun, and you could do all sorts of things with once you have it on. Pretty bold, but I'd like to see what type of Gothic fashion and accessories would go with this.

This particular pale makeup foundation was included to show how you can take a pale look and do something completely different with it.

You notice the light touch of red in her cheeks in contrast to the bold red in the woman's foundation a couple of pictures above. She also has the spider eye thing going, and in this case it works and doesn't look bad at all.

I really like this pale makeup foundation because it is done so well, and the dark eyes just stick out at you without being too much. And the subtle pink hair and lightly colored lips make this really work good.

In this final photo, I came back to a more traditional Goth look, although I know many of you Goths reading this wouldn't accept that definition. But I'm talking about how an outsider views the Goth look, as most wouldn't have thought of the pale foundation makeup look as being Goth, even if it is.

So for better or worse, those on the outside looking in think of how this woman looks, and the one near the top of this article. as what a Goth woman looks like.

So if you're not a Goth, you can see how different the use of makeup can be, as well as many other fashions statements they make. The key thing to understand the subculture in general, is to remember that they consider themselves as defining what Goth is on an individual basis. So in essence, Goth is what every individual who has the attitude of a Goth says it is.

In other words, Goth is really undefinable, although, like shown here, there are some basic and fundamental practices many of them partake in, but that's based probably more on the attitude which then expresses itself in similar ways, than a planned out uniformity, which really doesn't exist.