How To Wear A Fedora Hat

How to wear a fedora without looking like Indiana Jones on a mission? Easy - unless you do actally fancy yourself as a world saving and somewhat tattered hero.

And if that's the case, I'd advise you to stay well away from fashion, cameras and mirrors and instead, arm yourself with conspiracy theories, ancient maps and a bullwhip.

The biggest problem most people may have is the fact that they lack that certain something to carry a Fedora off.

You do need an air of utter nonchalance - otherwise you'll look as though you and your hat are a match made in wallmart - rather than one made in Macy's.

Aim to look cool - and not like a tool, by applying the hints and tips you'll find below.

How To Wear A Fedora

I'm going to show you how to wear a Fedora hat - and you're going to take notice. I did have a model, who was going to expertly evidence the difference between cool and tool.

However we have not managed to meet in the middle, therefore he, his tweed feodra and this hub have become polar opposites.

Still, no matter, where there's a will and all that. And many of you really do need to know the difference between ... hot and not!

And so - how to wear a fedora hat.

Generally, they belong in the realm of mens fashion accessories however, of late, women have adopted the chic appeal that goes with donning one atop their feminine heads.

Hence their rise (once again) in popularity and metrosexual appeal. Don't got a Fedora? Don't got nothing!

There are loads of different mens fedora hats - giving you, the wearer, a whole lot of choice.

In truth, it's easy to wear them the wrong way. And to be fair, the guys that look best in them are those of a Latin descent or African American. They were born cool. Hat or not.

Maybe it's the skin color, I don't know but some guys just got it and some guys just don't. That said - you can still learn how to wear a fedora and look the part, providing you own the fedora and not the other way around.

Best thing is to avoid thinking along the lines of mobsters and Mafia dons. They weren't cool ... they were cruel.

Still they were sharp dressers. Which is what you need to be. Sharp, casual, on trend and hip. With absolutely no hop in sight.

How To Wear A Fedora Men

Here we go, the lowdown on how to wear a fedora - men:

More than anything, enjoy your hat. Don't overdo it - if anything under do it. And in the event you're really stuck try the fedora forum.

Honest there really is one and there you'll find a whole bunch of guys who advice and counsel each other about what to wear, what not to wear and so on.

Oh yes ... you want an Indiana Jones Fedora hat. And why not? Indy is cool to the chromosones and the hat and the hero are mutually exclusive.

Put yourself out of your misery - look cool, heroic and all without a despotic tyrant in sight. Be cool right through to your chromosones - and do Indy proud! 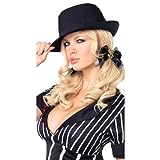 Want a cheap fedora hat? Check out the ones on the right. Cheap as chips yet still stylish and great looking to boot.

The first two are the top selling fedoras on Amazon, with highly positive customer feedback - knowing that others have already received and rated a product makes for an easier choice.

If you're on a budget yet want to get your hands on one, then any one of the three will make a perfect value for money purchase - without looking cheap and nasty.

Now a straw fedora is not to be confused with a straw boater - they're two completely different hats.

A straw fedora is exactly the same style and shape of regular fedoras, the only difference being the material they're made out of.

They're quite the natty hat, for those that prefer a cooler head, as air will circulate better with this particular style of fedora.

You should now have more idea about how to wear a fedora - go forth and ... be cool!