The hottest winter item in Canada is sure to be the new Striped Red Olympic Mittens released for 2013 with a cute red maple leaf in the center and are available for purchase through the Hudson's Bay Company, Amazon.com and on eBay. It's described as a chunky striped red and white knit lined with fleece.

When I checked out the Hudson's Bay Company store in downtown Vancouver, there were striped hats but no mittens to be found. So your best bet is to check out the HBC website or look for a pair online.

It's hard to believe this iconic mitten could get any cuter. After all, they made the cut as one of Oprah's favorite things when she featured them on her show when they were first introduced. That's back in 2010 when Vancouver hosted the Winter Olympics and the cute mitts were worn by the Olympic torchbearers including hockey legend Wayne Gretzky.

In 2012, the year was stitched onto the maple leaf and there are still a few pairs available on eBay and Amazon.com.

On the 2011 version, instead of the white felt maple leaf on the palms, each maple leaf wraps over one side so you have to put both hands together to make a complete maple leaf. They're available for purchase on eBay.

My favorite is still the original version. Just before the Vancouver Olympics in 2010, my Mom got me one of the hottest selling fashion items in Canada -- Prada? Manolo Blahniks? Chanel? A pair of red mittens. Not just any mittens, but Red Olympic Mittens similar to the ones worn by the Canadian Olympic Torchbearers.

Originally priced at just $10 from the Hudson's Bay Company, these colorful, fun Canadian Red Olympic Mittens are no longer available through HBC. The original design which featured a white felt maple leaf on the palm of each hand is no longer sold in stores. Beware of imitations being sold on the internet which sometimes don't have the year stitched in or the Oympic rings. However, you can still find pairs being sold online under eBay listings with the description "rare" or "original". See below for listings.

Funds go towards helping support Canadian Olympic athletes. What did you think of Team Canada's 2012 Olympic Uniform at the opening ceremonies in London? Love the bold Canada stripe or hate it? If you like it and want a sweatshirt, hoodie, t-shirt or tank, check out thebay.com as the official merchandise is being sold by the Hudson's Bay Company.

Which Red Olympic Mitten Do You Think is the Cutest?

If you're collecting the entire series of Canadian Red Olympic mittens, look to Amazon or eBay to secure the last pairs left of striped 2013 mittens. Plus you still have a chance to enjoy them this year before winter's over.

While you can purchase these striped Canada Maple Leaf Mittens on eBay, they are also directly in store at The Bay in Canada or online at HBC.com.

Available From the Hudson's Bay Company For Only $10.

Here are a few Canadian Olympic Mittens for sale on Amazon.com. Click on any of the links below to see the full selection available online. 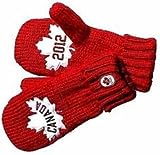 There are three sizes available:

There are no baby or infant sizes available.

Some listings indicate youth o/s (one size) and are being touted as ladies/women's xs or extra small.That is a bit of stretch for a description. The youth size mittens would only fit a lady with very narrow, petite fingers and not meant to be sold as a women's extra small glove. These red olympic mittens are fleece lined so they do not easily stretch as a knit stretch glove. Most women would require the s/m size.

These mittens should fit most men. A friend of mine tends to prefer his gloves to be XL and this L/XL size fits him as well.

A word of caution to first time eBay buyers. Check then double check the shipping prices. Some prices seem low but the shipping and handling prices are $19.99. So just be sure you add both the item and shipping costs to know what you're really paying. If you're buying more than one pair of mittens, check before you place your bid to see if there's a shipping discount when you buy multiple pairs. E.G. $5 shipping for first pair, $3 for the second pair. There may be additional costs to ship worldwide.

If you're new to eBay, there are all sorts of strategies to bidding on eBay where you can have eBay help you win an item with Automatic Bidding where if someone outbids you, eBay will automatically add a certain dollar amount up to a limit to help you win an item. If that sounds too complicated and you're like me and can't be bothered with the hassle of bidding on items, look for Buy It Now items.

How to Buy It Now

1)Just click on any of the items below to link through to eBay.

Results for Buy It Now Red Olympic Mittens sorted by the size you want will show up. Click on each item to see shipping costs.

Last word of advice. Check the number of seller transactions, ratings and comments to make sure you're dealing with a reputable seller. Overall, I have found eBay to be reliable because of this community rating system and there are systems in place should you need to dispute charges if you are dissatisfied with the transaction in any way.

Where to Buy Red Olympic Mittens in Canada or the U.S.?

If you do not live near a Hudson's Bay Company or Zeller's in Canada, you can purchase Red Olympic Mittens online from The Hudson's Bay Website along with plenty of other collectibles.

Where to Buy Red Olympic Mittens If They're Sold-Out At the Bay?

If you can't find Red Olympics Mittens at the Bay online or in store you'll have to turn to the other Bay -- eBay where they will have both the original and new design available from various independent vendors.

VANOC - the Vancouver Organizing committee met sale objectives for these red Olympic mittens and it is unlikely they will take the risk to manufacture more of these dated souvenir items.

According to the Province newspaper, the Bay's online marketing representative indicated there are no plans to replenish stock.

3 million Red 2010 Olympic Mittens were manufactured and sales of 3.3 million have been reported.

I remember the frenzy around Obama inauguration souvenirs -- with t-shirts, bags, posters, books being sold everywhere on the Mall, but even though Obama is still President, the next day, it was a fire sale on anything related to Obama's inauguration.

Where are the Red Olympic Mittens Manufactured?

Over 3.3 Million Red Olympic Mittens Were Sold in 2010

That's 1 in every 10 Canadians wearing a pair of these red mittens to support Canada's athletes. Try the official Olympic Hudson's Bay website where they're once again partnering together with the Canadian Olympic team to help raise funds to support Canadian athletes by selling

Sometimes less is more. ""Scarcity can create a perception of coolness". Read more here about the Red Canadian Mittens from the Globe and Mail in an article about how HBC tries to build on Olympic momentum. 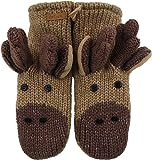 Youth/Adult Peppy The Penguin Mittens by Knitwits - A2029
Buy Now

In the past two years, we've had the chance to live "La Dolce Vita" in Italy with my husband who's a Professor of Architecture who's taught overseas in Rome, Barcelona & Istanbul. It gave me the chance to fulfill my dream of being a writer in Europe by Squidooing while overseas. The perfect day for me here was enjoying a cup of cappuccino, indulging in pastry, shopping at the local food market & writing until I felt like napping.

As a former radio disc jockey, I've always loved music so it's a pleasure to get to indulge my passion for music and movies by writing for Squidoo about movie soundtracks. Click here to see my writing portfolio / lensography of movie soundtracks writing about TopMovieSoundtracks and TopMovieDVDs.

Update February 24, 2011. I just had one of those Oprah "Aha" moments. How wonderfully serendiptious to win "Lens of the Day" about a lens that helps to support fulfilling the lifelong dreams of Canada's premiere athletes. In doing so, it is also helping to support my own personal dreams.

Getting to fulfill my passion for writing is wonderfully satisfying as it is also allows my husband and I the opportunity to live part of the year in Vancouver to spend extended time with friends and family. We also get to spend part of the year living overseas. In Washington, DC, our home base, coffee breaks are replaced by nap time and frequent snuggle breaks with our two fourteen year old cats.

If you're a Squidoo lensmaster who's from Vancouver or Canada or you're just someone who appreciates Canada, show your love and support for Canadian athletes here. Feel free to e-mail me a photo or video of you wearing your red Olympic mittens so I can load onto this web page.