The world's first analog (mechanical) computer, commonly known as the Antikythera mechanism, dates back to the 1st century BC, or a little over 2,000 years ago.

Pieces of the mechanism were discovered in 1900 by sponge divers off the coast of the Greek island Antikythera.

There were many artifacts, including multiple sculptures and statues, bowls, carafes, and oil lamps, and it wasn't until they were scrutinized at the National Archaeological Museum in Athens that the mechanism's worth was truly understood.

The process of detangling the twisted clump of brass and rocks yielded nothing too amazing until two years into the painstaking process.

Were you aware that the world's first analog computer was built over 2,000 years ago?

As archaeologist Valerios Stais was looking at one of the 86 pieces of brass fragments brought back from the dive, he noticed, to his amazement, that it had a gear wheel embedded within it. This would prove to be the most momentous find of the dive, and would change the way scientists viewed the ancient Romans--to say the least.

Though it was originally believed to be a mechanized clock, the Antikythera mechanism is now considered to be the world's oldest analog computer.

No doubt this discovery sounds almost too amazing to be true. It's common for us to want to believe that the people in our ancient past were far less advanced than we are. Yet the evidence is overwhelming and cannot be denied.

It makes me wonder what else has been lost over the ages. What other technology might they have had that we have only recently re-discovered (or haven't yet re-discovered)?

Let's explore the Antikythera mechanism to understand just how amazing a find it really is.

Site of the Antikythera Wreck 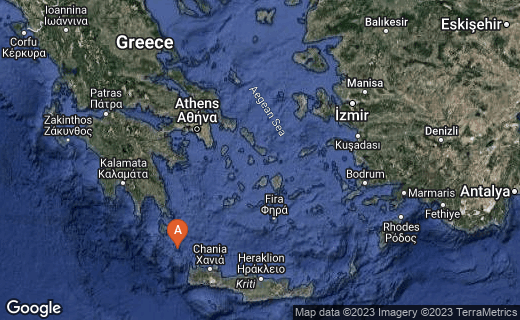 The Antikythera wreck was discovered by sponge divers off Point Glyphadia on the Greek island Antikythera in 1900.

After the Antikythera mechanism was found in 1900, there were many theories as to what it was used for. At the time, they really had no idea, and the artifacts collected dust for half a century. The overwhelming consensus now, after thorough investigation, is that the device was used to calculate and display celestial information.

It wasn't until quite recently (the 21st century) that scientists could form a 3D scan of the artifact to see the complex gear mechanisms within. In addition, though the fragments were incomplete, modern technology allowed scientists to recreate the full machine.

The front of the mechanism shows a single dial placed in the center of the device, around which the Greek zodiac and Egyptian calendar rotate on concentric scales. The inscriptions were deciphered using the 3D imaging techniques described above.

On the back, two more dials display information about the timing of the lunar cycle and eclipse patterns. You may not realize it, but the moon varies its speed due to the elliptical nature of its orbit. The Antikythera computer uses a pin-and-slot mechanism to account for this variance.

When you see it your jaw just drops and you think: 'bloody hell, that's clever.' It's a brilliant technical design.

In addition, words inscribed on the machine seem to suggest the movements of Venus and Mercury can be followed by using the device. These findings have led some scientists to conclude that other planetary migrations might also be displayed.

If all that wasn't enough, the dates and locations of the upcoming Olympic Games were displayed as well. The Antikythera mechanism is an amazingly intricate machine capable of numerous simultaneous calculations.

According to scientists, the complexity of the device would not be equaled for another 1,400 years: it actually wasn't until the 14th century that mechanical astronomical clocks were (again) built in Europe.

Video: Inside the Antikythera Mechanism

Since the computer is missing some of its fragments, which are probably buried somewhere at sea, it allows for some educated interpretation of what the machine was capable of. For the most part, everything is fairly agreed upon, except for how many planets were actually represented.

We know for sure that Venus and Mercury were represented on the dial, but Michael Wright, a museum curator who spent decades studying the device, believes that all five planets known at the time were represented. Logically, this makes sense.

Using what is already known about the mechanisms, he recreated it exactly, but added another three planetary movements (Jupiter, Saturn, and Mars.)

Though technically experimental, he notes that markings on the mechanism allowed for the use of a spindle and bearing that would provide motion to these additional orbs. If true, this brings the number of gears for the Antikythera mechanism up from 37 to 72.

Wright also believes the computer was not just a "one and done," as they say. "The designer and maker of the device knew what they wanted to achieve and they did it expertly; they made no mistakes," he said. "To do this, it can't have been very far from their everyday stock work."