A Computer In The 1830s? - "The Analytical Machine" Was A Mechanical Computer Invented By Charles Babbage In England

What do you know about the very first computer design?

The first simple computers started appearing in the 30s, right? Yes, but you probably have the wrong century in mind. The first true computer was designed a full century before the dawn of the computer revolution by Charles Babbage in the 1830s - ahead of its time by at least 100 years.

It is called the Analytical Machine or the Analytical Engine and it was designed to be a programmable general-purpose computer that would handle a variety of tasks. It was going to be practically a building and was designed to operate using rotating cogs and other mechanisms in order to achieve true computation. Its design actually includes the most important parts of a modern day computer like CPU, RAM and I/O options, achieved through very different means thought.

Charles Babbage (1791 - 1871) was an English mathematician, mechanical engineer, inventor and philosopher. Babbage was born into a rich family with his father in banking, which afforded him the opportunity to receive the greatest education possible in his time and made him part of London's aristocracy and intelligentsia during the beginning of the nineteenth century. Between 1828 and 1839 Babbage held the position of Lucasian professor of mathematics at Cambridge, which was the position held also by Newton.

Charles Babbage made important contributions to many fields as astronomy, cryptography and mathematics. He also played an essential role in starting London's Astronomical and Statistical Societies and curiously enough invented the pilot (the metal frame attached to the front of locomotives that cleared the tracks of obstacles). But his most intriguing achievements were in the field of designing computational devices. In 1824 Babbage won the Gold Medal of the Royal Astronomical Society "for his invention of an engine for calculating mathematical and astronomical tables, but he didn't stop there. Mechanical computing was his biggest passion and he constantly came up with ideas for new devices some of which he also managed to build in full or in part. Still most of his inventions were never built due to him always moving to a new projects and funding issues. 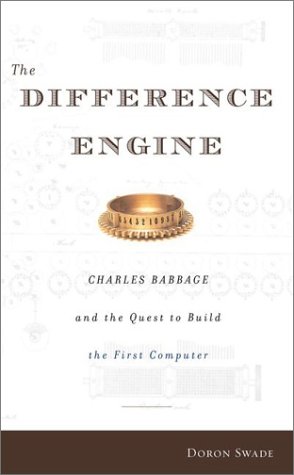 The Difference Engine: Charles Babbage and the Quest to Build the First Computer
Buy Now

The machines that Babbage did manage to build proved that mechanical computation was possible. Interestingly enough, the way his steam-powered computers operated or were meant to operate was very similar to the way modern computers work. They had a control unit much like the modern day CPUs that could not only calculate, but also perform conditional jumps, they had separate program and data memory, operated using instructions coming in punch cards like the early 20th century computers and had a separate I/O unit. Based on this we can safely say that Babbage's designs were at least 100 years ahead of this time.

His first big project was the Difference Engine which was meant to calculate numerical tables instead of humans, but despite having sufficient funding, the prototype was never completed. The machine was going to wight around 15 tons and be 8 feet (2.4 meters) high. Later on he created an improved version of his design, which came to be known as the Difference Engine Number Two, which was actually built in 1991 by the London Science Museum using his plans and nineteenth century manufacturing tolerances.

But Charles Babbage's biggest achievement was his Analytical Machine. It was a much more complex mechanical computer, whose design he was improving and expanding until his death in 1871. The Analytical Machine was designed to run programs coming through punch cards which allowed to operator to supply the control unit with operational instructions to execute in a way similar to the way modern day processors execute programing code. The Analytical Machine was actually the first computing device to be designed to be Turing-complete, decades before Turing would even formulating his theories. Besides a control unit, the machine was supposed to have a program memory unit that would store values needed by the control unit in order to complete the instructions and an array of output device designs like a printer and a plotter and even a bell to alert the operator for malfunctions. Of course, building such a machine based on mechanics, making use of rotating cogs and a steam engine would mean that it would actually be quite big.

In 2011 a group of British researchers initiated a project to build Babbage's Analytical Machine, which is supposed to be ready before 2020.