I recently purchased an Alfa AWUS036NH long range high gain wifi adapter to boost my internet connection speed. I live in a remote area and there are no telephone lines, and so I am dependant on mobile wifi provided by a telecommunications mast situated about a mile from my home.

The signal is not great, so I hoped that by buying a wifi signal booster adapter with a long range would be sufficient to increase my internet connection speed to somewhere to somewhere nearer to what I am actually paying for each month.

I chose the Alfa AWUS035NH model, because it has the strongest power output at 2000mW which is a massive 2 watts of power. This wifi adapter is advertised as being the most powerful on the market today, with the longest reach available.

I also like the fact that it has a RP-SMA connector should you wish to add a long range wifi external antenna to further boost the signal.

All the Alfa 802.11 wifi adapters are B, G and N compatible, which gives you a wider range of networking capabilities. 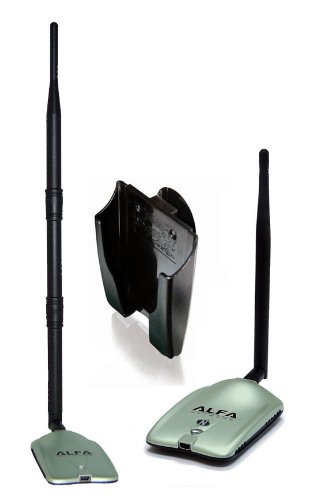 It duly arrived in the post from Amazon, and I opened up the packaging and made sure everything was there.

There was the wifi adaptor itself which is light as a feather and smaller than a pack of cards.

Also bundled with it was the USB cable to connect it to the laptop, in my case, but of course it is designed to fit any computer with an available USB port.

They also included two on board antennas, one a 4" 5dBi screw-on swivel rubber antenna, and a separate 7dBi multi-directional flat panel antenna for even greater reception.

I connected the adapter to the computer, and was still faffling about with the packaging for the mini-driver disk when Windows 7 found the device driver and automatically installed it.

However, I installed the disk too which was mainly instructions on how to set it up in XP which is totally useless for anyone on a newer OS, as the networking look and interface has changed so much since then.

There is a software program that comes with the Alfa AWUS036NH high gain adapter, but it is is not especially user friendly or intuitive to someone like me, brand new to networking.

I spent part of the day looking up search engines to find out what WMM or WPS and things are, but am still none the wiser.

What I did manage to do was connect the device to my own internet connection and I can certainly say I saw a huge difference right away.

My signal strength was always good because my mini mobile wifi router sits right next to me, but my download speed showed a 50% increase which is phenomenal.

My Windows wireless connection interface always showed one of two of my neighbors' internet connections but with 1 bar. Now they showed 2 or 3.

I unscrewed the stick antenna and screwed in the more powerful flat antenna, and took my laptop to the window where the wifi adaptop and antenna could see the village closest to me, about a mile away.

Suddenly the screen filled up with networks, most of which were encryted, but one or two of which were open. However, the signal strength was not great.

I then took the laptop outside and pointed the antenna is the other direction, and suddenly there was not just one or two neighbors' networks showing, but dozens, and all at 4 or 5 bars, which would mean an excellent connection speed if I knew their encryption codes, which I don't, and don't intend to try finding out. 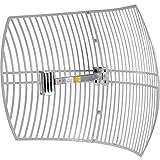 My Review of the Alfa AWUS036NH Wifi Adapter

What I would like to do next is to buy an external wall-mounted parabolic wifi antenna, which with some lengths of cabling can be connected to my Alfa AWUS036NH adapter, which will not only bring me a perfect reception for the Town Hall's free wifi, but could possibly increase my own connection speed up to the 3G that I pay for.

Overall, I am delighted with this high gain wifi adaptor which really does what it says on the box. I would strongly advise anyone with internet connection problems to look at this superb device to solve their signal problems.