During the 1980's entrepreneur Alan Sugar made a foray into the home computer market with the 'CPC' range of 8-bit micro's. But did Sugar sweeten the 8-bit pot?

These machines were produced during the 1980's and early 1990's, with the 'CPC' moniker an abbreviation for 'Colour Personal Computer'. It was possible to purchase an Amstrad machine with a green screen monitor (GT64/65) as a cheaper option; the standard colour screen monitor (CTM640/644) was obviously more expensive.

The Amstrad CPC 464 was introduced in 1984, and was designed to be a direct competitor to the Commodore 64 and not the ZX Spectrum, as Amstrad had taken over production of those machines from Sinclair. It also indirectly rivalled other 8-Bit players such as the Oric 1, Oric Atmos and the Acorn Electron.

Packaged as 'a complete system' the CPC 464 came with its own monitor and built-in cassette tape deck. Like the C64 it sported a sizeable 64KB of RAM.

So let's have a look at an 8-bit machine that managed to find space in a market already dominated by the ZX Spectrum, Commodore 64 and BBC Micro.

Overview of the Amstrad CPC 464

The Amstrad CPC 464 did become a popular machine in the UK, but never managed to break into the upper echelons of brilliance that the ZX Spectrum and Commodore 64 occupied. To be fair no other 8-Bit machine ever did.

In popularity stakes was on a par with the BBC Micro, and was easily seen as a better choice for buyers than the likes of the Acorn Electron, Dragon 32, and the Vic 20.

Still, with it's responsive keyboard, built in 'Datacorder' tape deck, a 'large' 64KB of RAM and sound provided by the AY sound chip, it was a formidable entry into the ranks of the 8-Bit generation.

The fact that the machine came with it's own monitor was quite special at the time. Owners felt a certain degree of coolness when compared to those that were using a bog standard portable television, especially those with enough cash to buy a model with a colour screen.

The picture was nice and sharp and of course you had no need to fiddle around with channels and tuning; picture setup was extremely easy. 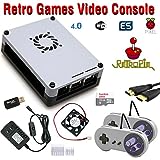 A large number of programs and peripherals were developed for the machine such as Amstrad's Operating System name AmsDos.

AmsDos was completely embedded in the Basic using RSX commands which again offered something over most other 8-bit machines of the era.

Strangely the operating system could not be used to format disks, you actually needed a special application to perform that simple task. The 464 could also use CP/M 2.2 or 3.0 when used with an external Floppy disk unit (3" Hitachi, 180 KB / face). A lot of great CP/M software was adapted for the Amstrad computer.

The snappily sounding Locomotive BASIC installed in the machine was decent, and ran at a reasonable speed. It was generally considered to be faster than other versions of BASIC out there at the time.

Roughly 42 Kilobytes of RAM was available to the user, and the video memory and the ROM were mapped on the same addresses with a dedicated chip to switch the memory banks automatically.

It was capable of producing decent graphics, but could not quite match the sprites of the C64 or the detail seen in ZX Spectrum games.

Still, with 27 available colours and the video output generated by the Motorola 6845 (which was connected to a pixel generator that supported 4 bpp*, 2 bpp* and 1 bpp* output), very good in-game graphics could be produced by talented developers and artists.

Three built-in display resolutions were available, though increased screen size could be achieved by reprogramming the 6845.

The screen modes were:

A magazine advert for the Amstrad CPC 464

Harrier Attack on the Amstrad CPC 464

Roland on the Ropes on the Amstrad CPC 464

The Amstrad CPC 464 as a games machine

The first Amstrad CPC prototype was named 'Arnold', which gave rise to the name ROLAND (An Arnold acronym) to several CPC classic games, such as Roland On The Ropes.

It was built around a 6502 processor before being changed to a Z80 unit later on in the computer’s development.

Plenty of games were released for the machine with most of the classic games like Manic Miner, Harrier Attack, Jet Set Willy, Commando, Elite and so on appearing on the machine. It was a popular choice for the home user right up until around 1990.

Plenty of arcade games were converted to the Amstrad too. During the 1980's there would generally be a version of most games for the Spectrum, C64 and Amstrad machines.

Visually, the machine itself was a nice looking unit. The colour of the keyboard and monitor went together nicely, and the keyboard had that 1980's colour scheme to it including red and green within the grey. It had the right look overall; eye-catching, fun, yet still attaining an air of professionalism.

Like all other 8-bit machines, the CPC 464 eventually succumbed to the 16-bit machines in the late 1980's when the Atari ST and Commodore Amiga reigned supreme. It is still a piece of hardware that left a prominent mark in early to middle part of the decade. A very fine machine.

Commando on the Amstrad CPC 464

The Ever Playable Bruce Lee On The Amstrad CPC 464

Plenty of arcade games were converted to the CPC 464.

All of the usual titles were in there and the CPC was graced with nice conversions of those coin-eaters such as Outrun, Bombjack, Operation Thunderbolt, Space Harrier, Gauntlet and Golden Axe.

Golden Axe on the Amstrad CPC 464

Space Harrier on the Amstrad CPC 464

Gaming on the CPC today...

Games are still being created for this machine today.

Chronosoft are a well known supporter of many retro machines, and the Amstrad CPC 464 is one of them. Chronosoft titles are always worth a look; for example cast your eyes over Baloonacy for the Amstrad.

Their site is a must if you are in the mood for a 'modern' experience on your CPC.

Modern Game Baloonacy On The CPC 464

A brochure for the Amstrad CPC 464 computer