Asus RT-AC87U: Should you buy this wireless AC router?

As with my previous reviews on technical products, I would like to make my review of the latest Asus RT-AC87U 802.11AC wireless router as simple as possible and with as little technical jargon where possible here.

This review is especially for those out there who would just like to get a robust wireless router so that they can enjoy the features and functions like a smooth 4K/UHD video playback, ultra-fast uploading and downloading of large files, low-latency online gaming and other entertainment pursuits without actually going into deep technical aspects of a networking product like the wireless router.

Where necessary in order not to lose perspective, I will try to explain the technical aspects first...and also try to keep that as simple as possible!

If you want to know more about the basics of the wireless router first, then I highly recommend you read my hub on How to buy the best home wireless routers before you continue here.

In fact this ultra high performance router is the fastest 802.11AC consumer class router that you can get at the time of writing.

For those of you who have been checking out this router, you will notice that there are two models i.e. the Asus RT-AC87U and the Asus RT-AC87R. So, what is the difference between the two?

Practically there are none as both of the are exactly the same in everything; design, internals etc except for the "R" and "U" and maybe box design!

Here are some technology to know first to help you make your decision...

To understand the benefits of beamforming, let me explain how wireless routers without beamforming features work first.

One easy way to understand it is to visualize a light bulb without a lampshade. When you switch on the electricity, light will radiate equally outwards from the bulb.

Likewise for today's many wireless routers, access points and wireless adapters without the beamforming function, they broadcasts data radially and equally in all directions just like the light bulb.

For beamforming with the light bulb analogy, imagine now putting a lamp shade over the bulb. This will first reduce the unnecessary light that radiates from the bulb.

Then make holes at the appropriate places of the lamp shade where you want concentrated light beams to shine on the your target places.

Beamforming devices works in a similar fashion. They focus their signals toward each client instead of just radiating evenly out. In that way, they concentrate the data transmission so that more data reaches the targeted client device.

What happens with beamforming technology is that it is able to hardness, gather and use as much signal from the router as possible without wastage just like our light bulb with holes in the lamp shade

If your Wi-Fi client also supports beamforming, you will get an additional advantage. This is because your router and client can communicate to exchange information about their respective locations for optimal signal path.

Yes...I mentioned Wave 2 products above. So before we proceed, let me share with you what these waves are all about.

As far as 802.11 AC products, there are currently two waves; often referred to as Wave 1 and Wave 2.

They generally received that qualification around the July to December 2013 period after passing Wi-Fi Alliance tests. In simple terms, you can think of the Wave 1 products as the first generation 802.11 AC products.

They usually also include a combination of the 802.11n standard in the 2.4 GHz band for backward-compatibility with older products.

Moving to the 5 GHz bandwidth allows the 802.11 ac products to access a bigger space with the clients consuming less airtime as they are about three times faster.

With the dynamic channel width feature, even though the 802.11 ac products starts with a primary channel assignment, they are able to expand and contract channel widths on each transmission. Thus, sending larger frames faster by borrowing otherwise idle airtime from adjacent channels.

The Wave 2 product was first introduced to the public at the International CES 2014 by Quantenna. The 4x4 QSR1000 was the first Wave 2 11ac chipset to be released.

What is the main benefit of the Wave 2 product, particularly the QSR1000 that is used in the Asus RT-AC87U?

It is the MU-MIMO or Multi User-Multiple Input Multiple Output enhancements.

This is because with MU-MIMO, there is a possibility of doubling or even quadrupling WLAN user density by increasing the number of simultaneously supported clients.

This is achieved through the use of up to 8x8 antennas to transmit and receive streams. It also allows conversing with clients that support between one and four streams.

MU-MIMO leverage beamforming technology to not only serve one user better but also provide the same kind of service to simultaneous multiple users at the same time.

As an example, your Wave 2 AP can communicate with two 4x4 notebooks on the same channel and with four single-stream smartphones simultaneously.

You can get the technical specs of the Asus RT-AC87U from the Asus official site, so I will not list them here.

However here is a quickie on the Asus RT-AC87U.

As mentioned earlier in this hub, at the time of writing, the Asus RT-AC87U is the world’s first AC2400 class dual-band 802.11ac wireless router that has a four-transmit, four-receive (4×4) antenna configuration.

In fact it is the first wireless router in the world to use a 4x4 multi-user MIMO or MU-MIMO technology.

Its beamforming feature known as the Asus AiRadar has an adaptive Quality-of-Service (QoS). I will explain more on this on the next section.

It incorporated Trend Micro's network security functions with a triple-strength total network security known as AiProtection. Robust parental controls and privacy protection are a part of the tfeature.

As for coverage, its wireless signal can cover up to 465 m² or around 5,000ft² without any walls or other obstacles blocking it.

It is capable of up to 10-times faster data transfers to USB storage devices, printer sharing, and 3G/4G dongle support with its built-in USB 2.0 and USB 3.0 ports. You can use the USB 3.0 port in front for a connection to some kind of a permanent storage device for it to act as a NAS server.

It comes with four Gigabit LAN ports and one Gigabit internet WAN port. With a hefty 128MB of flash memory and 256MB of DDR3 system memory it has enough power as a small server and it has one of the most powerful home router specs that you can get in the market today.

While the Asus RT-AC87U is very fast and it supports all existing Wi-Fi clients on the market regardless of their Wi-Fi standards, you will need a corresponding quad-stream-enabled clients to make full use of the quad-stream speed.

The big unfortunate thing right now is that there aren't any on the market. Fortunately the good news is that some are expected to be available by early next year.

Apart from that, the Asus RT-AC87U comes with a new Adaptive QoS (quality of service) which is only available in this model.

What the Adaptive QoS does is that it prioritizes the Internet bandwidth according to the type of traffic: web surfing, gaming, video and audio streaming, VoIP/Instant Messaging, file transfer and other functions.

The Asus RT-AC87U's QoS feature can automatically recognize the type of client that is connected to the router and prioritize network traffic accordingly.

For example, a gaming console or a VoIP device, will automatically be assigned a higher priority than a PC’s Torrent session.

You can also decide on your own priorities by using your mouse to rearrange those categories and the RT-AC87U will automatically handle the rest.

Should you get or not get the Asus RT-AC87U?

Without a shadow of doubt, the Asus AC2400 RT-AC87U Dual-band Wireless Gigabit Router is an excellent wireless router - in fact one of the fastest and best that you can get in the market today.

However my main concern is the price. Right now it is retailing around $265 to $270. It you look at the dollar value alone, it is expensive. This is because right now, you cannot take advantage of many of its great and industry leading features.

For example, you will need quad speed clients which will not be available until sometime next year. You will also need corresponding 802.11 ac clients to hardness the speed.

For those of you who are thinking of upgrading, if you already have an 802.11 ac wireless router right now and is not having any problems, I would highly recommend that you keep it first; unless you are an early adopter. This is because you would not be able to make use of the many of its bells and whistles right now.

Then the cost is actually cheap as you will be able to enjoy whatever that you can get right now and tap on to the potential that is in the Asus RT-AC87U as client devices becomes available over time.

Not only that, you don't have to worry about reading reviews and evaluations for getting another wireless router but just enjoy what the RT-AC87U can provide you. That itself is well worth the money you pay for it now.

Does the Asus RT-AC87U WiFi router meets your requirements?

Get the Asus RT-AC87 Wireless Router

ASUS RT-AC87U AC2400 Dual Band Gigabit WiFi Router, Aiprotection Lifetime Security by Trend Micro, Adaptive Qos, Parental Control
If you are looking at a wireless router that is easy to setup, fast, has a long range and many bells and whistles; future proofing your investment, then this is the router to go for.
Buy Now

Ok. Assuming that you have decided that the Asus RT-AC87U WiFi router is the right router for you, there are still two pieces of "source" that you need in order to enjoy the experience with your Asus RT-AC87U wireless router.

Then you might want to consider the RT-AC68U which is about $70-80 cheaper than the AC87U: 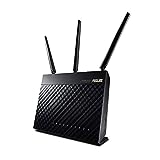 ASUS AC1900 WiFi Gaming Router (RT-AC68U) - Dual Band Gigabit Wireless Internet Router, Gaming & Streaming, AiMesh Compatible, Included Lifetime Internet Security, Adaptive QoS, Parental Control
The proven Asus RT-AC68U gives you speeds of up to 1900 Mbps with 1300Mbps over 5G and 600Mbps over 2.4G. Its Broadcom TurboQAM technology helps to boost the wireless-N data rate to 600 Mbps for 33% faster performance. This is a very solid alternative worth considering if you choose not to go for the RT-AC87U now.
Buy Now

Other wireless router and networking information

If this hub is helpful to you, why not share it? Use the social media button on the left edge to share