Automation: How the Conveyor Belt Has Changed Our Lives

A conveyor belt at a grocery store What is a Conveyor Belt?

Simply defined, a conveyor belt is a system that allows the movement of an object from one point to another without a manual transport of said object. A simple conveyor belt consists of two pulleys with a loop of material-the conveyor belt that rotates continuously around them.

How a conveyor belt works:

As an example of a manually functioning conveyor belt think of a flag on a flagpole: the flag is hoisted up to the top via the pulleys and brought back down in the same way. Now, if you add the continuous movement, through an automated system such as a motor, you have a conveyor belt, like what is used in a factory: parts move down a conveyor belt for inspection or packaging.

Why conveyor belts are important:

This very simple structure of pulley and looped material has enhanced the lives of laborers and corporations worldwide and its usefulness should not be underestimated. Time, energy, and health factors are three of the ways in which conveyor belts have improved the lives of man. Time, due to the speed in which objects can be moved; energy, because when machines are utilized man saves his individual energy; and health benefits due to the many ways that conveyor belts can enhance the safety of the employee. For instance, the ability to move heavy parts saves a person from physical strain or injury, or in the transferring of toxic chemicals from one area to another without having to handle them.

A brief time line of the development of the conveyor belt

Research indicates that references are made to the use of primitive conveyor belts dating back to the late 17th century. These mechanisms were made primarily of the natural material available, such as wood.

When the industrial age introduced mass production people manually moved objects from one person or place to another. When objects were too large or heavy for the average laborer to move pulley devices were utilized. Before automation hand cranks moved the first conveyors.

A conveyor belt system for farming has been around since at least the 18th century. The earliest publication referencing the use of a conveyor belt is in Oliver Evans’ Millers Guide, published in 1795, describing the mechanism of a simple grain belt. Between the dates of 1859 and 1863 Merrick & Sons, of Philadelphia, Pennsylvania, completed the Washington Avenue grain elevator.

At this same time, England was using conveyor belts primarily in abattoirs and bakeries. Records indicate that the British Navy employed this method to produce the ship’s biscuits in 1804.

Thomas Robins, an American inventor in the manufacturing field, developed a conveyor belt for the use of moving coal and ore in 1892. His innovative system won him the grand prize at the Paris Exposition in 1900. He went on to form his own conveying company five years later: Robins Conveyor Belt Company.

Early 1900’s-construction workers used a conveyor system to move shingles, and other building supplies, from the ground to areas of work.

In 1901, Sandvik, a Swedish engineering company founded in 1862 by Goran Frederick Goransson, invented and produced steel conveyor belts. This influenced a young, Irish born inventor, Richard Sutcliffe to utilize this concept for his field of work: mining.

1905 brought the invention of a conveyor belt system for coal mines by Richard Sutcliffe, a British mining engineer. This revolutionized the industry allowing the coal to be moved quickly and efficiently from shaft to truck.

In 1907 a German coffee company in Bremen utilized the conveyor belt system in its factory.

Hymle Goddard is credited with getting the first ‘roller conveyor’ patent in 1908.

In 1913 Henry Ford implemented the use of the conveyor belt in the assembly line, in his Highland Park, Michigan plant. It increased production and efficiency in the automobile manufacturing industry.

1957 came the paten by the B.F. Goodrich Co. for a high quality, longer lasting conveyor belt that had a half twist in it. This was advantageous because of the ability to expose more surfaces to wear and tear. The invention was called the Turnover Conveyor Belt System.

Not all conveyor belts are built the same. The most primitive system was built with wood rollers with leather or canvas covering it. As inventors began fine tuning their designs the introduction of a sophisticated system made of various material such as cotton, mesh or plastic. This is covered with a layer of rubber. Other conveyor belts are made of steel rods. The variety of belt material depends on the specific job it is designed to aid. All conveyor belts use a type of roller that the belt moves over.

Primitive conveyor belts were manually operated with the use of a hand crank, however, modern technology created electronic circuit boards and pneumatic systems to operate the system. In the 20th and 21st century many companies have implemented a digital control system.

Conveyor belt systems are built differently for weight bearing and flexibility needs. Some belts are a modular type, which allows them to curve. The improvement of belt quality has increased their durability and allowed longevity of wear and tear.

Here's a Poll for you to take:

Do you own an exercise conveyor belt?

Modern use of conveyor belts:

Many homes have a simple conveyor belt system that most people do not even realize: the exercise treadmill. This sophisticated piece of equipment incorporates the same methodology as other corporations-moving the product, the exerciser, from point A to point B.

The conveyor belt system is also used to transport people from one end of a long hall, such as in an airport, to the far end. We refer to this as a moving walkway.

Theme parks, such as Chocolate World, in Hershey, Pennsylvania, or Disneyland, (California), and Disney World, (Florida), use a method of moving people called the Carveyor system. Essentially, it is a large conveyor belt system with cubicles that allow people to sit in and move from one destination to another throughout the park grounds. 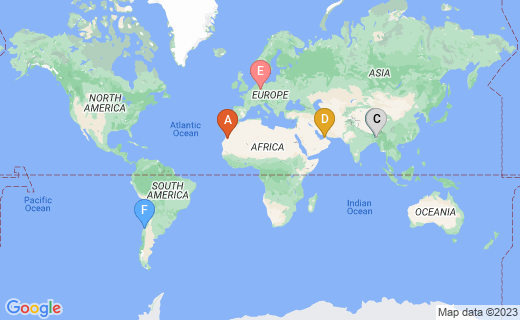 The longest conveyor belt in the world: 98 km

Limestone is mined and transported to a factory via the longest 'single belt' conveyor system.

The limestone from India is delivered to a cement factory here-10.5 miles of uninterrupted conveyor belt.

The strongest conveyor belt is used in the Los Pelanbres Mine.

The longest conveyor belt in the world today is located in the Western Sahara. It transports phosphate from the mines in Bu Craa to the coast near El-Aaiun. It is 98 km long, or almost 61 miles long.

The longest single-belt conveyor in the world was created to move limestone and shale from its quarry in Meghalaya, India, to the cement factory in Sylhet, Bangladesh. It is 17 km, or ten and a half miles long, and produces approximately 960 tons of limestone per hour. The conveyor stands 5 meters above ground across the distance to prevent floodwater damage during monsoon season.

The longest conveyor belt system is located in Dubai at the Dubai International Airport. Stretching to 92 km, (t consists of both belt and tray type conveyors).

The fastest conveyor belt is located at the lignite mines in Germany. They operate at an amazing 15 meters per second.

The strongest conveyor belt is one that is used in the Los Pelanbres mines in Chile. It consists of 78,740 feet, (approximately 15 miles long), of conveyor belt with strength of 48,500 piw. A piw is a measurement of strength that stands for pounds per inch per width.

Durometer scales measure the ‘hardness’ and ‘depth of indentation’ of a material, such as rubber. It was developed by Albert F. Shore in 1920. It measures a material’s resistance to permanent indentation.

The piw of a coil is determined by dividing the coil weight by its width.

The first moving walkway appeared at the World’s Columbian Exposition of 1893, in Chicago, Illinois.

How an airport baggage conveyor system inspired this author:

Watching the luggage move around the airport baggage conveyor belt brought to my mind the realization that this was something that we often take for granted. Before conveyor belts were developed and implemented into our modern day living, people had to transport the luggage from ticket office to airplane, and vice versa, via hand pulled carts. I became curious about all of the other conveyor belts that I see throughout my day, such as at the grocery store, and wondered how and when this little convenience was invented. This inspired me to investigate this subject and the research has been fascinating.

While each of these resources contributed to the making of this article, and all were very interesting because it was new information for me, the most fascinating resource I came across was through the scribd article. This was the information through the book written by Frederic V. Hetzel, and published in 1922. His diagrams and tables, along with his well organized and thorough information was amazing. If you would like to read in more detail information about conveyor belts and their history, be sure to check out this resource.

Here is a list of additional resources I’ve used to complete the information in this hub: