Are you looking for a highly rated digital camera that sells for under $500? It can certainly be a daunting task to find the right one when there are so many digital cameras selling for under $500 to choose from. To save you time and effort (and hopefully some money and frustration), you will find some of the best digital cameras for under $500 listed below along with some of their best features, per expert reviewers in the field of digital photography. Each digital camera featured below has its strengths and weaknesses; therefore, it is important to read everything about them to help you make an informed buying decision.

The Olympus Tough TG-2 iHS digital camera won PC Magazine’s Editors' Choice Award, so they obviously think very highly of this well built and rugged camera. The camera is waterproof to fifty feet under water, it has high ISO performance (ISO is the measurement of how sensitive a digital camera's image sensor is to light.), a fast adjusting lens (that can use filters and conversion lenses), and has generally good all around performance in different types of light. Some of its extra features that users find useful are Global Positioning System (GPS), digital compass, manometer (for elevation and water depth readings), and a decent sized Light Emitting Diode (LED) light.

The drawbacks associated with the Olympus Tough TG-2 iHS digital camera are pictures that could be sharper along the edges and the lens is noisy when adjusted and can be heard when used during taping a video using the camera. All in all, the Olympus Tough TG-2 iHS digital camera is a good value for the money. This is an excellent choice, if you are looking for a camera capable of taking multiple photographs at high speed.

The Canon PowerShot Elph 330 HS digital camera is considered by PC Magazine to be one of the best cameras one can purchase for under $250. It won PC Magazine Editors' Choice award for mid-range compact cameras. It has a sharp lens that takes excellent pictures, ten times zoom, Wi-Fi integration for easy photo sharing, high ISO performance, and quick pictures with little lag in shutter speed. I have always found Canon digital cameras to provide good value given the quality of photographs they provide and the features they contain.

The drawbacks associated with the Canon PowerShot Elph 330 HS camera include a small-aperture lens, a lack of full manual controls for those who want to make adjustment (but it is an under $250 camera after all), and limited 1080 video capabilities that capture video at twenty-four frames per second. 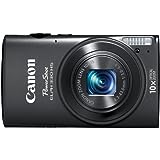 The Nikon Coolpix S9700 digital camera produces spectacular images, even at when the ISO setting is set high, it has a thirty times zoom lens that offers more zoom power than many cameras in its price range of under $350 cameras. Its zoom capabilities are so good that PC Magazine gave the camera its Editors' Choice award for compact super-zoom cameras. The camera’s strengths are a sharp lens that takes high quality pictures up to an ISO setting of 800, image filters built into the camera, an impressive 5.7 frames per second high speed photo burst capture capability, the aforementioned thirty times zoom capability, a crisp liquid crystal display (LCD), and built in GPS and Wi-Fi. The Nikon Coolpix S9700 camera includes mapping software that in conjunction with the GPS displays nearby landmarks on the camera’s view screen.

The drawbacks associated with the Nikon Coolpix S9700 are few. Testers found the Wi-Fi has somewhat limited capabilities, which will surely be improved in a later generation of the camera. The external device charger is not included and must be purchased separately, which is an additional cost that must be considered.

The Sony DSC-RX100/B digital camera delivers ultra-high definition images using its sharp lens and large 20.2 megapixel sensor, excellent low light performance, and a solid compact build that fits in a pants pocket. The large one-inch sensor allows the camera to deliver sharp images that have low image noise and a great amount of dynamic range. This makes the camera idea for low light photography. It has a fast ultra-bright f/1.8 aperture lens and a control ring that allows changes to aperture and other settings which expand a user’s ability to be creative with the camera.

The drawbacks associated with the Sony DSC-RX100/B digital camera are its relatively limited 3.6x optical zoom, video recording that is just average, which are disappointing given its higher price than many other digit cameras. If you live in a humid climate or like to visit one, this camera is known to have problems functioning in humid conditions and may not be the best choice.

Buy The Sony DSC-RX100/B From Amazon.com

Which of the Cameras Above Do You Think Is The Best Digital Camera?