Best Laptops For Video Editing in 2013

Editing Video on a Laptop

The trend to replace desktops by portable computers is well underway, but what if you use computer for something more demanding than writing and surfing the net, like video editing? How do you go about choosing a laptop that will handle your Adobe Premiere, MovieMaker or whatever software you use for editing movies.

Video editing is not a task that is best suited to laptops, which usually have less powerful components and less cooling power (which is need to keep the components from burning up), than traditional computers, not to mention screen real estate.

However, with the ongoing improvements in mobile components, especially the introduction of 3rd generation Ivy Bridge processors, laptops can increasingly handle complex applications with aplomb. It should not be too hard to find a laptop that can process your big movie files without burning up, and be truly portable, as opposed to the bulky desktop replacements.

Video files are huge. This is the challenge for computers handling them. The most important factors in being able to deal with these files is processing power, and RAM. Graphics cards are actually less important than for some other computer tasks, like playing games, but a dedicated graphics card is definitely an advantage. Below are some factors to consider when choosing your computer.

The processor is the "brain" of your computer and handles the calculations when running any program. Video editing is a CPU intensive task, so this is where a lot of the money for your computer should go into. The newest Intel processor types, the Ivy Bridge, produces less heat than past generations and comes in three flavours Core i3, i5 and i7. The most powerful i7 is obviously the best, but a quad core i5 processor will handle your applications just fine. I would avoid laptops with a Core i3 CPU, they will not have enough power to deal with videos.

Memory Handling the large files also requires a lot of RAM. 4GB is now pretty standard, and you should definitely not go below it, but 6 or 8 GB is better.

The Graphics Card Until recently didn't play much of a part in video applications, strange though that sounds. Think of it this way, you need a fast card to play computer games, but you can watch a movie on any laptop, even one without dedicated graphics. However, recently software packages like Adobe Premiere released new versions with an engine which made use of the processing power and memory inside the graphics card, so your program will run smoother if you have a card that the software can make use of.

Hard disk choice is rather trickier, on the one hand, the more storage the better which would suggest a standard SATA disk with big capacity. On the other hand, your computer will be reading from and writing to your disk when you're editing so an SSD drive, which is much faster than SATA will make the task go faster. However they usually come with very limited capacity, 128 or 256 GB. If you do go the SSD route, you should invest in an external disk for storing your movies. If you have a standard SATA disk, it is better if it revolves at 7200 rpm, then the 5400 rpm that is more standard in laptops.

The screen size should be at least 15", with 17" being preferable. To work comfortably and allow you to see what is going on with the file you're editing. You should pay attention to the screen resolution and make sure it is full HD (1920x1080). You don't want to be editing HD video on a a screen which can't display it!

The new model MacBook Pro appears to be the laptop of choice whatever your application as people fall under the spell of that gorgeous retina display. Mac computers are no longer a victory of style over function, this macbook comes with a top-of-the-range components including:

These components will definitely be sufficient to run any application you have in mind smoothly. The hard drive is a 256 GB SSD, although it ensures fast startup, application loading and writing temp files to disk, it will get full very quickly if you attempt to use it as your main storage. You really will need to get external storage.

The amazing thing, given the power of this laptop, is how portable it is. The MacBook Pro weighs 4.5 pounds, and at 0.71", it is not much thicker than a Macbook Air. If you need a laptop that you will carry around with you every day, that has the power to handle video editing, this is the one for you.

On the negative side, apart from not being a Windows computer, which is a deal breaker for some people, and an advantage for others, Apple have stopped making 17" MacBook Pros. The 15" screen is not small by any means, but many people prefer 17" laptops for serious work. Then there is the price! You can get the same powerful components for a cheaper price in Windows laptops.

If you really want an Apple product, or the portability is important for you, but can't afford the above, you can save some money if you are willing to do without the retina display, and some of the best components. For $1700 you can get a Core i7 Macbook pro with 4 GB RAM, a SATA disk and a 1440x900 screen.

Incidentally I wouldn't use a MacBook Air for video editing. Although I love my ultrabook, it really doesn't have the power to handle harder applications. Whenever I try to do any graphics rendering on it, it heats up horribly, and the loud fan noise becomes very annoying.

The Toshiba Qosmio laptop clearly demonstrates the point above, that you get a lot more bang for your buck with non-Apple computers. For 3/4 the cost of the retina pro you get:

With the exception of the screen, which is perfectly good, just not retina, and portability all of these components are as good, or better, than those in the MacBook pro.

This laptop will definitely handle all your video applications with ease, will play high-end PC games decently, and really do anything you ask of it. In my opinion it also looks very good. The only problem is that if you need to carry it around with you on a daily basis, 7.5 pounds is quite a lot. 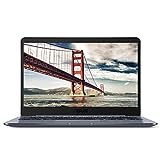 Gaming laptops make good video editing computers, they have the powerful high end components necessary. If anything their video cards, one of the more expensive components, might be too powerful for video editing software nowadays.

Asus makes the famous Republic of Gamers line of laptops, which are very reasonably priced for what they can do and are definitely worth considering.

For example, the model shown on the right has:

Again this is not a very portable machine, weighing 8.7 pounds and with a very short battery life.