Cob is also called "cobb" and in Welsh, "clom." It is an all-natural building material containing a mix of subsoil, water, and fibrous organic materials like straw. Sand or clay is sometimes added for strength.

Arcitecture of Stone vs Cob Techniques After reading for years about Native American and Mexican adobe houses and the construction of the Egyptian Pyramids, I realized that these were both examples of cob building. Checking at the time with historical records, modern investigative research, and personal contacts in both Egyptian archaeology and New Mexico history, this was confirmed in certain ares of each locale.

The same materials were used and are still used in parts of New Mexico. Specifically, bricks and blocks have been formed, and adobe has been molded over them small Native American communities called "pueblos."

Many examples of ancient cob building exist in England and have been brought to the United States by green businesses set up to build these structures and by eco-friendly individuals on their own.

Several people have written books about cob building and materials that you might check out of the library or find at your local book store or green building supply outlet:

I have looked at the materials of several house plans for cob building and examining the printed materials used in construction of a cob house in Knox County, Ohio.

I've come up with some foundation information about arches and, while what I have discovered may not fully meet your needs, I have supplied information for additional specific places to go for help.

I've also supplied several links to cob building sites that will answer email questions about cob related projects, and a couple of descriptions of some very good books that illustrate methods and give instructions in cob building.

It appears that the sturdy construction of cob, especially if straw is added into the mix of clay and sand, can support an arch over an arched window that is otherwise standard window size or even double the width of a standard window in today's construction of houses. In several pictures of completed cob homes, arches across doorways that span twice the width of standard house door also appeared strong.

You can set the window or door temporarily in place, and pretty simply mold the cob around it and let dry.

Several sets of plans and instructions I read suggested that the arch should be made more narrow in the center than on the ends, so that the weight the arch must bear can be somewhat reduced. No specific measurements were given.

None of the house plans indicated any means for determining the lengths of arches of any longer possible spans than a standard window, double window, door width, or double door width. However, since the cob-with-straw-mix is extremely strong when sun-baked, a longer arch span of this material may be possible. Based in standard engineering calculations, the base supporting the arch would need to be of a size, height, strength, and shape adequate to support the span of cob.

For longer cob arches, suspension bridge building engineering formulas would likely work, and your local university engineering and architecture departments would probably help you with these at no charge. Graduate students often do these sorts of projects and department professors check their work.

The Work of Freeman Yorde in America

In Knox County, Freeman Yorde built himself a small house out of cob and recycled wood (for framing). A house of 336 square feet, it is built on a foundation of 12-by-24 feet.

Mr. Yorde learned what he says is the art and architecture of cob construction in Portland, Oregon from Eric Hoel, who went on to Baltimore, Maryland to work with Habitat for Humanity.

Freeman helped Eric build a house of 750 sq. ft. (or "round feet", because the building's walls are curved) above a river in Salem, Oregon.

Freeman returned to Knox County in Central Ohio in September. 2002. There he found an interesting 10-day cob building workshop in southeastern Ohio at what he recalls to be named the Green Fire Ranch on SR 50 east of Athens.

Ianto Evans, who had taught Freeman and his friend Eric how to build with cob techniques, ran the workshop. Freeman continued to live in Gambier for the year, working as a house framer for a company that had employed his father as a construction manager.

The following summer (2003), Freeman spent in Vermont. He returned to Gambier during Autumn 2003 and contacted a student group on the Kenyon College campus named Resource and Energy Efficient Living (REEL).

With REEL support, Freeman wrote a successful proposal to Kenyon College to rebuild the tool shed, which had once been a goat barn. His proposal included earthen and reclaimed materials, such as old barn beams and timbers. These were excellent ideas for sustainability.

Professor Ray Heithaus of the Kenyon biology department oversaw the BFEC and was the impetus toward success. The leaders of REEL, Prof. Heithaus, and Freeman met with Kenyon's Buildings and Grounds Superintendent and his assistant to establish a possible stipend for the building.

Actually, $3,000 was dedicated to the building, half for construction tools and materials and half for Freeman Yorde. Interestingly, at the same time, a $60,000,000 Kenyon Athletic Facility construction project had already been ongoing for a year. Kenyon officials must have considered the cob project important as well. 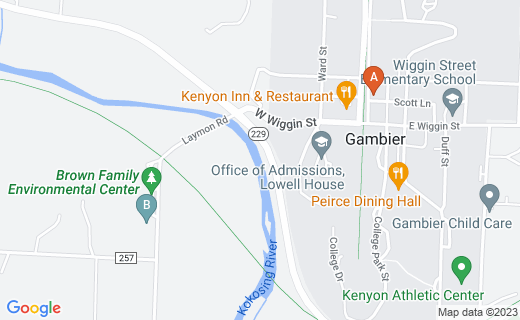 Construction on the cob tool shed in Knox County, Ohio began at the Brown Family Environmental Center (BFEC) at Kenyon College on March 31, 2004. Freeman Yorde graduated from that school in 1996 in Gambier, Ohio.

Construction on the cob shed lasted 3 building seasons, which adds up to 29 months from March, 2004 to October, 2006.

From the beginning, all work was accomplished by hand and foot, including digging, shoveling, hauling, mixing the cob, and building the wall. It took dedication and a lot of energy to complete the work.

Total cost of the building did not exceed $2,500 - excellent by construction standards. Over 200 sets of hands built the shed, using eight tons of clay, 12 tons of sand, hundreds of gallons of water, and 20 bales of straw to create earthen walls. No wonder it probably required centuries to build the pyramids of earthen bricks or stone in Egypt.

The doors to the shed were donated generously by friends. The transparent windows are from an old lake cabin in Northern Wisconsin and the stained glass windows were made by Freeman's sister-in-law in Chicago. The roof was donated by the company 64 Metals, Inc. in St. Louisville, Ohio.

Serendipity at the Tool Shed

Freeman Yorde met his future wife on this project. At the midpoint of the first building season (2004), the future Mrs. Yorde became Freeman's building partner.

The couple married in Columbus, Ohio at their church, Xenos Christian Fellowship, on May 29, 2010. In addition, Freeman reports that he came to know the Lord as a result of doing the tool shed project, becoming a Christian in Decemeber of 2004. He says that, "without God, this project never would have gotten finished."

This is all genuinely uplifting. Freeman Yorde learned sustainable building construction, met his future wife on a construction project, and found the Lord all in the same venue, whose main ingredient was the Earth used for contruction.

Life Lesson From the Shed

A meaningful quote from Freeman Yorde:

Machines are not the enemy ... and yet we cannot let what we do with our hands, the skill of our trade, be set aside to wither.

Cob Workshops in the Midwest

Cob revivalist Ianto Evans gave a series of Cob Workshops at the Ohio State University in 2004. Evans helped attendees to refresh current skills and to learn new ones as well. One lesson taught was that a properly constructed and molded cob house can last for over 100 years.