Flashlights for Dummies and Idiots

Yes I'm addicted to flashlights! As if being addicted to power tools wasn't bad enough, I can't pass a display in a store now without drooling over the display of torches and thinking "Hmm, that would be a nice addition to my collection!"

I have lost count but I reckon I have about 20 flashlights (or what I call torches) so I better tell you all about them before you get bored!

I have a small plastic torch which takes two C cells and I keep this in a backpack when I go hiking. It uses a conventional filament flashlight bulb. I'm trying to replace all my flashlights with LED types though. LEDs are the way of the future since they offer superior advantages such as long life and lower energy consumption.

Another torch uses 4 D cells and a filament bulb. This has a reflector at the back and so it produces a spotlight beam.

I have about 3 AA type Maglites. (D type version versions are also available). These are great because the aluminum body makes them sturdy and the o-ring seals keep them watertight. AA batteries are the most economical to buy, and rechargeable AAs are readily available. AA size Maglites are slim and convenient for keeping in a toolbox. You can buy an LED "upgrade" for them, but I don't know whether the light output is comparable to a incandescent bulb. However LEDs virtually last forever. I have a fiber optic accessory which attaches onto the front of the flashlight and the fiber optic cable can be poked into small hole to light up a space where the torch wouldn't be able to fit. I haven't had any reason to use this yet though! Another feature of Maglites is that the beam can be focused to a small, bright spot in the distance, a useful feature when installing plumbing, electrics, or working on appliances. Spare bulbs are relatively expensive for Maglites.

I bought a large flat solar powered triple LED torch which sits on a windowsill. This is always charged and ready for use so I don't have to worry about looking for batteries.

I have started buying lots of these small solar powered LED keyring type lights. These usually have 3 LEDs at the front and although they probably don't run for too long with the built in coin cell battery, they only cost a couple of dollars. I have one on the windowsill of nearly every room of the house and they could be used in an emergency or simply when looking for something in the dark recesses of a cupboard.Some people have all sorts of bulky ornaments on their house/car key ring. I just have a simple torch which has one LED and runs on a couple of button cells. This is great when looking for things at night in the dark.

I have a big long yellow "batton" type rechargeable flashlight with 30 LEDs. This lasts for ages on a charge and I can switch between having either 10 or 30 LEDs turned on. It has hooks for hanging it up, and a magnetic base so it can be stuck onto cladding on a shed for instance while working outside.

I built an electronic torch which runs on a 12 volt 7AH lead acid "gel" battery. The voltage is stepped up to 220 volts by an inverter in order to run a 20watt CFL. The car headlamp reflector at the back gives a great spread of light.

Modern bicycle lamps follow the trend and it is difficult to get a non-LED type. My mountain bike has a powerful removable LED light which can be used as a conventional flashlight. Powerful CREE LED types are available with output light levels of 150 lumen and more.

I've got two of these. One for DIY, and one for my bike if I have to fix a puncture in the dark in the middle of nowhere. Head torches are great because they free up your two hands, essential if your using tools and or working in dark, confined places. If you buy one of these, get one wit a shallow profile. Bulky head torches which stick out, tend to tip forwards from your forehead.

The collection wouldn't be complete without a small dynamo torch which can be charged by turning or pumping a handle. And I almost forgot about the torch sitting on top of the wardrobe which needs to be shaken in order to charge it. Neither of these require batteries, so are always ready for use. You can keep them in a jacket, in your car or when camping as a backup in case your batteries go flat (and the backup batteries are flat also!)

Yes I would like one of these. With a 1600 lumen output, these are really bright. In fact as bright as a 100 watt bulb or even a car headlamp! 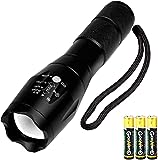 One of those flashlights which throws out a million candella beam would be nice. Or a camping lantern which is solar powered and can also run on batteries! However I must control my addiction and be content with what I have!

If you enjoyed this nonsense, please take the time tweet or pin it.
You may also be interested in some further reading on the options for home lighting in this article: