Do you remember the walkie-talkies that some people used to have? How awful they sounded, was that Darth Vader talking. Also the short distance that they offered or else they would not work. Then there was the fact that they were as heavy and big as one could possibly not imagine today. It was as if you were carrying a rock. Then there were the good parts of it as it sometimes worked fine, but it was just used to impress people about you having a walkie-talkie.

First of all, GMRS stands for General Mobile Radio Service. The predecessor of the GMRS was Class A Citizens Radio Service, which were introduced in the1960s. They functioned until the 1980s when the signals become congested in metropolitan areas. It then was renamed to its present name. The present GMRS two way radios are licensed land mobile walkie-talkies. These used the FM UHF radio service signals. That provides for short distance two way communications between the walkie-talkies. In order to use a GMRS two-way radio an adult has to have a valid GMRS license. That can be acquired for around 80 dollars which cover the licensee fee. The person’s immediate family members can also use the GMRS two way radios. 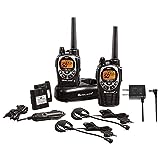 GMRS radios are used with narrow-band frequency modulation. A basic coverage that most radios offer is 20 miles. Some of the pricey ones can cover about 40 miles. Other models also cover the 40 miles but with some type of attachable antenna. Make sure to stay away from the cheap two way-radios as they don’t offer that much of coverage and are just a waist of time if you need them for an important task as they will most likely let you down.

The available channels that are out there depend on the users of GMRS two way radios. In some areas there are hardly any if at all, particularly in rural areas and now in metropolitan areas. Where there used to be the most in the early days of the radios. Way back when cellular phones didn’t exist. Now most people have cellular phones or landlines in their homes and businesses. Where one would expect to see a high usage of the available channels is outdoors in areas where hikers or people go to have an adventure that would require them to use a GMRS two way radio. But don’t despair as there are a lot of channels and most would be free to use.

The people that would use the GMRS two way radios are people that are on vacation. Particularly in an outdoors adventure such as hiking, mountain climbing, or other such activities that would require for them to be in constant communication with each other. It provides for them to keep everyone in the group safe and in check. Other uses include at a road trip or at a crowded place.

Some of the best tips when buying a GMRS two way radio is to never buy a cheap model if you absolutely need it for something important. If it’s being used for fun and playing around, then go on and buy the cheap one. It won’t offer a lot of features and a low coverage but it will still essentially work.

If it’s being used for an activity that would be necessary for the radio to work then buy a model that it’s priced appropriate or one from a brand that you trust. They offered most of the same qualities that every two way radios offer, but with different settings and options. Use your instinct and buy the one that will most likely offer the features needed for the occasion that it will be used.

The cons of the GMRS two way radios are that they aren’t practical to use. They are hard to learn to use. You have to learn the codes used to talk. There are times it won’t work, out of range. Require batteries which don’t last long. Then there is the fact that it’s difficult to see what the screen or buttons say in difficult situations or if you have problems seeing small objects.

The pros of the GMRS two way radios are that there is no monthly bill. No contract to sign. No passing over minutes. It’s also very convenient to carry around. Light weight and attractive to look at. The two way radio contains excellent reception and voice clarity when under channel overage.

Overall GMRS two way radios are excellent if for an occasional use with a neighbor without using the phone or if gong on vacation with the family. They offer great clarity and practical coverage that is enough for an occasional user. They are priced depending on the type of model other than that most are all basically the same. The pricey ones are most likely the most stylish and the ones that offer the most features that rarely are used. Just have fun using them and enjoy.