Matt has more than 20 years experience in IT, support, development, training, and digital art.

Going paperless has become a common mantra for people who quest to reduce clutter in their lives. There are even services that have you forward all your mail to them, they then open, scan, and forward each letter as a digital document to their customers. That is a bit extreme and expensive for my purposes, but there is a middle ground.

Until recently, I tried to keep up with documents using a flatbed scanner, Dropbox, and Evernote, but this resulted in piles of paper waiting for me to scan, as it takes a long time to scan, edit, combine, and save documents in the desired format. The idea with a simple sheet-feed scanner like the Doxie Go X2 is that it takes less time and therefore you are more likely to use it and avoid paper overtaking your desk.

Before considering the Doxie Go X2, I had looked at much more expensive alternatives like the Fujitsu ScanSnap S1500, which retails for around $400 and the more comparable and affordable Fujitsu ScanSnap S1300i ($250 Amazon). When I bought my Doxie Go a year ago it was normally $200 ($188 at Amazon), but I found a sale online for $150 and took the plunge! 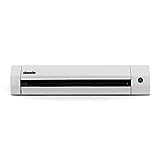 What you get with the Doxie Go X2

The Doxie Go X2 is a touted as a totally stand-alone scanner. That is somewhat true after the initial setup.

Realistically, you do need a computer in order to organize, group, combine, export, and perform OCR on documents using the Doxie software for Windows or OS X.

The unit contains a rechargeable battery, so you can scan on the road. This is potentially great for a business traveler or someone who works from different locations during the week.

It then saves the scanned documents in JPEG or other formats to an SD card or USB thumbdrive that you provide.

The process is relatively simple once the Doxie Go is charged.

To scan a document

After import you can then

Tips for using the Doxie Go

The good and the bad

The Doxie Go X2 is a good portable scanner for reducing paper clutter in your home or office. It is reasonably priced and very easy to use. I recommend this for most scanning, except for thick documents, irregular shaped documents, or photographs.

Doxie Go Plus from Amazon

I have had the Doxie Go x2 for a year now and I have to say, I like it even more than I did after I first began using it! The software has been updated a few times and is now more stable than a year ago.

The main thing (that is hard to say enough) is that it just makes it far easier to scan many small notes, documents, cards and such. It has been helpful to de-clutter my desk and drawers of miscellaneous notes on scraps of paper, receipts, and even scrapbook items.

Turn it on, scan the thing, dispose of the thing.

You can then organize and file the resulting images once or more often a week.

A program like Evernote is a great companion as well as Dropbox or other cloud sync services.