How To Save Energy Using A Smart Strip Power Strip

Saving Energy With A Smart Strip

My wife and I recently installed a three kilowatt solar panel system on our home. After living aboard our boat Rising Star, a small sailboat which was powered in part by solar panels, we felt that this was something we wanted to try on land. To make the most out of our new solar energy source, we wanted to extend the same care in using electricity and water to our land home as we had learned aboard our sailboat.

The three kilowatt solar system now provides most of the energy our home uses. What we do not use is fed back into the power grid, turning our meter backwards. It took a few sacrifices to be able to live mostly on power from the solar panels alone. Since we are still tied into the "grid" we can still use as much power as we want, but wanted to try and live off the amount of energy the panels produced, on the principle of being self sufficient.

After eliminating all of the large energy wasters, and switching to propane for cooking and clothes drying, we began to try and locate all of the phantom loads in our home. (For information on phantom loads see my article on Phantom Loads in the resources below.) Phantom loads are another name for standby power and refer to the energy consumed by devices when in their dormant state.

One way to get rid of these phantom loads is to use a simple, cheap, power strip with a switch. Unfortunately getting everyone around the house to turn it off instead of just turning the devices off was a problem.

We learned about Smart Switches from reading one of the eco websites. A smart strip is a power strip that senses when the main device, like the TV or PC is on, and turns on the outlets for the accessories or peripherals. Things like printers or DVD players don't need to be on when the main device is off.

Instead of having to go around turning on and off all the accessories you let the smart strip power strip do it for you. It works without any problems and also gives you surge protection.

A smart strip gives you the same amount of surge protection, 1275 Joules, as a regular surge protector, in addition to saving you energy.

After putting all the phantom loads on either a smart strip or a regular power strip we found that we were saving about two kilowatt hours a day. This add sup to about six dollars a month. In five months the smart strip will be paid for.

Now we use only about 450 kilowatt hours a month, thanks to energy saving or "Energy Star" rated appliances, a gas range and dryer, smart strips and compact fluorescents. In July and August we tend to go over our energy budget because of having to run the air conditioner, but we are working on that problem from a couple of angles. One is a geothermal or ground source heat pump, another is a whole house fan system.

Even if you are not trying to live on solar power, a smart strip is a good investment. It will pay for itself in only a few months and save you from having to go around turning off switches. 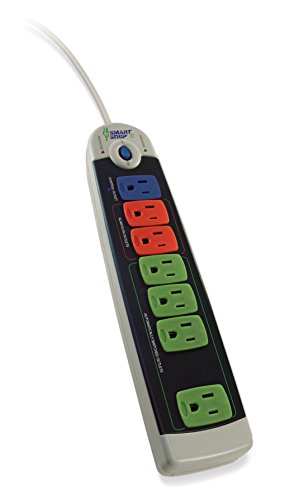 How To Eliminate Phantom Loads