Multi Monitor Mount - How to set up a Quad Monitor Stand

Sam works as a Network Analyst for an algorithmic trading firm. He obtained his Bachelors Degree in Information Technology from UMKC.

Using a quad monitor stand is a great way to increase your productivity. Having more screen space available allows you to view large amounts of data and work with multiple applications simultaneously. Multiple monitors can allow you to use your computer move effectively by taking advantage of all those cores your CPU has to offer.

You can also save a substantial amount of money by combining smaller monitors instead of using one large display. A single 30 inch monitor can easily cost anywhere from $1200 to $2000. Instead you can purchase four 20 inch monitors and join them to create a display that is less expensive and more versatile. Monitor stands also allow you to slightly curve the displays to create a more ergonomic viewing angle. If you spend a good part of your day staring at a computer monitor you want to reduce eye strain as much as possible.

Who can benefit from a multi-monitor display?

When choosing a monitor stand you want one that is strong, sturdy, and high quality. After all this stand is going to hold several hundred dollars worth of displays so you don't want one that might collapse.

In this hub we'll be taking a look at the DS100 quad mount but Ergotron offers a plethora of different multi-monitor stand and mount options. So if a quad stand isn't what you're looking for you might want to check out a dual, or triple monitor stand. 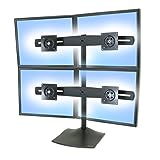 Before you purchase a monitor stand you should make sure your monitor has a compatible mounting system. Most monitors and stands use the VESA mounting standard. In order install a monitor on a different mount it must be removable from the factory stand. Remove your monitor from its stand and look for a pattern of four screw holes.

The typical spacing between the holes is 100mm, or 75mm. Compare the mounting holes to the specifications of the stand you are looking at purchasing to see if they match up. Most Ergotron stands include adapters that can be used for adapting most monitors to fit their stand.

It you want your computer to run several monitors you also need to make sure you have enough ports on your video card to connect them. Most modern PC's have support for two video cards but some still only provide one video output. The good news is the monitors do not have to be connected to the same card. For example you could install two dual port video cards in your computer to connect four monitors.

If you plan on connecting more than four displays you might considering using quad port video cards. These cards can support four monitors while only taking up a single PCIe slot in your machine.

You can mix video cards from different manufactures such as ATI and NVidia but it's best to use cards from the same company when possible. Sometimes using more than one driver will cause issues to occur.

Ergotron provides everything you need to assemble their monitor stands in the box so all you need is a flat working surface to work on. You may need a phillips screwdriver to remove the base from your monitors.

Step 1 - Secure the pole to the base

Step 2 - Place both arms on the pole

Place both of the arms on the pole and tighen the bolt to secure it. For now just estimate the approximate height the arms should be at.

Step 3 - Secure the brackets to the back of the monitors

Next go ahead and mount the bracket to the back of each monitor. I recommend using the enclosed thumbscrews, this will make things much easier.

Step 4 - Place the monitors on the arms

Before you place the monitors on the stand go ahead and attach the power and video cables, its much easier to do while the monitors are off of the stand. Mount the bottom two monitors first so the stand remains stable, adjust the height of the arm as needed.

Configuring the Monitors in Windows

After connecting the monitors and starting your PC there are a couple of things to do.

If you added a new video card to your computer you need to install the drivers in order for it to function. While you can install them using the CD in the box I recommending download the newest version from the manufacturers website.

2. Arrange the monitors in the control panel

Finally you need to arrange the location of the displays using the control panel. To do this in Windows 7 right click on the desktop and select 'Screen Resolution', this will open the control panel in the screenshot below.

If you don't see all of your displays listed check the connections, make sure they are all turned on, then click the detect button.

If they still don't show up try rebooting your computer, if you installed a new driver it may require a reboot to take effect.

After using your quad monitor stand for a few weeks you will find it hard to use a computer with only one screen. You will also find that your web browsing habits change since you can now have several different applications within view at the same time. I usually keep my email on one screen so I can keep an eye out for new messages and run web browsers in the other screens.

If you like to play computer games you can have a lot of fun with your new creation. Most popular games are capable of running on multiple displays to provide you with an awesome gaming experience.

If you found this hub useful please take a moment to rate it or leave a comment below.