In the Market for Battery-Powered Trimmers Shop Comparatively

I Started Shaving at Age 12

the age (then) when boys reached that age when their facial hair had came in, and thin as it was, my dad gave me my first lesson about shaving. He was a stickler about sticking to details. I never really understood that at the time, but in years later, I find myself following his same advice when facing new obstacles or redoing another area of my life. And I can say now that it works.

When my first shaving lesson started, dad told me to watch what he did and do what he did exactly and that way I would not end-up with a bloody face with cuts that would sting as the warm water washed them. Dad took a few fingers worth of his shaving foam, Gillette, I think, (and I am not using that brand in a commercial way), and began what I described it as a master at work. In a few moments, dad was finished shaving and wiped his face with a small towel and I watched each segment of his shaving ritual, I thought, piece of cake.

Then I Stood in The

mirror with my right hand shaking due to my nerves, and looked at the amount of shaving cream that I had administered to my face. Dad laughed at me at this point. Not with me, and I couldn’t blame him. I slowly took my first swipe of the razor very carefully and felt that familiar male bravado that all makes possess and took another swipe or two and I was finished because my beard was not fully-grown.

As I looked into the mirror, I saw fear, horror, and stupidity. Blood dripped from the various cuts on my face. I thought about crying, but knowing what my dad would say, I stood there and washed my face with a small towel. Dad told me to wash my face with cold water. But be careful because cold water does stop a certain amount of bleeding, but warm water only washes the cut. I cupped my hands and took a big amount of cold water and splashed it onto my face . . .and started to scream, but nothing came out my mouth. I stood there and waited for my first shaving pain to stop. Honest to God, the pain stopped about a half-hour from that moment.

Then in My Adult Years

I kept using a sharp, two-edged razor and now using gel shaving lubricant, not cream. Since I came from the Old School, it was tough to start a new way of shaving, but with some patience, and yes, I did have a few “nicks,”not cuts now, I got along just fine with the shaving gel.

In latter 2000, I began to watch a Shaving Revolution taking place among American men, and yes, women too, because they had earned their honor badges and was looked at like men because if they did the work of a man, they should be paid like a man. Yeah!

The upheaval I am telling you about was a TV ad about a novel way to shave without any cream, gel, or razor. It was an electric razor that had so many sharp, rotating blades running 200 + miles per second and in a few minutes, my face was cleaner than a baby’s butt. Or at least the guy’s face in the commercial had a nice, clean face and he smiled right into the camera. His trademark remark was: “I liked this razor so much that I bought the company,” and you probably know the guy, but I dare not use his corporation name to allow HubPages to scold me. But the Electric Shaving Movement was on.

like a flock of hungry geese as I was not working hours on end for a local newspaper and shaving was not on my personal agenda to work toward success, but work hard enough to stay employed, and still, no matter what TV program that I watched, there was that same smiling man who bought some electric shaving company and when the Super Bowl rolled around, this guy must have logged about 20 or 30 spots at a half-million a piece, but he could afford it. Anyone who can buy a company is not on poverty.

The Electric Shaving Moment was fading fast, but women’s TV ads talking about their leg hair and how this one electric razor would let them “shave” while showering and would not feel any pain. No, there was no woman who bought any company, but still. I saw a lot of women’s legs being shaved on future TV ads and even those began to wane.

So here I was in 2005 and still struggling to shave each night before showering because I did not have time in the morning because I had to be into work a half-hour early to fire-up our computers, open our doors, and other business things. But the one night that I did get home early, I was watching the Tonight Show with Johnny Carson, and there was this ad about Men’s Battery-Charged Hair Trimmer and went by the name: CONAIR for men’s beard, neck, and back.

My eyes grew wide with excitement as the ad went on to show how easily a man (at that time, no offense to the pretty women) could shave on the go and not be late for work. The next thing I knew, I was shopping for this hair trimmer that worked on battery charges. I felt so much like a successful man. And with the trimmer being so slim like a No. 2 pencil, I was so afraid that I would lose it, but I didn’t. For the overall part, the CONAIR Men’s Trimmer worked fine, but the battery charging was slower as the shaving went on and I did not have that thick of a beard.

This trimmer only provided (around) 70 minutes of shaving and trimming time, so I had to work fast.

I needed to make a move and fast because I had threw all of my razors and shaving gel away just because I was so happy to have this electric hair trimmer. And the longer that I used this item, I noticed that the blades began to stick on my neck hair and at the base of my face where my hair was the thickest. Honestly, I grew tired of stopping and then cleaning the heads of the trimmer, so I thought, where can I buy a hair trimmer that is better than this one? 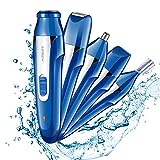 Nose Hair Trimmer - 5 in 1 USB Rechargeable Men's Trimmer Personal Waterproof Electric Shaver Razor/Sideburns/Eyebrow/Body Hair Shaiver/Nose Ear Hair Trimmer for Men Facial Grooming Kit (Blue)
Friends, look at why I own this trimmer: One of the features that sold me was the Dynamic Beard Guide Systems that lifts and trims lifts and brings up hairs for a better cut I love the super-sharp Zoom wheel that instantly-locks in to one of 17 lengths settings from some as precise as 1/64 inch (0.4mm) to 1/2 inch (13mm) I don’t have to worry about Trimmer shutting-off at mid-trim. This trimmer has a super lithium-ion battery giving me up to 70 minutes--1 hour charge
Buy Now

which cost me about the same as the CONAIR Men’s Hair Trimmer, but was so smooth when I was trimming my hair, beard, nose, ear, and neck hair that I could barely hear the little motor running. This is the feature that sold me on this trimmer.

Light-weight and very sturdy. I also loved the various guides that I could snap-on to achieve a certain length of hair in my beard, which was not that long, but it was great to have the guides in case that I did.

The battery-charging lasted for more than an hour and a half—plenty of time to shave, trim, and get ready to head to work. As for the oil that came with the trimmer, I only used a drop for every six-weeks and of work that I used it. What was amazing was at the end of the six-weeks, the Dynamic Hair Trimmer was going strong and trimming like new.

Now you can understand why I took some time to shop and compare the various markets of Men’s Hair Shaving and Trimmers that works with a battery charge. I am still happy with this trimmer.