Motorola Surfboard SB6141 vs Motorola SBG6580 - which is the better buy and what is the difference between the two?

If you have these same questions, then you have come to the right place.

However before you proceed, just take a good look at the image on your right. Can you spot the difference between the two?

It may be just a piece of cake for a geek but for many consumers out there including many of my friends, it can be very confusing to decide which of these two Motorola gadgets better suits them.

Hence, the question as to whether to buy the Arris Motorola SB6141 or Motorola SBG6580; or rather, which is a better buy is a very valid question for many people - even both devices are slightly different.

As such, I will try to explain in as simple as possible terms; trying to omit those technical terms and jargon so that you will have a good understanding of the difference between the Arris Motorola SBG6580 vs SB6141.

My intention is that by the time you reach the end of this hub you should be able to decide beyond a shadow of doubt which of these two devices from Motorola better suits your requirements.

By the way, don't worry if you see the name Arris appended to these surfboard devices as the Motorola division that manufactures these devices has been sold first to Google and then to the Arris Group.

I feel that this is a better arrangement as the Arris Group specializes in manufacturing telecommunication equipment for cable operators with high-speed data, video and telephony systems for homes as well as businesses.

As such you are in good hands if you buy either one of these gadgets as they are manufactured by the people who are specialized in the networking stuff rather than Google.

The basics first - What is a modem and what is a router?

You can skip this section if you are well versed with cable modems and wireless routers. However I will just include a simple and short explanation here for those who would like to know.

Even though I try to make this hub as non technical as possible, there will be some inevitable technical terms that you have to know in order to make the proper decision to select the Motorola Surfboard SBG6580 or SB6141 and DOCSIS is one of them.

Remember, both the Motorola SBG6580 and Motorola SB6141 are cable modems so DOCSIS is very vital here.

What is important for you to know now is that the current DOCSIS standard is at 3.0 and both the Motorola SBG6580 and SB6141 are DOCSIS 3.0 cable modems.

Another important fact is that DOCSIS 3.0 cable modems can be theoretically up to eight times faster than the older DOCSIS 2.0 cable modems.

If you are curious and want to find out more about DOCSIS, check out this hub where I wrote about the comparison between the Motorola SB6141 vs SB6121 which are two of the earliest cable modems implementing the DOCSIS 3.0 standard.

You can find out more about the history and the technical aspects of these numbers in Wikipedia but for now, both the Motorola SBG6580 and SB6141 are 802.11 "n" products.

What these alphabets tell you is the speed of the device and right now, the most popular among home users are the "n" devices with the "ac" expecting to gain more popularity in the coming future.

Gateway, what is it?

You have often heard about the term gateway. So what is it? A network gateway is an internetworking system capable of joining together two networks that use different base protocols.

In simple terms what it means is that when Motorola says that its Surfboard SBG6580 is a gateway, it allows the flow of data from the modem to your client devices through the build in router functions.

On the other hand, the Motorola SB6141 is not a gateway modem. What this means is that it is a pure modem without any router functions build in.

You will have to buy a separate router to use with your Motorola SB6141 if you want to connect to more than one client at the same time.

The main difference between Motorola SBG6580 and SB6141

So, now you have some of the technical terms out of the way, what is the main difference between the Motorola SBG6580 vs SB6141?

As I have mentioned previously, the main difference between the Motorola SB6141 and SBG6580 is the wireless router function.

For simplicity and clarity, here is a table showing you the similarities and differences between some of the more important features of the Motorola SBG6580 and the Motorola SB6141 at one glance.

OK. Now you have seen some of the major technology that goes into both of these Motorola networking devices. So which of these gadgets is a better buy, you may ask.

If you only need a cable modem (and want to have separate router)...

If you are not subscribing to a high bandwidth, then you may want to consider the Motorola SB6121 which is cheaper. Check out this link to find out more on the Motorola SB6141 vs SB6121 comparison.

The Motorola SB6121 is also very similar to the Motorola SB6141 except that it is only slightly slower. So unless you can fully utilize the bandwidth that you are subscribed to; quite frequently, the cheaper Motorola SB6121 will be sufficient for many people.

ARRIS SURFboard SB6121 4x4 DOCSIS 3.0 Cable Modem -Retail Packaging-Black
The Motorola SB6121 has become a "basic" cable modem since the Motorola SB6141 was released and the price at Amazon has dropped nearly half since it was first release. As mentioned above, if you are not subscribed to a high bandwidth now and possibly in the future, then this is a good modem to get. Otherwise I would highly recommend that you invest a few dollars more to get the Motorola SB6141 as that is a newer and faster model that will protect your investment for a long long time.
Buy Now

If you need both cable modem and wireless router in ONE box...

Buy the Motorola Surfboard SBG6580 if:

The other argument that I always hear against buying a combo is that if anything fails (i.e. either the router or modem fails), then the whole box fails. This is true.

However in the case of the two separate boxes, if either one fails, your network will still be down until you get the replacement! As such there is no difference when it comes to up time after a failure.

As such, these are personal preferences. No right, no wrong. So basically, the choice is up to you. As for me, I prefer the convenience of the combo.

Click on the link below to buy the Arris Motorola SBG6580 from Amazon. 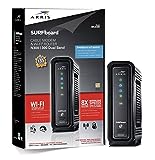 ARRIS SURFboard SBG6580 DOCSIS 3.0 Cable Modem/ Wi-Fi N300 2.4Ghz + N300 5GHz Dual Band Router - Retail Packaging Black (570763-006-00)
The Motorola SBG6580 lets you use only one wall socket but at the same time have nearly the same footprint at the Motorola SB6141 to help reduce the clutter. It also cheaper than buying both a cable modem and router together. This gateway device is good if you want to save money and have less clutter.
Buy Now

If you have taken the option to buy the Motorola SB6141 without the in build wireless router of the SBG6580 and you are interested to look at acquiring a separate wireless router, then check out the link below.

What if I need to connect a phone to my modem?

If you have been using a digital phone line with your existing cable modem and is looking to upgrade that modem then the above two modems i.e. the Motorola SB6141 and Motorola SBG6580 gateway we discussed here will not work for you.

You may also want to check out the Motorola's latest gateway which also incorporates MoCA.

What is your preference?

Are you currently using a digital phone line i.e. connecting your phone to your cable modem?

Was the information provided enough to help you make your decision?

If you find this information useful, please share it via the Social Media buttons on the left edge.

Tell us about your experience. We would love to hear your feedback...