Samsung to launch their own Smart Home Speaker

What is Galaxy Home?

All Tech Giants including Google, Apple, and even Amazon introduced their own Home speakers that provide voice assistance and also can perform different functions that were once done manually. With a voice assistant, you can say something like, "Show me how to make pizza" or "Order me Sushi" and it does just that. All you have to do is speak to it. The Galaxy Home is no exception.

How will it compete?

The only catch with Galaxy Home is that it uses Bixby. Which may not be as useful as other types of voice assistants. The reason being that Bixby is still new and may need some better updates and error fixes to make it more 'life-like'. Other voice assistants like Google Now and Siri have been around for years and is now developed to a point that they can perform literally most functions that you might want it to do. This can be unbeneficial for Samsung, especially because they decided to use Bixby. One thing that set things adrift is the decision to not include an AUX input. This is not usually common with Samsung.

Even though the voice assistant may be an issue. There are lots of other reasons why Galaxy Home may still be worth a try. Galaxy Home is designed to work better with Samsung's own line of smart home devices like smart refrigerators, smart TVs and even smart ovens. If we look at a house with all these Samsung devices, Galaxy Home will be just the right companion as it can communicate well with these devices. This is called the Smart Things concept. Galaxy Home can be used as a hub to control all these devices just by speaking.

Partnership with AKG and Spotify

Samsung has joined with AKG and Spotify to offer a better experience with the Galaxy Home. AKG is known for their high-quality audio devices and is commonly seen in other Samsung devices as well. The speakers of Galaxy Home is provided by AKG which ensures quality sound. Just like the Apple Home Pod uses iTunes, Samsung also chose Spotify as their music streaming device for the new Galaxy Home. This is a clever move since Spotify music library is said to be even larger than iTunes. These can be quite beneficial for users and may even be a selling point for Samsung.

Galaxy Home is said to be released in two versions the Galaxy Home being SM-V510 and a less expensive model which is SM-V310. The exact release dates are not yet confirmed but will be out in the months to come. Even though there are few drawbacks that make it less competitive, they will probably be solved before it's final launch. 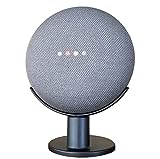