The newly released Samsung GALAXY Tablet hit the market with an instant bang! The Samsung GALAXY features a 1GHz processor, full Flash support (Android 2.2), dual cameras, up to 32GB of storage and WiFi and 3G connectivity.

The Samsung GALAXY Tab was provided to all four major US carriers. At&T, Sprint, T-Mobile, and Verizon. The makers announced the starting price at $599.00 USD (This price may, of course, change depending on what carrier you have. Refer to chart below for information.)

The major question on everybody's mind is: Can the Samsung GALAXY rival Apple's iPad and all the other Android Touchscreen Tablets on the market? The overwhelming majority was: "Yes!"

Of course, the ultimate decision is up to you.

With so many similar tablets out there, staring at all of them becomes a rather dull and indistinguishable process. Luckily, the guys at Samsung have some creative talent to match the wonderful software skills!

The new Samsung GALAXY Tablet has a saavy sleek white back made of plastic, and although it remains to be seen how long the white will stay white, the feature is an elegant and stylish twist to the traditional black-back world that the iPad stays true to.

The same can not be said for the front of the Samsung GALAXY however, which still remains in the classic black color, which, doesn't look bad of course, but isn't exactly something that is eye-catching if you decide to show it off. However, you can rest assured that you never have to strain your eyes to see small text online or zoom in x100 to see that picture of your friend. The Samsung GALAXY Tab features a 7.4 x 4.7 inch screen bursting with practicality for one handed use. (Compare to the Apple iPad which is a bulky 9.7 inches across.)

If you are a person who likes all that is slim, this gadget might not be the next best thing you come across. Although the gadget no paper thin sheet, it isn't a 3 inch phone book either. You determine what the perfect width is for you.

No tablet would come this far without at least, some basic useful features. Here's what the Samsung GALAXY Tab has to offer.

Software and Other Specifications 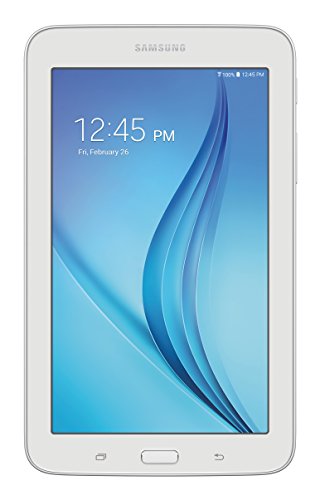 The first major problem the Samsung GALAXY tablet solved the second it hit the market, was giving users a choice and bringing competition to the market. Flashback to the thinking: "Hmmm, should I get the Apple iPad, or the Apple, iPad?" We're excluding the Dell Streak here because that tablet was a big miss for Dell (feel free to disagree).

If you've ever found yourself frustrated that everything is losing power and shutting down on you a mere 6 hours later, then your worries can (almost) fly out the window. This Android tablet was put through several rigorous tests by several users who were testing its capabilities out, and the majority of them claimed that the battery power lasted all day during moderate-frequent use. One user said it lasted an entire 2 days, although there were some moments of inactivity where the tablet was on standby. Of course, one needs to be careful because, since it is an Android, there must not be useless programs running in the background that can waste power and shorten battery life.

One of the biggest user-friendly features of the Samsung GALAXY has to be it's size. While some users have complained that it is a hassle to go through web navigation with the GALAXY Tab, they have also praised the device for being light, portable, and much easier to fit in a bag without hassle.

The main reason for the 7.4 inch screen on the Samsung GALAXY versus a much larger screen like the iPad is due to the fact that Android 2.2 software is simply not optimized for tablets yet. The tablets simply can't handle a shift to bigger resolution yet.

Will you be getting a Samsung Tablet

If you want to use the Samsung GALAXY Tab strictly for business related inquiries, then you might want to reconsider the iPad, due to its wider range of functions and bigger screen display. The prices are virtually the same.

If the Samsung GALAXY is strictly for personal use and entertainment, then go ahead and buy away! The Samsung GALAXY Tab is much more portable and lightweight than the Apple iPad, while still featuring a good overall user experience, and the bonus is the 2 cameras as opposed to the iPad, which has none.