Lynsey enjoys testing products and services and providing feedback and reviews on them.

When I decided that I needed a new iPod, It never occurred to me that I would need a better set of headphones too. I used to use sony in ear headphones, and while they were great with my old iPod, the volume limiter on the new iPod meant that they just weren't loud enough! I suppose I have learnt my lesson about buying an iPod classic without properly researching it- had I done so, I would have found out quickly that it is the only model to have a built in volume limit which can't be over-ridden.

Moving on, the damage was done, and I was quickly growing tired of being able to hear the whirring of the bus engine, or the screeching of the underground. No matter how loud I had the tune, I could still hear everything going on around me!

I spoke to a few people, and the general opinion was that bigger, over ear headphones were the best, because they could block out sound pollution, as well as deliver more volume. I was reluctant to accept this, as I thought the over ear varieties looked really silly, but after reading loads of online reviews of the in- ear varieties from loads of different manufacturers, I decided to give up on those.

I happened to stumble across the Skullcandy Uprock Headphones while shopping for CD's- I found them tucked in the clearance section for a bargain price of £5. The colour was perfect- hot pink, and so was the price! I decided that I had nothing to lose, and went ahead and bout them!

The Skullcandy Uprock Headphones feel as cheap as they were! I wouldn't leave them unattended near any children, or even think about packing them tightly in a bag- they simply don't feel sturdy.

In saying that, they are very lightweight, unlike other over ear headphones.

While I'm not going to destroy a pair for the purpose of testing the durability, I would hazard a guess that they wont last me hundreds of years, and will probably meet an untimely death if I ever sit on them.

The quality of sound is impeccable, and when I googled the specifications in relation to market leading headphones, I found that the Skullcandies definitely held their own! It's amazing to think of how clear the sound quality is out of such lightweight, plastic headphones.

While I'm sure my restricted iPod doesn't exactly help matters, I found that the sound was a bit lacking with certain songs- usually the Rock and Metal variety, while they performed particularly well when listening to Dance and Rap. As I'm more of a rocker, this should probably be more of an issue, but again, in relation to what i paid for them , I think they are performing very well! 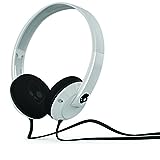 I decided to test the headphones in a few every day situations to see how well they compared to my last ones.

I put them on at night and listened to music while falling asleep. Unfortunately, this wasn't the most comfortable, as the bulky design meant that I couldn't lie on either side- which wasn't a problem with my in ear headphones. They did, however, seem to be particularly loud when the house was silent, so I didn't have to turn the volume up too high on my iPod.

I went on a bus journey using the Skullcandy headphones, and found it to be a much better experience than when using the in ear variety. While on the bus, a lady came on with a pram, and in the pram was a screaming baby.

This will sound sick, I'm sure, but it really isn't meant to be, and I really don't like seeing babies crying.

But- the view of that baby crying was awesome. Because I couldn't hear it. Not even a tiny residue of it. Score of 10/10 for being able to drown out surrounding noise!

This may have had something to do with my choice of music, but even so, I was absolutely delighted with the results.

I went to my local supermarket to pick up a few essentials. The headphones were great as they completely shut off the sound of generic music, crying children and conversations all around me, it was as though I was shopping in my own little bubble!

The old in ear headphones had to be turned up to max volume, and even then, the sound was polluted with the everyday sounds of shopping, so I was very happy with the results!

This had to be the deal-breaker of all tests- going a subway ride wearing the Skullcandy headphones.

I'll be honest in that I wasn't expecting to be able to drown out all of the subway noise- screechy and rumbly as it is. But, I was pleasantly surprised!

Unlike the in-ear headphones, the over ear variety totally covers your ear and shut out all of the noise, then blares music at you! Amazing! I was completely oblivious to everything going on around me, and simply had my tunes to keep me company.

I think it's safe to say I am now an over- ear convert!

When I began using the Skullcandy Uprock Headphones, I will admit I was quite self conscious and thought I looked a tad stupid. But, as the day progressed, I realised that over ear headphones are becoming more and more popular! Perhaps everyone is realising how good they are!

Aesthetically, these headphones tick all the boxes, and they're definitely able to suit everyone's individual taste. From reggae colours, to muted shades, to regular old black and white, you can get a pair of Uprock Headphones that suit you. And at the price, you can probably get a couple of pairs to match different coats or outfits!

I liked the feeling of these headphones on my ears, too. Strange point to make, I'm sure, but I personally don't like the leather covered variety, as they can be a bit squidgy. The foam covering is soft, comfortable and dry at all times, so I would recommend these for use in particularly hot days!

The sound was awesome, and I'm sure would have been better on the Rock and Metal songs if my iPod was not volume limited- this is definitely something I will look into in more depth- and if anyone has any suggestions on how to do this on the iPod Classic 120GB, please feel free to comment!

I would definitely recommend these Headphones as a reasonably priced, loud alternative to any in ear headphones.