How Do Solar Chargers Work and When Would You Use One?

Harnessing The Power of The Sun

Do you use solar chargers? Since the dawn of time man has worshipped the power of the sun and has been in awe of its power to light the planet and give heat to the Earth. Many of the early civilisations revered deities who were Sun gods; the Egyptians had Ra who sailed in his solar barque across the sky, the Greeks had Helios and Apollo, the Aztecs had Huitzilopochtli, and the Assyrians had Tammuz.

The sun gods were generally male and represented the energies of the daytime, of power, light and radiance, whereas female goddesses more generally were linked to lunar, nighttime energies of reflection, depth and feeling.

In modern times, we are able to view the sun in a more scientific, rational way, but are still painfully aware as to how important it’s light and power is to our everyday lives – if the sun didn’t rise one morning, life as we know it would soon end. So how can we harness the awesome power of the sun to our advantage in our everyday lives?

One of the ways that we can do this is by using solar energy for power, and this Hub is going to concentrate on solar chargers; how they work and when would you use them. 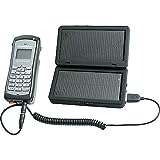 How many gadgets do you have that need chargers to power up the batteries? I bet most people have a phone, an ipod or mp3 player, a camera, a games console, an electric toothbrush and a laptop. In the ordinary course of things, you just stick the charger into an electric socket and let the gadget power up. But what do you do if you need to charge your gadgets and there is no electric socket to plug into? The answer could be a solar charger.

So how do they work? These gadgets have solar panels that when put into direct sunlight will convert the energy from the sun into electrical energy stored in your battery. The larger the solar panel, the more energy you get, and you can get solar panels that connect to each other to increase the amount of energy you are producing.

For a portable solar charger being used to juice up small devices, you can get one that has an internal battery. With an internal battery the sun’s energy gets stored in the device itself, and you can then charge your devices when you need to even if it is dark, or it is a stormy, cloudy day, and the device usually gets powered back up quite quickly. Some of them can get away with having only a 1 watt solar panel which is a cheaper option, and which would probably not be powerful enough to charge a device, but would work for the internal battery which would then in turn be powerful enough to charge your devices. On the downside, the internal battery will probably need to be replaced after a couple of years and is not environmentally friendly. You may also find that you have purchased a product that has a weak or faulty battery. 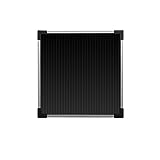 If you are just going to be lying on the beach and you want to keep your phone or ipod/mp3 player working, you can have a solar charger that plugs straight into the devices. Also, if you are in a very sunny region, you can work out how much power you need, and can probably get one with a large enough panel or connecting panels to keep most of your camp going! The downside of this is that no sun equals no phone or music. So you really need to work out what you want your solar charger for. However, this method is more reliable than using one with an internal battery, so for emergency and survival in the right conditions these are probably better.

The most likely scenario where you would not be able to plug something in to an electrical socket would be when you are on holiday; hiking or camping in the wilderness somewhere. So, one of the most important attributes of your solar charger is that it needs to be light and portable. After all you don’t want to have to haul another trailer or lug another outsize backpack just to keep your phone working, do you? Remember you could be charging your devices or batteries as you are walking.

Another important thing to note is that you ideally want one that is able to charge all your gadgets and appliances. It is very important that you check the product description to see if it will work with your devices. Quite often you may have to get the appropriate connecting cables separately or it may not work with your device at all. What is quite useful is if you get one that can also charge through the USB port of your computer, so that you can charge it up very quickly if you are near an electrical socket and there is no sun, and then use it to charge your devices later.

However, if you want to charge re-chargeable batteries, you would probably need a separate one designed especially for batteries. In addition, as you are likely to be using your solar powered charger outside, it is important that you choose one that has been weatherproofed. Also keep checking the connections when you are using your it to ensure that they have not become loose or clogged with dirt, and keep the solar panel itself clean and free from dust to optimise performance.

It is also important to note that the description of the output of these devices is based on optimum conditions of direct sunlight. If it is rated at 15 watts, then you generally get 1 amp per hour in direct sunlight. These conditions can be affected by the time of day, the time of year, the prevailing weather conditions or even whether or not the charger is behind a pane of glass. 10-12 watts is an average size for a solar panel, and bear in mind that the larger the solar panel, the more expensive the solar charger will be. So if you get one to use at home, bear in mind the average weather patterns of your locality, and how much use you are, in reality, likely to get out of your charger. Also, if are getting one purely to save electricity, how long would you have to use the it for before the saved electricity costs caught up with how much you paid for the device?

You might also want to consider getting a charge controller, as this will prevent your devices from over charging, helps to improve the quality of the charge and prevents accidental discharge from the charged battery.

As in all things, it pays to work out exactly what you need from your solar charger, how much you want to spend, and do lots of research and read reviews of the available products before you hand over your hard-earned cash.