Static has always been a problem in the chemical industry. It has been discovered to be the culprit of many industrial fires. In this article we will discuss briefly its workplace effects, explain and give a better understanding on what static is and how it behaves, then lastly provide preventive measures we can take to deal with static.

As a recap, you probably know the Fire Triangle and its three elements. To start a fire, you would need to meet the three criteria: fuel, air (i.e. oxygen), and heat (or source of ignition). In a chemical industry, say a storage tank farm, two of these elements are present. The chemical being stored (such as alcohols and chemical solvents) is fuel. Air is always present around us. That leaves only heat or source of ignition. Once the last element is met, you get fire or an explosion. Source of ignition can come from an employee smoking, lightning, or static.

The problem with static is that it is difficult to understand and control. It has been the object of many studies. What we do know about static electricity is that it is the spark created through motion between two different materials. In the chemical industry, this could arise from splashing. The motion allows the movement of electrons between the two materials which separates positive and negative charges which then accumulates on the surfaces (European Solvents Industry Group).

Static has a three-step mechanism. These are Generation, Accumulation, and Discharge.

Static electricity is produced by relative motion between materials or separation of materials.
This can arise in many ways such as Liquid Flow, Stirring, Mixing, and Dumping of Powder.

After generating static, it is accumulated and stays on the surface of the materials.

Static is then discharged from the surface of the material.

Different materials have different rates of discharge or dissipation. In the chemical industry, there are two things to consider when handing chemical solvents, conductivity and relaxation time. These two are related with each other. They are inversely proportional to each other. The higher the conductivity, the faster the rate of dissipation and thus, it will take a shorter time for static to be dissipated (i.e. lower relaxation time).

Relaxation time is defined as the time which takes charge to fall to 37% of its initial value when no charging process is active. It is primarily determined by the electrical conductivity of the liquid (European Solvents Industry Group).
After three relaxation times, only ~0.373-5% of initial charge remains (i.e. 37% of 37% of 37% is 5%)

With a high conductivity, charges can flow away readily and relaxation time is short.

Here is a chart of common chemical solvents and their conductivity and relaxation times.

Take note that polar substances such as alcohols and acetone have higher conductivity.

This is due to their polarity and shape of their molecules. But that’s another topic reserved for another day. Take note too that these substances have lower relaxation times, being only a fraction of a second. Nonpolar substances such as toluene have low conductivity and higher relaxation time. It takes for example 12 seconds for toluene to have little to no static charge. These chemicals are involved in a lot of fires arising from static.

What is the best preventive measure against static?

These are common controls for static electricity. Bonding is connecting two or more conductive objects with a conductor, such as a wire which equalises the charges between them. Note that bonding does not eliminate charge. (Static Electricity)

Grounding on the other hand, is linking materials directly to ground. The ground absorbs the charges being generated and thus, effectively eliminating charge.

Remember that grounding and bonding requires having conductive materials. That is the reason why chemical containers are made of steel as opposed to plastic. Plastic actually generates a lot of static. We have many instances in our warehouse where static caused ignition that we banned plastic containers altogether. Gasoline containers, the ones you find in petrol stations are made of plastics but they have an inner lining that prevents static charges from forming, or the liquid itself is added with antistatic
additives.

Humidity is another way of preventing static charges. I’m actually fortunate being in the Philippines as the climate is humid. This actually lessens risks of static from forming
as water vapour molecules in the air, which are polar and thus conductive, help in dissipating any charges being formed. However, this is the most unreliable method and is no guarantee against accumulation, so do not solely rely on humidification as control
measure.

Lastly, not a control measure, but I strongly recommend having an electrostatic meter around when working with flammable and nonconductive chemicals. This is to monitor static charges are below hazard levels. 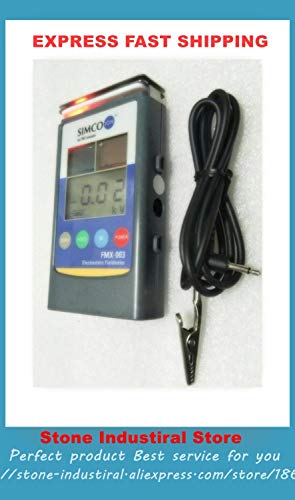 We have a Simco Electrostatic Meter device in our workplace which we use to determine if our grounding is working. It’s easy to use and I recommend this model.