Carbon Arc Past and Present

Guide to the Carbon Arc

This article will examine several topics concerning the carbon arc. Topis covered are as follows:

Properties of the Carbon Arc

When a current that is high amperage and low voltage is applied to two carbon electrodes and the two contacted to spark a carbon arc is stricken. The carbon electrodes are slowly pulled apart and the electric plasma will form and an arch if the electrodes are positioned in an angle. Strongly brilliant arc consist of charged particles and free radicals with a lot of light energy and it gives a tremendous amount of heat. Carbon arc is capable of reaching temperatures in excess of 3700°C. This makes the carbon our furnace very useful and can work with refractory materials that typically cannot be melted with conventional heating sources. Also, chemical synthesis which could not be done before are now attainable with the higher heat generated by the carbon arc. Some examples of the uses for a carbon arc furnace are as follows: smelting metals and alloys, high tempature reductions, and the manufacture of new refractory inorganic materials.

Discovery of The Carbon Arc

In the early 1800s a young, ethusiastic, and very talented Cornish chemist had access to the most powerful battery in the world for that time in the Royal Instittute. That chemist was Sir Humphrey Davy. Most renowned for isolation alkali and alkline earth elements by electrolysis, he also explored various methods of producing light. Initially, he picked a strand of platinum because of its high melting point. This however, did not produce a bright lumination and it did not last. Later, he found he could produce intense light by striking a high current arc with charcoal rods. Hence the carbon arc was born.

Early Applications of the Carbon Arc

The first application of the carbon arc was in lighting. More specifically, street lighting and lighting inside large buildings. This was the main source of electric lighting from about 1870 until the development of incandescent lights in the early 20th century. Once the incandescent lamps were in wide spread use, the carob arc still had some uses in very specialized applications. Movie projectors and search lights represent a couple of examples.

Around the turn of the 20th century, a scientist name Henri Moissan pioneered experimental work with the carbon arc furnace. He published much of his work in a small but very informative book titled " The Electric Furnace". In this publication he discusses the crystalization of materials thought impossible to melt like magnesium oxide, calcium oxide, as well as sulfides. The carbon arc furnace led to the discovery of calcium carbide which gives off acetylene gas when thrown into water. Other high temperature reductions are discussed such elemental silicon from silica sand, phosphates into phosphides or phosphorus, and the reduction of metal oxides to carbides or free metallic element.

You take the carbon arc furnace and remove the insulating refractory brick body, and add a conventient handle that allows adjustment of the carbon electrodes, you have a carbon arc torch. They were the tool used for the obsolete carbon arc welding process. Usually, the torch is just a handle with power leads that connect to a welding power supply.

Although, no carbon arc torch has been mass produced in many years, they have resurfaced in popularity due to the rising cost of acetylene and oxygen. Many DIY'ers have resorting building there own and posting their results online. Check out the videos below.

Demonstration of a Carbon Arc Torch

Since gas discharge lighting is so prominent currently, the light provided by the carbon arc is rather irrelevent to hobbyist. What would attract a hobbyist to the carbon arc is the intense heat created by the discharge arc. Often blogs, websites and youtube videos depict the carbon arc as being capable of melting anything. In fact with a 3500 Celsius flame temperature, this is practically true. For this reason, it can be a challenge finding suitable materials to build arc furnaces. This does not stop the intrepid spirit of the hobbyist, wielding a torch that melts the unmeltable is a temptress to behold. Most hobbyist are interested in melting metals with high melting points, making calcium carbide, or creating there own alloys.

Although an oxygen acetylene torch would be more practical in some instances, the carbon arc torch can heat metal up in a hurry. Often faster and thicker metal than a gas torch. Carbon arc torch heating metal must be approached with caution as it can be easy to destroy the metal completely by liquifying it. It is an art to be practiced to be mastered. It is advisable to try scrap metal first. Like heating with the carbon arc, brazing with this device is for larger pieces to thick to be practical with a typical gas torch. 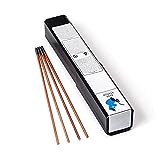 To generate a carbon arc of reasonable heat and intensity, you will need some carbon rods of at least a quarter inch in diameter and power supply with low voltage and high current. Ideally, the power supply will have current adjustment to help fine tune the heat output and be able to use carbons of different diameters. An AC or DC power source will suffice but DC being polar, will wear out one carbon faster than the other.

One of the most readily available and cost effective power sources for hobbyist is a stick welder. In fact a used Lincoln tombstone AC buzzbox can be had for $200 or so and is capable of 225 amps! There are also Inverter DC welders that are MUCH lighter in weight yet still put out well over 100 amps. It would be best to have a dedicated 220 outlet for the welders.

One industry that still needs carbon arcs is the metal recycling industrial. This is especially true of the steel scrap handling business. The furnaces are usually called EAF Electric furnaces. They consist of a huge crucible nearly as big as a house filled with scrap steel. A set of very large carbon rod are lowered into the crucible and an arc is stricken. This is the carbon arc on steroids. The carbon electrodes are a couple feet in diameter and they carries tens of thousands of amps and hundreds of volts! The sound of this furnace is beyond belief. Just check out the video below.