Just a few years ago, I found a local Kindergarten classroom equipped with computers for each of its 20 students.

The classroom teacher and two aides gave instructions and patiently sat with the children, who seemed to grasp the computer concepts and fly with them. Basics are more advanced than ever!

Today's high school students are often instructed to eschew multiplication table knowledge and access a handheld or online calculator instead. What if the electrical power is interrupted or no more batteries are available? That is a problem.

This accompanies the inability to make change in a retail transaction, since power outages kill the computerized registers and the ability to make transactions in retail and dining establishments. No one knows the "cigar box" method of sales from lemonade stand of yesteryear any longer.

During power interruption events in restaurants, one often hears a blurt of "We've lost cash control!", which means that the tills and receipts of the day cannot be reconciled, because there is are no longer any records -- Perfect day for a theft.

And how about those that cannot tell time without a digital readout? We hope our technology will always work.

The first widely accessible handheld computer was the Bowmar Brain, which sold for about $200 in the late 1960s. That was about 125 times the hourly minimum wage in the United States. Technological gadgets are great, but one must know how to use them or have the foundation knowledge necessary in order to figure them out. As children in a science lesson, we were given each a compass and asked to determine a direction in which a paper arrow on a desk top pointed. I'd never previously seen a compass and did not know what it was, nor how to use it.

Our teacher would not tell me what it was or how to use the compass, but the Boy Scouts in class had no problem and ignored those of us that had no compass experience.They though we were "stupid."

This is the experience I recalled at once upon hearing some years later that a Chicago area fast food chain was sued by the businessman father of a 16-year-old employee:

On her first day of this, her first job, she was thrust into the busy Drive-Thru window area that had only a computerized cash register. She could not work it, because she was without any training for any position. She was given the admonition, "Figure it out!"

She immediately left work, crying, and called her dad at his business office. The lawsuit resulted in enough funds to pay for her college education. Since that time,. most teenagers have quickly begun to use computers in the classroom and on their own. Many Calculators Are Helpful

If you look for the famous Bowmar Brain handheld calculator from the late 1960s-early 1970s on eBay, you'll find a handheld that looks like those available at Family Dollar for $1.00, except for the appearance.

The original BB sold for about $240 or more. Today, you can purchase a high-quality graphing calculator for much less for companies like Casio, HP, and Texas Instruments (TI).

Hewlett Packard then developed the HP-28C and several newer models up until today. The HP 50g developed in 2006 includes a computer algebra system that manipulates symbolic expressions and solves equations.

Texas Instruments has a long line of graphing calculators dating back to 1990.

In the 21st Century, a growing number of high schools in several countries are requiring students to own a graphing calculator, which they may even use on some exams. This may be fine, but in college when my calculator batteries died, I was still able to complete a graphing problem by hand, because I had practiced paper and pencil methods at length (because I never trusted batteries 100%).

How many of us can do these graphs without a calculator these days? I'm thinking the numbers are dwindling.

Some elementary schools are allowing students to use handheld calculators in classes, but your area may reserve calculators until middle school, usually 6th - 8th grades. The TI-73 Explorer is a good model and can be purchased new or used at decent prices. It is superior to the TI-15 which has an inadequate display.

Some schools receive grant funding to help defray the costs of these units, just as they have with laptops in years previously.

The next step up (to high school and college levels) in Texas Instruments calculators is the TI-83 or TI-84, but this Casio model is preferred by many students and teachers alike. 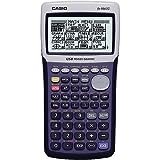 This is another good alternative to the TI-83 and TI-84.

While I like the TI-89 Titanium edition, it's likely too much power for a high school, even an Advanced Placement class; unless the student is sure to be using the device for a number of years and can master its functions.

The TI-84 Plus is a good range of models (various colors). It is authorized for use in America on the PSAT, SAT, and ACT exams, AP tests, and IB exams. The Voyage 200 is a larger handheld model of calculator, primarily for advanced high school STEM* classes, for college, and for engineering work.

It has a larger display than average, with a QWERTY keyboard that is not permitted in all test taking situations, especially standardized testing. Check with your school.