A few years ago, the only way to really record your own music was to hire a commercial recording studio, schlep all your gear in and watch as your hard earned cash drains away. Thanks to digital technology, those days are behind us. With a good, cheap USB audio interface, you can record studio quality music with nothing more than your personal computer.

I'm no cynic, and I'm not trashing on professional studios; they are definitely a great option for a professional quality sound. All I'm saying is that not everyone can afford a few weeks of studio time. With an inexpensive digital USB audio interface, you can produce your own music with very little capital investment.

Let's take a look at a few of the best options on the market today. While I don't suggest skimping, it's surprising how little is needed for a great studio quality interface. We will check out three of my favorites, and I'll explain why each of them is a killer deal. I'll also talk about the other stuff you'll need to get rolling (assuming you're starting from scratch). Let's begin!

Focusrite 2i2: An inexpensive and simple USB audio interface

The Focusrite 2i2 is a perfect example of a simple, powerful and easy to use interface with a lot of versatility and upside. Not only is it very cheap to buy, it's durable and results in a great sound quality.

One of the first things you'll notice about this one is the metal outer case, a mark of its durability and solid build. The anodized aluminum looks awesome in a modern studio setup or on your desktop.

There are two inputs on the front. You'll notice that they are dual type inputs, which allow for both standard 1/4 inch guitar cables and three pin XLR microphone cabling too.

This is a USB 2.0 audio interface, meaning it has faster transfer speed and thus better sound quality. There are nice features such as gain alert, which lights up a halo light around the gain knob for each input. When it's red, you should reduce the gain to reduce distortion and clipping. When it's green, the sound level is optimized.

This is a 24-bit interface, and it features 48v power so you can run both condenser and dynamic microphones (or any device requiring phantom power). It's compatible with all of the major studio software such as Cubase and ProTools too, as well as simpler programs such as Garageband.

It's definitely a great choice and one I'd recommend you look into.

This beautiful USB audio interface by Tascam is a fine example of where technology in this industry is headed. We're moving away from complex systems to a more unified approach with intuitive design, and I think it's great.

This is a great interface if you're wanting to do a bunch of multi-track audio recording, because it has the capability to record four tracks simultaneously, something that devices in this price range can rarely do. There are two standard XLR three pin microphone inputs, and two quarter inch cable inputs. Unlike some other devices, these are not combination ports.

Both XLR lines have 48v phantom power for running a condenser mic. You have the choice of standard RCA input and output, or you can opt for optical digital if you prefer. It's a USB 2.0 device as well.

There's a digital mixer included with the device, and you can choose between podcast and music mixing settings. It also includes a basic version of Cubase, though if you can do it I'd opt for fancier recording software (which the US-366 should be fully compatible with).

With a wider range of inputs and outputs than many of its contemporaries, this is a budget USB audio interface with a versatility many other can't match. I love the rugged construction, high quality sound (due to a great internal pre-amps), and wonderfully intuitive and tactile controls. It's high on my list. 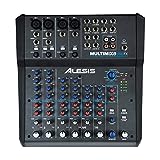 If you're a fan of devices that perform double duty, you'll love this little mixing board and digital audio interface. It's cheap, versatile and works well in both settings.

Right off the bat, I should mention that this board does NOT have 8 outputs. There are actually two (left and right), so if you're running multiple instruments you'll be limited to how much multi-tracking you can do. If you want to expand this, you'll need a different interface or a better sound card.

It's a 16-bit interface with full phantom power on the four mic inputs. It features a versatile EQ with three band equalization on the first four inputs and 2 band on the other four. It also includes other stuff you'll find on mixing boards such as a high pass filter.

It really shines in a few different ways. First it eliminates the need for a separate mixer: it's amazing how much simpler a build in soundboard makes your life. Secondly, it's great for recording an instrument that requires a lot of different inputs, such as a drum set.

It's durable, versatile, and sounds pretty great for the price point. And you can take it to your shows and it works great in a pinch with most PA systems or loudspeakers (though a full-fledged soundboard is better if your venue has one already).

Other Things To Consider:

Here are a few other considerations you should be aware of when looking for a digital USB audio interface. 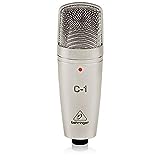 What do you need a budget digital audio interface for?

What Other Gear Do I Need?

Thanks for reading! If you have any questions or comments, please feel free to leave them below. I'll try to respond in a timely manner.

What do you think? Questions or comments?