A Classic of the Personal Aviation Era!

I took my very first flight in an old Stearman bi-plane when I was seven years old. According to my father, I loved it!

It was about 20 years later, at a small airport in a little town in central Florida, that I climbed into the left seat of an Ercoupe and took my first flying lesson. One trip around the pattern in 6133-Charlie and I was hooked.

My job took me from Orlando to Huntsville and on to Eglin Air Force base near Pensacola, about three times a month. By stretching my flight experience just a tad, I was able to convince my boss that it made great sense for the company to have me flying my own plane rather than Eastern Airlines.

It was later that I took the time to learn the history behind this insignificant flying machine that was know by many names, but also as the best civilian airplane ever built.

Fred Ernest Weick, who was born in 1999, graduated from the University of Illinois in 1922 and died in Vero Beach Florida at the age of 92, just two decades ago, is widely credited with being the father of the Ercoupe also know later and more broadly as the Aircoupe.

Although he prospered during the period of aviation giants such as Charles Lindbergh and Amelia Earhart, he never garnered the publicity and attention of the public eye. Nevertheless aviation experts and historians have credited Weick with "being in the league of the Wright brothers."

On the event of his passing, a NASA spokesman said that Weick's "genius touched virtually every aeronautical discipline and he arguably outstripped any of his peers" in American aviation development.

After college, he instantly applied his technical background and degree to the field of aeronautics and aviation. One of his earliest jobs was with US Air Mail service. While employed at the mail service he worked as an aircraft designer an engineer and an airmail pilot. It was largely due to his efforts in the early 1920s that the concept of emergency fields for mail pilots became a reality. This was hailed to be a critical step in postal air mail advancement.

In 1925, after the Mail Service stint, he joined the National Advisory Committee for Aeronautics (NACA), -- later to become NASA -- at the Langley Aeronautical Laboratory, in Hampton, Virginia. There, he served on the team that designed the first full sized, 20 foot diameter wind tunnel for propeller research. Later, he authored a textbook on the design of propellers that is still an industry standard today.

While at Langley Weick lead the engineering group responsible for the new generation of aerodynamically improved engine cowlings featuring low-drag technology that offered a significant improvement for engine cooling and advanced aircraft performance.

The NACA cowling made aircraft faster and more profitable which revolutionized civil air transportation during that period. It also served a critical function on the bombers and fighters as the U.S. entered World War II. In 1929 Weick received the prestigious Collier Trophy for his engineering breakthrough on the cowlings but to many of us, he will always be the father of the Aircoupe.

Over 5,000 aircraft were produced during the period between the end of WW-II and the start of the Korean War when production was halted. From the immediate post-war period, there was constant promotion of the airplane taking the place of the automobile as the major form of individual transportation of the 20th century. In 1945 thousands of the new airplane were sold by no less than the Men's Department of Macy's in New York.

After 1951, the Ercoupe design was sold to various smaller airplane manufacturers and was produced under several different names including: Fourney, Alon, and Mooney. In 1970 last Aircoupe came off the production line.

The Ercoupe, with its unique twin-tail design, was designed with integrated controls in that the rudder was connected to the yoke so that yaw correction was automatic. There were no rudder pedals. The nose wheel steering was connected directly to the yoke. Taxiing the airplane was no different than steering your car. Weick also built in a limitation on the elevator up travel which made the Ercoupe was aerodynamically incapable of spinning!" You can try, but the plane will actually fly out of an incipient spin. "Rudder Kits" were later produced to convert the plane from a 2-element integrated control system to a 3-element conventional control system.

Landing the integrated plane became the subject of conversation around the hangers. Crabbing into the wind was one of the standard landing procedures for conventional aircraft. The pilot always kicked in some opposite rudder just before touchdown to get the plane aligned with the runway.

With the Ercoupe, you held the crab into the wind and proceed to touchdown holding the crab. If you relaxed your hold on the yoke, the nose wheel straightened the plane out on the runway. Geometry and motion caused the Ercoupe to turn down the runway in the direction airplane was travelling. It was an unnatural mental task for many pilots to actually touchdown in a crab. .

I also know first-hand how difficult it was to transition from the integrated control airplane to the traditional rudder equipped airplane. It took me over a month to master crosswind landings when I later moved up to a Piper PA-28.

An interesting related story is the fact that all the first group of Boeing 707 pilots took landing lessons in the Ercoupe. The low-hanging jet-pods on the 707 meant the pilots couldn’t simply drop a wing on cross wind landings. The 707 pilots had to learn how to make crosswind landings with a crab; the only way you landed the Ercoupe unless you had the rudder conversiuon kit installed.

If you are interested in learning more about this classic airplane, Amazon has several books you would probably enjoy. 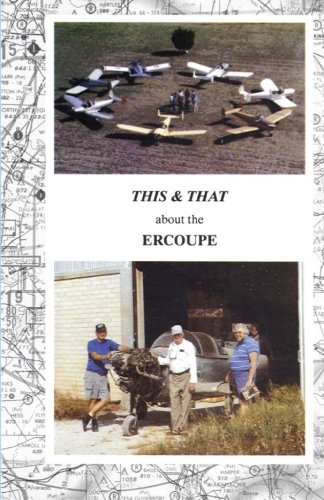 A Great adventure of 1500 miles in an Ercoupe