Understanding H.A.A.R.P. and it's Terrifying Power 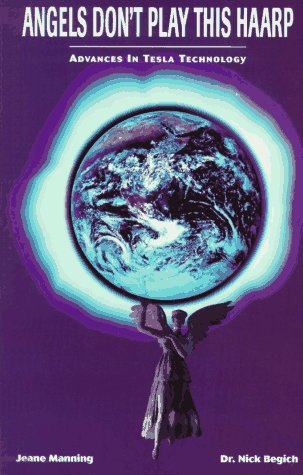 H.A.A.R.P. is an acronym that stands for High Frequency Active Auroral Research Program.

What does it do?

H.A.A.R.P. is a very secret military program. We actually know very little about it and what we do know is quite technical and difficult to understand. What I hope to do is to take a little of the mystery out of H.A.A.R.P. so that you will understand what our government is doing and how this technology could affect you.

The technology for H.A.A.R.P. was actually invented by Nicola Tesla about 100 years ago. H.A.A.R.P. works by sending radio waves into the ionosphere in order to move the jet stream and affect weather patterns. When these radio waves are directed into the earth they can cause earthquakes. One of the telltale signs that an earthquake or tsunami was caused by harp is that the sky will glow with a lavender hue right before it happens. This was seen in before the earthquake in Chili a few years ago. Also, the Russians have a H.A.A.R.P. that makes a noise like a woodpecker when it is activated. These radio waves are like sound waves. We are all familiar with the opera singer that hits the high note and shatters a glass. H.A.A.R.P. works in much the same way, the beams are projected either out into the atmosphere to move clouds or the jet stream causing rain in one area and/or a drought in another or down into the earth causing vibrations that can trigger an earthquake. Areas that already have fault zones are especially susceptible.

Isn't This Just Another Conspiracy Theory?

For those out there who think that this is nothing but a conspiracy theory and that the government does not have the technology to affect the weather I would like to point out to you that we already have treaties in place that specifically address this issue as well as the official H.A.A.R.P. Website. You can also visit the facilities in Alaska but good luck getting past the gatekeepers!

A weather warfare treaty, originating in the United Nations, was signed in 1977 specifically prohibiting the use of weather modifying technology. It says in article 1 of the treaty that each state party undertakes NOT to engage in military or any other hostile use of ENVIRONMENTAL MODIFICATION techniques having widespread, long-lasting or severe effects as the means of destruction, damage or injury to any other State Party. The treaty further defines the term “environmental modification techniques” to mean any technique for changing, through the deliberate manipulation of natural processes, the dynamics, composition or structure of the Earth, including its biota, lithosphere, hydrosphere and atmosphere, or of outer space.

My question is how would we know? How would we know if H.A.A.R.P. or any other weather modification system is being used? We wouldn't. There are no committees overseeing this technology, most people don't even know that it exists. Furthermore, the people who do know about it are not talking! Even though millions of dollars of our tax money is going to support this, we, the people have no knowledge of it, nor are we given access to the information. This technology is completely anonymous! That is what makes it so dangerous. If H.A.A.R.P. was/is used for nefarious purposes there is absolutely NO WAY to know. Just imagine a weapon that can decimate a population without firing one shot and can do it anonymously!

What's that about Mind Control?

Furthermore, not only does H.A.A.R.P. affect the weather, cause earthquakes and knock-out electronic communications which could be devastating alone but it also can affect people directly. H.A.A.R.P. can cause people to think that they are hearing voices, affect their moods and it can also render aggressive populations harmless. We are talking about total population control here! Rumor has it that H.A.A.R.P. has been used on Muslim prisoners of war in order to cause them to reveal secrets that they would otherwise have taken to the grave. This was done by deceiving the prisoner into thinking that Mohammad had appeared to him and gave the prisoner permission to reveal secrets. Also, in the video below, Brooks Agnew tells of using H.A.A.R.P. technology to cause aggressive populations in the Iraq War to surrender unconditionally. No more protesters, no more pesky Tea Party, no more civil disobedience..just compliant, zombies in place of informed, active citizens.

Moreover, H.A.A.R.P. works by heating up the ionosphere. When this occurs it causes holes in the ionosphere allowing harmful radiation from the sun onto the earth. What can result from this is anyone's guess but I'm sure it wont be good. The Bible predicts that the sun will scorch men with fire, could this be a direct result of H.A.A.R.P.?

Rev 16:8 And the fourth angel poured out his vial upon the sun; and power was given unto him to scorch men with fire. Rev 16:9 And men were scorched with great heat, and blasphemed the name of God, which hath power over these plagues: and they repented not to give him glory.

The only protection that I can offer is called a Faraday Cage. A Faraday Cage is made out of any metal and encloses an object completely, thus causing the beams to surround the cage while keeping objects inside from being affected. A video is provided below which demonstrates how a Faraday Cage works. This is a method that will protect your electronics from getting zapped in an solar flare or H.A.A.R.P. occurrence. But as far as I know Faraday Cages will not protect humans.

This technology is the most dangerous technology that we know about. Full disclosure must be provided to the American people but I doubt it will. If there ever was a time to get right with God, the time is now. We have absolutely no control over this technology and are completely vulnerable to it's ill effects. God help us.