Trisha Paytas has some songs, music videos, dance videos, and makeup tutorials on youtube, but let's face it, no one watches Trisha Paytas for any of those reasons.

This is an article about why people love Trisha Paytas.

I have to admit that I love watching Trisha Paytas and seeing what she's going to do with her make-up today. I remember once seeing her with "pink eye" make-up where she put pink eye shadow on one eye and kept the other one bare. It sounds stupid, but it looked good and I thought it was creative. I like looking at her outfits and her various weaves. She can pull off both blonde and silver hair. She's entertaining just to look at.

Mostly she talks about body positivity for "curvy girls", but if you watch all her videos, she believes people of all sizes should feel good about themselves. A lot of people on social media and youtube mock her for her weight, but that doesn't stop her from making entire videos dedicated to twenty minutes of watching her eat a large meal.

#3 She Doesn't Hide Her Flaws

One thing that's really awesome about her is the fact that she doesn't hide her flaws. Despite the fact that she loves make-up and looking beautiful, she posts a lot of videos of herself without make-up (acne visible) and without her hair weave. Most people on youtube or television would feel ashamed for anyone to see them like this, but she doesn't care. She lets us see the real her, flaws and all. It shows that she's a real human being.

When Trisha Paytas starts talking about her political or religious views, she usually winds up offending everyone. She's made videos about how sex before marriage is wrong, but at the same time has slept with different men before marriage. She has homosexual best friends, but sometimes supports candidates that hate homosexuals. Sometimes her reasons for supporting political candidates are silly as well, like that they are physically attractive.

She lost a lot of subscriptions over her video supporting Donald Trump for president. Unfortunately, the video has been taken down from everywhere online, so all I could find are reaction videos to it.

It's not just political and religious views she discusses. She also talks about other taboo things like necrophilia.

#5 She Talks About Her Interesting And Sometimes Racy Life Stories

Trisha Paytas has worked a variety of interesting jobs, everything from being an escort to a stripper to a struggling actress to someone who dressed up like Supergirl. While working these jobs, she's met many celebrities and has even been on a few television shows and music videos herself. Because of this, she's met and even dated/slept with celebrities. So she has some very, very interesting life stories that she shares in a lot of her videos.

I don't mean this as harshly as a lot of people do. She's very vulnerable on youtube. Instead of hiding her tears and struggles like most people do, she blares them all over the internet. It gets her in trouble a lot. Sometimes it causes a lot of drama. It's kind of like a reality show at times, but it's entertaining and I feel like makes her more of a real person than all those people on facebook who only post pictures of their family happy and smiling. She posts both the good and the bad.

#7 She Views Her Fans As Friends

It's not the healthiest thing in the world to feel more comfortable posting about your emotions online than you do talking about them to people you know in real life. But the fact that Trisha Paytas always opens up on youtube makes all her fans feel like they are one of her best friends. She often refers to us as her friends as well.

#8 She's Not Afraid Of People Hating Her

She's very confident. She gets hate comments all the time, but you very rarely see her getting upset over any of them. I think it's pretty cool how she finds validation in herself and doesn't need other people's approval to be happy.

#9 She Says The Craziest Things

This is a video compilation of a lot of the crazy things Trisha Paytas has said and it makes me laugh. I don't agree with a lot of the things she says, especially some of her political opinions, but watching her speak is entertaining nonetheless. You never know what she's going to say or the reasons she will give about why she's saying it.

#10 She Does The Craziest Things

Every Trisha Paytas video ends with her saying "Hi to Rick Moranis," This is because she is obsessed with marrying him someday. I never thought I would meet a person who thought Rich Moranis is the sexiest man alive, but Trisha Paytas is that person. It's to the point where she's posted several videos of her proclaiming her love in a variety of ways just in case he happens to see them someday. I can't tell how serious she is in any of this videos or not, but I don't think in the end that it truly matters. It's hilarious to see her dress up in a ghost busters costume and recite bad poetry to Rick Moranis.

Trisha Paytas is known for sometimes posting fake stuff to get attention and more views. She's admitted to this in her own videos. The interesting thing about it, though, is it's really hard to tell what's real and what's an exaggeration. 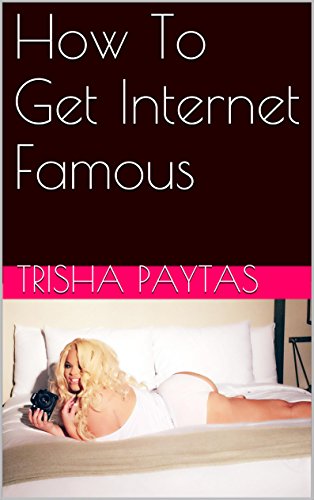 How To Get Internet Famous
Buy Now