The machine is born...

Released by Sinclair Research Ltd in 1981 (the same year as the 'friendly' VIC 20), the machine was named after it's year of release.

Just like the ZX80, it became a popular home machine all around the UK and also ended up indirectly competing with another 8-bit monochrome machine; the Jupiter Ace.

The machine was notable for it's sleek looks, membrane keyboard and, despite having the capability of any colour or sound capabilities, a large library of games.

So let's look back at a pioneering machine that really kick-started the home computer boom in the UK and led the way for the likes of the ZX Spectrum also from Sinclair... 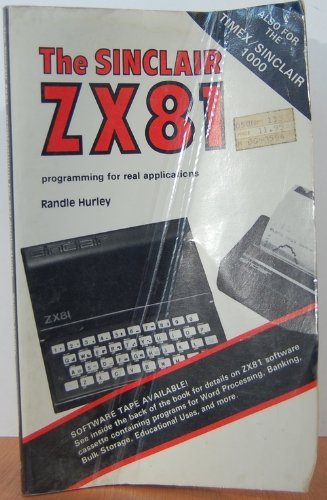 Just like the ZX80 the processor that drove the unit was an NEC Zilog Z80-compatible, running at a clock rate of 3.25 MHz.

The system ROM was 8192 bytes in size, and the built in BASIC now supported floating point arithmetic. It was an adaptation of the older ZX80 ROM by Steve Vickers, who was one of the clever folk behind Sinclair BASIC. The new ROM also worked in the ZX80 (How's that for backwards compatibility?) and Sinclair offered it as an upgrade to the ZX80 machine for a time.

It has to be said that the ZX81 was quite a basic piece of kit. The base system had only 1KB of RAM on board (that's right, 1K!). The RAM was used to hold the system variables, the screen image, plus any programs and data.

Blocky graphics could be created by using the PLOT command and a resolution of 64 by 48 pixels were possible.

The ZX81 used a resizable screen buffer meaning that it could be expanded or shrunk (this depended on the amount of memory installed and the amount of free space at any given time). The machine was monochrome only and had no sound capabilities at all - so we're talking shades of grey in total silence.

The 'keyboard' as such was not a proper typewriter keyboard. Sinclair opted for the membrane flat keypad similar to the ZX80.

It did look quite cool though.

Monochrome graphics on the ZX81

Once again the ZX81 was originally sold via mail order in kit form to buyers. This meant that the unit requiried soldering to put it all together - and appealed to those hobbysists that loved to pick apart hardware.

The USA was treated to a similar deal on pricing, with a ready made ZX81 costing roughly $100.

High street retailer W.H.Smith eventually sold the ZX81 and all it's accessories allowing the machine to be more readily available to shoppers.

Architecture of the ZX81 and peripherals

Apart from having more BASIC commands than the ZX80, the machine also had two modes of operation. Fast mode and slow mode.

Slow mode made it display like all other home computers of the era as in it refreshed the display all of the time.

The ZX81 reallly was a simple affair. For instance it only contained four main chips which were: The ROM, Z80A CPU, 1KB RAM and the Ferranti custom-made chip.

Despite the machine being simple in nature, a large range of peripherals was developed for it such as: 3.5" floppy disk units, proper typewriter style keyboards, high resolution graphic cards, RS232 interfaces, RAM expansions and more...

In fact, it was possible to make a pretty powerful computer (at the time) by upgrading the ZX81 with a load of add-ons.

It was possible to have additional memory (up to a HUGE 128KB of RAM!), high resolution graphics, disc controllers, joystick controllers, serial ports etc etc.

As you may guess a popular add-on was a replacement keyboard. Proper mechanical keys could be stuck over the membrane keyboard - and it really was a huge improvement.

'Ram Pack Wobble' was another expansion 'feature' that all ZX81 users will remember.

If you were lucky enough to have the 16KB RAM pack attached, sometimes moving the machine would cause the RAM pack to wobble in it's edge connector and cause the ZX81 to re-set. Now this could really put a crimp on your day.

A bit of blu-tac to secure the RAM-pack in place and you'd be back in business.

The ZX81 really epitomised the days of user tinkering.

Advert for the ZX81

The Classic City Patrol on the ZX81

3D Monster Maze on the ZX81

Krazy Kong On The ZX81

The ZX81 built up a decent software library. Quite a few computer games were available to play, most of which featured very basic monochrome graphics.

There was even a version of chess squeezed into 1KB of RAM!

Even basic 3D games were released, such as the legendary 3D Monster Maze and shoot em up game City Patrol.

If you look carefully at City Patrol you will see very clever use of the machines character set and even rudimentary parallax scrolling.

Look out for another game called Rocket Man. This is a classic ZX81 game in the platform genre that shows just what could be achieved on such a humble machine.

Someone even ported a cut down version of one of the most legendary ZX Spectrum Games Manic Miner to the machine! If you like Manic Miner you will find that the ZX81 version is very, very playable, despite the lack of 'If I was a rich man'....

Developers managed to get a lot out of the ZX81 with clever assembly programming, and versions of arcade classics such as Pacman, Space Invaders and Kong were available for the machine.

Most games required the 16K RAM Pack add-on as squeezing games into only 1KB of RAM was a huge ask.

More games sells more machines, and the ZX81 went on to sell roughly 1.5 million units. Not bad going for a no sound, no colour, 1KB RAM micro.

Manic Miner on the ZX81

Rocket Man on the ZX81

Forty Niner on the ZX81

Back in the early 1980s a company called Software Farm released four 'high-res' games for the ZX81.

These games were blessed with user-defined graphics and sprites that were nicely animated and moved across the screen smoothly.

These games are notable and really pushed the boundaries of the limited hardware at the time.

If you compare them to other games such as 'Mazogs' (which was a good enough maze game)you can see the difference in graphical quality.

If you have a ZX81 or a ZX81 emulator please check out the following games:

This is real hardcore assembly programming at it's finest.

Hi-Res Game Booster on the ZX81

Gamers soon realised that you needed the 16K of RAM to play most of the games available for the machine.

This was fine - the RAM pack simply connected to the edge connector at the back of the unit. But there was a problem:

Even slightly moving the computer, and I mean even brushing against it could cause the RAM pack to wobble which would almost always re-set the unit.

It could be quite simply remedied though: a strip of good old Blu-Tac could hold the RAM pack firmly in place and put an end to the dreaded wobble for good.

So simple, yet so effective.

It should be noted that games are still being developed for the machine today.

For examples of fine 'modern' gaming on the ZX81 (and ZX Spectrum for that matter) check out http://www.bobs-stuff.co.uk/.

This guy is a real talent and creates games that cover a wide range of genres.

A Demo Highlighting The Capabilities Of The ZX81

More Graphical Wizadry On The ZX81