Aeron Chairs Are Good, But Pricey

I used an Aeron chair for many years, but when it finally came time to replace my old chair I simply couldn't afford to purchase another.

After hunting around for budget ergonomic office chair alternatives I came up with a few I really like that are about 25% of the cost of an Aeron Herman Miller chair and give nearly as good of results.

One chair in particular that seems to be a good replacement is the Lorell Executive High back Chair. For a big guy like I am at 6'4" and 250 pounds its hard for me to not only find a chair that fits, but that will also last a long time. This one has been a good alternative to the Aeron chair I previously had.

The Lorell Executive Office Chair is adjustable in just about every way you can imagine and uses a breathable mesh on the back and seat cover. This keeps it cool after extended sittings and looking good after lots of abuse.

The chair adjusts from 17" to 21" from the floor to the seat height. It also has a pneumatic height adjustment, swivels in 360 degrees, has tilt with asynchronous three lever control. In addition, the arms adjust in both height and width.

Overall it's a great buy if you can find it around $150. It won't give you the exact feel of an Aeron chair, but it comes close enough. 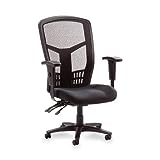 Another chair I like is this Berkshire Executive Chair. The design is actually quite modern, yet very stylish for almost any office. I like the super shiny chrome on the legs of the chair; it gives my office a clean feel. The legs also have casters for easy moving. It swivels in 360 degrees and has a pneumatic gas lift. Adjusting the height of the chair is as simple as pulling the easy to reach lever.

If you don't like the tilt option, you can lock it to keep it upright if needed. I like that this is a high back chair so I can lean back and rest my head on the padded headrest when needed. The back measures 26.5 inches from the seat of the chair. The lumbar support is actually pretty good but it can't be adjusted, and it is quite plush, so I can see people of varying heights not being comfortable with it.

The armrests aren't as padded as I would like but they are comfortable enough; you should also be aware that they can't be adjusted. Assembling this chair was quite simple and took only about 20 minutes.

Overall I still prefer the Lorell chair, but there are some who might prefer this one because of the additional lumbar support.

If you don't need a high back chair you should also consider the LexMod Expedition Office Chair.

At $100 it's a great deal for a well-made adjustable chair with breathable mesh. It features seat tilt with tension control, adjustable seat height and my favorite feature - flip up armrests!

This is so great because I often sit with my children in my lap to watch shows online; with the armrests out of the way, I can comfortably sit with two little ones. This chair has been fine for me in regards to height but I have noticed that it doesn't go up as high as others. Most chairs go up to 22-24 inches but this one only goes up to 19 inches. The plastic parts are heavy duty and the whole chair seems very sturdy. It features recline tension as well so you can get just the amount of tilt that you need.

Putting together the chair was pretty straightforward but some of the factory holes that were drilled in my chair didn't match up well to the other pieces and this was a bit cumbersome. The overall size of the chair seems smaller than others, so larger people might want to find a chair with a bigger footprint. 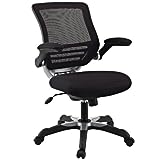 This Super Mesh Office Chair is a great option for tall people, or those that like adjustable headrests. The mesh on the back has to be great for keeping the air flowing and the padded seat is quite nice actually. I did think that the mesh on the chair was a bit firm, but I have always preferred mesh with more give. The back of the chair has some silver accents that keep the look modern.

As mentioned, the high back is quite nice for taller people. I like that it comes with height and tension adjustable lumbar support since some of us in my home need more from time to time than others. The chair seat didn't feel as deep as some of the others I've used from back of buttocks to the knees, but it was pretty comfortable nonetheless.

The fabric on the seat is a bit coarse however, so if you sit in it with shorts, you might want to lay a towel down. The height and width of the armrests are fully adjustable, as is the headrest; it moves up, down and angled to fit the back of your head naturally. The chair is quite sturdy and heavy as well; make sure you have help when moving it if you need it. 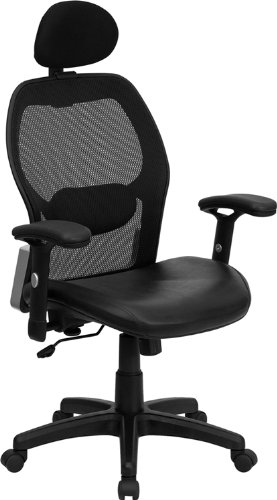 A Solid Mesh Mid-Back Office Chair for the Money

For an even affordable option, you can check out this Mid-Back Office Chair. I love that it comes in so many colors; green, blue, red, yellow and more. This mesh covered chair is ergonomically designed for a natural fit. It has open mesh on the back to keep your back cool with a padded seat. The padding on the seat actually seemed a bit too thin for my liking, but for a basic office chair, this works very well.

The lumbar support is adequate and it features a chrome finished base. The tilt lock mechanism was a bit stiff at first, but has loosed up quite well with use. Assembly took longer with this chair since the instructions were a bit muddled, but it wasn't much harder than many of the others. The armrests are very comfortable even though they can't be adjusted. For the price of this chair, you get pretty sturdy support on a budget. 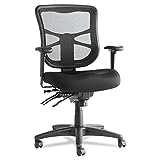 The next chair we are discussing is the Basyx Mid Back Chair. This chair gives you a contemporary design for a very classic look in your office. I like that it features two layers of padding on the seat for even more comfort; it feels so good even after sitting in it for hours! The mesh works very well at keeping my back cool. I like the height adjustable arms that make it convenient for many different users. It also makes things more comfortable when I have to type for long periods of time.

The castors on the chair are heavy duty and are not good for all kinds of flooring. You will want to make sure that the floor you are using it on can handle the casters. Otherwise, just buy a roll mat to protect your floors. You can actually request alternative castors from the manufacturer if it really is a problem. People over 6' tall might find that the back of the chair puts pressure on shoulder blades, but for average folks, the positioning is just right.

This chair is also more comfortable for smaller statured people; if you are very overweight, this chair will not be comfortable for you. This chair doesn't adjust as much as some others on the market, but it seems to do the job quite well otherwise. It does not roll well on carpet however. Assembly was pretty simple as well and overall, we are pretty happy with this chair.

The last chair we are taking a look at is a bit more high end that the others, but it is still a very affordable option to the pricey Aeron chairs. This Office Star Space Professional Deluxe Chair has an almost futuristic feel with the matrix mesh on the back and the fabric on the seat. The seat is the most comfortable of them all with contours in all the right places and super padding; you will not be stiff or sore after hours spent in this chair!

I love that it comes with a height and depth adjustable headrest, adjustable lumbar support, and height adjustable arms that are comfortably padded. It also features pneumatic seat height adjustment with locking 2 to 1 synchro knee tilt to give you movement or stability as you need it throughout the day. It comes with dual wheel carpet casters for more movement on different kinds of carpet. This chair weighs about 61 pounds, so you can tell is is made to be sturdy and long lasting.

Which Alternative Office Chair Do You Have?

Which Alternative Office Chair Do You Have?