There are two types of gaming fans that go in search for a great gaming HDTV. Those who are looking for an HDTV that they'll use for casual gaming and watching TV and hardcore FPS gamers who want a dedicated HDTV with low input lag.

To satisfy the demands of both this post will be split up into two parts and include a learning section for those of you wanting to know more about what you should look for when choosing a gaming TV.

Input Lag and Responsiveness of Your Gaming TV

Input lag, not to be confused with response time, is the difference in the time from when the signal to your device is sent to the TV from when it's actually displayed. Low input lag is most important for FPS-type games where a fraction of a second could mean the difference between life and death. That being said even RPG and strategy gamers are affected by some HDTVs whose input lag can reach well in excess of 100ms!

Some HDTVs come with a game or PC mode that does reduce their overall input lag by reducing the number of filters that the picture goes through. This trade-off usually comes by sacrificing picture quality but can be well worth it for serious gamers.

While covering this topic goes beyond the scope of this article I do recommend four sites for learning about input lag and gaming on your TV:

1.) AVS Forums - AVS Forums is one of the most respected audio, video, technology forums on the internet. See the input wars entitled thread where participants give you over 100 pages of information on input lag for today's newest televisions as well as how you can run these tests yourself.

3.) TFT Central - TFT central is adament about reviewing HDTVs and including input lag numbers. It's worth a look if you're looking for a new TV.

4.) HDTV Test - A relatively new site which like TFT Central includes input lag as a standard test in their reviews.

Taking the forums into account and my own research and testing I've come up with 5 modern TVs that are good options for PC gaming as well as console gaming on the PS4 and Xbox One. For these options I made input lag a priority considering anything under 20ms extremely good while avoiding anything above 34ms or 2 frames of lag.

Keep in mind that we're making input lag a priority. While most of these models would be rated fairly well by the average consumer gamers, with input lag in mind, make a bit of a tradeoff between having a top rated model and one that's well rated and has extremely low display lag.

Sony KDL-47W802A. Released in 2013 the KDL-47W802A is fairly new and as such has all the modern features you're looking for like NFC screen mirroring for your smart phone, built-in wi-fi and applications, and a modern engine. In addition, the sound on it is great even without external speakers.

That being said it's greatest feature is its low input lag. Sporting an incredible 17ms of input lag it rivals and beats many good gaming monitors on the market. This means you get the big screen HDTV feel and picture without the lag that plagues most of these televisions.

Purchasing a new one can be a bit difficult as the newer 2014 models have been released; however, if you can find one, then it will be well worth it.

If you're looking for something a bit larger and more readily available, then I'd recommend the Sony KDL55W950B. It's a 55 Inch 1080p 3D smart LED TV with tons of functionality and more importantly an input lag of just 17ms. While I'm not sure on the lag of the 65" version of this TV if it follows the pattern of other models and sizes across its series for 2014, then more than likely it's under 20ms as well.

In addition to its great specs the KDL55W950B also comes with features like Playstation Now which allows you to easily stream games.

Overall you pay a bit of a premium for the features that this TV gives you. That being said I've never thought twice about spending a little bit extra for quality. If possible, find it in the $1700 to $1800 price range.

While Sony has most of the lower input lag options on the TV market Toshiba has one very good model I thought I'd mention. The Toshiba 47L6200U, released in 2012, has an impressive 18ms of input lag.

Overall, this is a good TV if you can find it at a discount. While it's not readily available everywhere you can generally find it for around $1200 to $1400 new.

If you can get one of these models for cheap, then do it. That being said it's not always easy because people like me try to snipe them from E-bay all the time.

Did you know that a lot of games and most satellite and cable programming can't even be viewed in 1080p? For this reason a 720p is a cheap alternative to some of the pricier 1080p models.

One of the best 720p gaming HDTVs is the Panasonic TC-32LX85 which has performed admirably in input lag tests and is a great all around TV.

With 3 HDMI, 2 Composite video, 1 S-Video, 2 Audio inputs, 1 Component, and an SD Memory card slot Panasonic has made it easy for you to connect to any number of devices which you may have.

The contrast ratio for this model is 10000:1 Contrast Ratio which is a decent number, but beyond the number the blacks just look deeper than other models I've compared it with.

This model is not widely available on many sites but if you can find one at a decent price, then I highly recommend it. You should also take a look at its more recent replacement the Panasonic VIERA TC-L32X30 which has an IPS LCD panel. 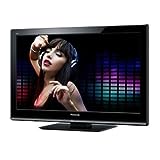 Here's another video I found extremely interesting comparing the input lag between an Xbox 360 and the PS3. I'd be interested in hearing your thoughts about how the author claims that his Playstation 3 has considerably more input lag. If you've tested this for yourself, then please leave a comment in the section at the bottom of this page.

I'd love to hear what TV you're using as well as any results you may have from your input lag tests. Constructive feedback including recommendations for additional models which I should feature is also appreciated.