Part of gaming, for me at least, has always been to see how far I could stretch my rig. With the new enthusiast series X79 chipset and socket 2011 CPU from Intel, benchmarks for overall performance have seen great improvements.

In this post I'll review the best new X79 chipset motherboards and include a learning section where you can find out the basic differences between this chipset and others.

According to CPUBenchmark.net using a new Sandy Bridge-E type CPU can improve your CPU performance by over 30%. The new Sandy Bridge-E CPU also have 4 memory channels of DDR3-1600 which gives you up to 100% increased memory bandwidth when compared to triple memory channels, as well as 40 PCIe 2.0 or 3.0 lanes. Finally, there's a reason to look at performance series products again!

What about the differences in the motherboard design that's been fitted for use with socket 2011 CPU?

PCIE 3.0 Doubles the bandwidth from 8GB/s with PCIe 2.1 to 16GB/s with PCIe 3.0. This should improve the overall speed and functionality of your PC. Will it improve your performance while gaming? Probably not, but it is useful in GPU compute applications. In addition the Intel X79 can support up to 40 lanes of PCI express 2.0 while the Z68 only supports 16. So basically the new chipset will support up to five graphics cards in 1x16, 2x8, and 2x4 configuration.

LGA 2011 motherboards can 4 or 8 DIMM slots with up to 128 GB of ram compatibility. No, that's not a typo - 128 GB of ram capacity. Of course, you might have to look a little bit or pay more than a little bit to come up with 8 of those and you'll have to find the right X79 motherboard that supports it. MSI's GD65-X79A is one such capable motherboard.

My favorite X79 motherboard so far is the all new Rampage IV Extreme from Asus. Although it's somewhat expensive, for me as an overclocker, I prefer Asus or Gigabyte boards and have had a lot of success easily overclocking with Rampage series motherboards in the past and this particular one is already an OC3D award winner.

The complete digital VRM design allows you to achieve incredible performance with adjustable CPU and power management frequencies and it supports up to 4-way SLI/CrossFireX. The board even includes its own overclocking zone which makes it super convenient and easy and I now that I've experienced it I'm not sure I could go away from the OC key.

DIGI+ Power Control - Flexible precise adjustments for System Stability, High Power Efficiency and Improved Performance Scaling on both CPU & RAM. ASUS SSD Caching - One click away from experiencing the benefits of both SSD and HDD without any capacity limitation. 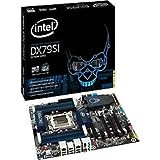