Experts agree that the video quality on the Logitech Circle 2 is excellent. It records in full HD (1080p), out details such as faces, while good colour accuracy helps to capture skin tones, example.

The camera has an exceptionally wide 180 degree field of view, which helps to capture more of the room. It can however be toggled to two narrower settings - 'wide' (130 degrees) and 'ultra wide'.

Most reviews agreed that night vision is also good, allowing you to make out peoples' faces and movements just as well in the daytime. Some experts felt that quality of night vision recordings wer lacking, especially in the periphery (away from the centre of the image).

Typically full HD cameras recording at 1080p use a maximum of 1.2Mbps bandwidth from your internet connection, which is the highest video quality. Note that this is per cam, so if you have more than one, it will require greater bandwidth.

Remember that this is upload speed, which will typically be slower than the download speeds advertised on your broadband contract.

Some users report that the Logitech Circle 2 uses a high amount of bandwidth to record at this quality - up to 20GB/day. This might be due to it picking up lots of movement. However, you might want to be aware if you are on a capped internet plan, or one which trottles your connection if you use too much.

There's also a lower quality mode, 360p, which would suit slower internet connections, but video quality is likely to suffer.

Logitech offers 24/7 live viewing of video for free. Some reviews noted a slight lag when viewing live video. While viewing, you can use two way audio to talk via the camera. This can be used to talk to pets and family, or to alert an intruder that you're aware of them.

Being able to watch live means that the camera could be used as a baby monitor. Although, unlike traditional baby monitors you'll need an internet connection to use it as you can't connect directly to the camera from your phone or tablet.

It records continuously too - footage is held in the cloud, but the length of recordings which are retained depends your level of subscription to Logitech Circle Safe: the free plan allows you to retrieve 24 hours of recorded video. Paid subscriptions allow you to extend this to up to 31 days, as well as unlocking certain features, as we'll cover later.

Clips where motion detected are listed by time in the app, and can be easily saved to your phone or computer. There's also a daily brief option to view a summay of events over a particular period.

The Logitech Circle 2 lets you choose to receive alerts if it detects motion. These come in the form of push notifications for the mobile app.

As is standard across these products, with a Premium subscription, alerts become even better - using cloud processing to provide smarter motion detection and alerts:

A scheduling option (when to turn the camera on for recording) is not available. This is mitigated by support for geofencing, which uses your phone's location to decide if you are home or away and set the camera accordingly.

Reviewers were positive about the promt alerts, person detection and filtering. However note that some of those features require a Premium subscription.

Circle Safe is the name of Logitech's cloud subscription service, which provides additional storage and features, for a price.

A Circle Safe subcription is necessary to access recordings older than 24 hours. The Basic plan provides 14 days recording history. Howevr, a Premium subscription is required to use many of the Circle 2's features. This includes:

However, this subscription is an additional cost, as shown in the table below, and the subscription charges will eventually exceed the initial cost of the camera.

The premium plan is slightly cheaper is paid for annually (£80/year).

Bear in mind too these are charges per camera, rather than a single subscription covering all your devices. That is available (for up to five cameras) at £6/month for Basic, or £16/month for premium. Again, paying annually is slightly cheaper.

Installation is easy and takes about 5 minutes - download and install the app, create an account then pair to the camera using Bluetooth (one review noted that the Wireless model needs to be connected to mains and have full charge in order to pair).

The camera can be positioned indoors or outdoors, however:

On that note, there are optional accessories for mounting, such as a plug socket mount or window mount. The window mount enables Window mode which improves recording of the outside through the window by reducing glare.

Once positioned, the camera can be adjusted by its swivel hinge. The 180 degree field of view helps with positioning by capturing a large area with little distortion around edges. This can help to reduce blindspots.

On the Wireless model, The ring of LED status lights around the camera shows the battery status:

The Logitech Circle 2 integrates with both Amazon Alexa and Google Assistant. In addition, the Wired model supports Apple HomeKit (but not the Wireless one).

With Amazon Alexa, tou can:

While HomeKit lets you set-up actions such as turning on a light when motion is detected, streaming to phone/watch, and push notifications to your Apple device.

IFTTT (If This Then That) is not supported by this camera.

Some users have reported issues with the connection dropping when further from the router.

On the Wireless model, some users didn't achieve the claimed 3 month battery life.

Use as Baby Monitor

The Circle 2 can be used as a baby monitor - facilitated by live view and night vision. Unlike more traditional baby monitors, it requires an internet conmection to use. However, you can put this camera to other uses after you're done with it as baby monitor.

If you designate an iPad to use with it, you'll need to disable auto screen-lock on your iPad, plug it in (e.g. overnight) and then launching the app.

Also note that you can't view multiple cameras simultaneously and have to switch between them.

The Logitech Circle 2 is an excellent camera in terms of ease of use and video quality. It in both Wired and Wireless versions. It's positioned as a premium product and its price definitely reflects that however. The Circle Safe subscription service allows you to access recordings more than 24 hours old and the Premium tier unlocks some of its more advanced features. Just remember to factor in this monthly cost if you are thinking of buying.

Buy It On Amazon 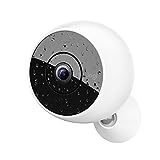