Is the "Logitech Anywhere Mx" Worth the Price Difference?

The Logitech M510 Wireless Mouse and Logitech Wireless Anywhere Mouse Mx are both great mouse devices from Logitech, but which one should you go for? The M510 is cheaper, so is the Anywhere Mx better? If yes, what is it that makes it a better mouse? Is it worth the price difference?

This article is here to clarify these points and help you make the right decision.

Before I start with the comparison, I would like to precise that both these mouse devices are cordless, they are both easy to use (you simply have to plug the USB dongle: see picture), they both look quite similar (black, quite elegant) and they both have a scroller in the middle.

About the USB dongle, it works fine even if you plug it on a USB port on the other side of the computer (for example dongle on the left and mouse on the right of the computer). This is true for both mouses.

Looking on the internet I found the following:

But actually, I did not know about it when I bought them.

So, the bigger the better? Well, I would have imagined so but I do like the size of the Anywhere Mx. It seems to fit better in my hand and unless you have big hands I would recommend the smaller size mouses.

Again a surprise for me. I would have said that the lighter was the better but I was wrong. The Anywhere Mx is heavier than the M510 but it does feel better. You have a better control when moving the mouse. If you are a chess player, this may remind you of the difference between weighted chess pieces and cheap plastic ones. I am not implying that the M510 is a cheap mouse. I like it and use it every day but the extra weight on the Mx mouse does make it feel better. 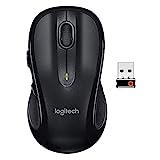 For this part, I have to admit I am quite lucky because I do have a glass table so I could easily test this "Darkfield Laser Tracking" technology that makes the mouse work on glass. And I can confirm. The standard optical mouses (both the M510 and another HP optical mouse I tested) are completely useless on glass, while the Anywhere Mx does not have any issues. If you plan to use your mouse on a glass table or may have to use on glass, get the Anywhere Mx.

Both mouses have buttons on the side (for the thumb) but I did not test them.

Both also have a on/off switch on the back of the mouse to save some battery life when you put them in your bag (clever).

The Anywhere Mx has an extra button on the top but I am not using it (you can see it on the picture, just next to the scroller).

All in all, the Logitech Wireless M510 is a good overall mouse and should be good enough if you are a on budget but I have to admit that the Logitech Wireless Anywhere Mx is a better mouse and I believe it is worth the price difference, especially if you are using your mouse a lot and especially if you keep in mind that this will be a one-time cost difference (you are not going to buy a mouse every month).

Update 14 June 2013: I am still using both mouse devices! It has now been several months and I haven't had problems with them (except having to change the battery on one of them).

If you have any questions or comments, feel free to use this section. - Leave a comment