You would think that this simple act of vanity is a result of technological advancements, new cameras, phones and apps of the 21st century . But in fact, selfies aren't new. They aren't just hundred years old too. In fact, they are almost 200 years old.

How many selfies do you take per day?

1. The first ever selfie dates back to 1839 when a photography enthusiast named Robert Cornelius tried to take a photograph. Another fascinating fact about this selfie is that he had to stand still for at least 3 minutes before the picture would turn out. Thank the gods, the exposure time needed for our iPhones is slightly lower!

2. In 2013, Oxford Dictionary not only added the word "Selfie" on its database, but also announced it as the word of the year. And if you don't already know, Oxford Dictionary does not call the picture a selfie unless you share it on social media. So go ahead and "Instagram" it!

3. Even animals are crazy for their looks. In 2011, a photographer David Slater left his camera for a macaque monkey to play around with. Turns out, the monkey is quite cheeky and photogenic. The monkey's self-taken selfie became more popular than Kim Kardashian's selfie at that time.

Unfortunately, David couldn't hold the ownership of that selfie and had to give up the copyright because the law only applies to humans. Whoever shoots a picture, gains its copyrights.

4. Ellen Degeneres' Selfie in the Oscars 2014 became the most retweeted picture ever, superseding President Obama's selfie. It actually broke the internet with 3.4 million retweets and over 2 million favorites. But did you know that it is actually Bradley Cooper who holds the official rights to the selfie? Fascinating, right?

Watch: Ellen DeGeneres takes a selfie at the Oscars

With the rise of selfie culture, demand for selfie stick also surged. If you believe Google, people searched for the term for 19 more times in 2014 than they did in 2013 - with "iPhone selfie stick" being the hottest in demand. 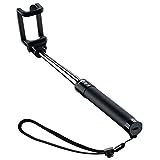 6. There are far more people than you would imagine who don't know what a selfie is. In 2014 only, the Google search for the term tripled. And far as the people who know what a selfie is is concerned, they are trying to take better and beautiful selfies. According to Google, their number of searches for "how to take a selfie" has increased by 6 folds in 2014.

7. Girls may be pros in taking gorgeous selfies, but guys are catching up too! People searched the internet more for "men's selfie tips" but almost never for "girls selfie tips".

8. Out of all the social media websites, Facebook holds the highest share of uploaded selfies at 48%. A city called Makati in Philippines has the highest number of uploaded selfies with New York as the second. Similarly, selfies are the most popular in Australia, with a study confirming that over two-thirds take selfies. This phenomenon is said to have been influenced by Kevin Rudd in 2013, who frequently posts his selfies on Twitter. Hmmm..

9. Kylie Jenner of the Keeping Up With The Kardashians fame has the most number of celebrity selfies (#451 as of 2014 end).

In July 2015, she revealed to the Hollywood Life that she takes 500 selfies to get the perfect one to post on Instagram.

Q: Why do people take selfies?

A: Starting from 2013, people have taken selfies for a number of reasons like:

While most people agree that they take a selfie just to capture the time with their loved ones, as it turns out, there can be a lot of things involved. Primarily, taking a self-portrait and/or selfie is like promoting yourself. Dr Terri Apter of Cambridge University tells that people as social beings like the idea of being noticed and getting attention, being endorsed, being in part of the culture.

Q: How many selfies are taken in a day?

According to a survey conducted in 2015 by Luster Premium White, about 1 million selfies are taken per day.

Q: How much time do people spend every day on selfies?

Q: How many selfies do people take in their lifetime?

A: Extrapolating the number of selifes taken per day and taking into account an average life expectancy, millenials and young adults will take more than 25,000 selfies.

Q: Is taking a selfie while driving dangerous?

A: Yes, it is extremely dangerous. Distracted Driving Report published by US Department of Transportation reported 33,000 people were injured while taking selfies while driving in 2014.

Casualties Attributed to Selfies: In 2015 alone, more people died taking "extreme" selfies than by shark attacks. 12 deaths were confirmed to selfies while there were only 8 shark attack casualties. During 2013 - 2015, 67 selfie deaths were confirmed. PetaPixel reveals that 1 in 3 selfie deaths are from falling from heights, with India being the number 1 fatality among all deaths caused by selfies.

Interesting: Manny The Cat Takes Better Selfies Than Most People

Manny, a cat takes extraordinary selfies with a GoPro. His selfies can be viewed in the Instagram handle @Yoremahm.

And Manny has more than 162,000 followers and his selfies get almost 20k likes.