The author is postgraduate in Botany and experienced in IPR handling as well as agribusiness management with an MBA, lives in a farmhouse.

It is a pure form of semiconductor with the equal number of electrons and holes. The Fermi level in an intrinsic semiconductor lies between conduction and valence bands.

They are made by adding trivalent or pentavalent impurities.

Charge carrier is a hole. Fermi lie near valence band.

The transistor is a semiconductor device which can switch or amplify electronic signals. It has at least three terminals for external connection.

MOSFET or metal oxide semiconductor field-effect transistor, is the most commonly used semiconductor transistor device, which is used to amplify signals in electric devices. Mosfet is also known as the backbone of modern electronics. It is widely used transistor both in analogue and digital circuits.
It has four terminals namely gate, source, drain, and body. Nowadays, due to the advancement in technology, it can be fabricated and designed in a single chip of very small size. This is different from other transistors, as it can be used both in digital and analogue circuits.

They are further classified into N-MOS and P-MOS
N-MOS or N-type MOSFET have electrons as majority charge carriers. Electrons have higher mobility than holes.
P-MOS or P-type MOSFET have holes as majority charge carriers. Holes have lower mobility compared to electrons.
N-type and P-type MOSFETs can be clubbed to make CMOS or complementary metal-oxide-semiconductor. It was first developed by Chih - Tang Sah and Frank Wanlass. This type of transistor reduces power consumption and due to this, the excess heating in integrated circuits (ICs) can be reduced.

MOS capacitors: It is a part of MOSFET where the mos capacitor is in between the p-n junction. This capacitor is used as a storage capacitor in the memory chips. They are building blocks in CCDs or charge-coupled device.
It is also used in dynamic random access memory (DRAM).

It was invented by Mr Paul K. Weimer in the year 1962 at RCA.
They are used in liquid crystal displays.

It has a vertical structure not a planar structure like other transistor devices. Since it is vertical in structure it can block both high blocking voltage as well as high current. This device is used in power electronics. It has advanced paralleling capabilities. Its switching speed is very fast. It also has a low gate drive power.
Double diffused metal oxide semiconductor or DDMOS comes under this power MOSFET and it is of two types.
VDMOS or Vertical DMOS is a special form of DMOS Transistor where we use two dopants in the drain region. These are mostly used in automotive electronics.
LDMOS or lateral DMOS is a double diffused MOSFET. It is used in the microwave, audio powered amplifiers etc. 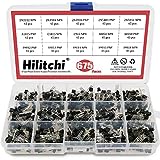 Revolutionary progress is happening in the designing and inclusive product development fields in the electronic industry. Nanotechnology has made it possible to have the highest degree of integration and precision in the performance of power supply devices.

Do you agree that MOSFET control is the revolutionary landmark in electronics?