Katana: the Sharpest Weapon Ever

What is a Katana?

Katana is a type of traditional single-edged Japanese sword, around 70-90 cm long and with a slightly curved blade. These weapons were very popular in Japan during the so-called Age of the Samurai (from 12th to 19th century), although they weren't used as much in open warfare as they were in duels, demonstrations and other civilian purposes. They were often carried in pair with a smaller sword called wakizashi.

Multiple kinds of steel are used in different parts of the katana blade. The traditional forging methods (repeated heating, folding and hammering) and the high quality Japanese steel with a lot of carbon content are the reason why katanas are one of the sharpest, strongest and most flexible edged weapons in the world. There are many myths and legends related to these swords, and they are a part of the modern pop culture as well.

Real katanas are still made in Japan by using traditional techniques and materials. They can be very expensive and even difficult to buy. There are lots of low quality reproductions available as well, but these are machine-made and only good for show. A low quality reproduction can cost anywhere from $20 to $200. A high quality reproduction which is heat-treated and can actually be used to cut something may cost up to $1,000 or even more. An actual samurai sword can easily cost $5,000 and upwards.

Japanese Katana vs a 0.50 Machinegun

Sword vs bullet - proof that katana is the sharpest weapon ever!

A Japanese katana takes seven shots from a 0.50 caliber machine gun before breaking in half completely. The muzzle velocity is 930 m/s (!) and the bullets are sliced in half by the sword; however, the katana is dented visibly right after the first one.

While good katanas can cut 9 mm bullets fired from a pistol with barely any visible damage (see the other video below), they are no match for this military M2 heavy machine gun.

9 mm Handgun vs a Katana

Watch a Japanese katana cut 9 mm bullets in half with barely any damage to the blade. I guess those anime shows where a swordsman slices a bullet in half aren't completely unrealistic...

How a Katana is Made

The process of making a traditional Japanese samurai sword

Nowadays only a few Japanese smiths who have a special license can make the real katanas which they call "shinsakuto". The forging of a Japanese blade using time-honored techniques typically takes not just days, but months to complete, and that's while involving several people in the process. The steel is repeatedly folded, heated and hammered which eliminates the bubbles in the metal and spreads the elements evenly throughout all of the blade, thus increasing it's strength.

A typical Japanese katana has only one edge, which allows them to use the rear of the sword to reinforce the blade. A katana is usually made from several layers of metal which are forge-welded together. The traditional "makuri-gitae" design, for example, has a softer inner core, and hardened metal on the edges.

After the blade is created, it is given to a polisher who uses up to seven different stones to give it a perfect look. The polishing often takes longer than the actual forging, and greatly improves the beauty of the blade.

From there, the blade is then given to a hilt-maker, who creates the grip, the hand guard, and other elements. The sheaths and the hilts are often ornately decorated. 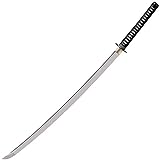 Cold Steel Warrior Series Katana Samurai Sword with Ray Skin Handle, Black Lacquered Wood Scabbard, Black Braid Cord and Brass Menuki, O Katana
This katana you can order online is still only a reproduction, but a high quality one. Cold Steel use only traditional materials in making their katanas. A handsome black lacquered wood scabbard is included. Great deal if you're looking for a high quality reproduction.
Buy Now

A Beautiful Japanese Katana Drawn from Its Sheath 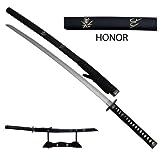