In 2017 all monitors are Mac compatible as long as they can be plugged in to the back of your Macbook Pro or Mini. That being said not all of them make a lot of sense for you to use. Understanding the difference between technical details and words like Thunderbolt, DisplayPort, HDMI, LCD, LED, TN, and IPS will help you make a good buying decision.

In this post, I'll give you a guide for what to look for in a monitor for your Mac as well as my picks for the best monitors for both the MacBook Pro and Mini.

First, let's go over the standard ports that each of these devices use so we can get a better understanding of what is easiest to use.

As you can see in the picture above a standard Mac Mini comes with a Thunderbolt Port and an HDMI port.

Is the Mini DisplayPort compatible or does it work in the Thunderbolt Display Port?

Yes, the Mini DisplayPort uses the same geometry as the Thunderbolt port.

Can I use a monitor which has a DVI or VGA Port?

Dell UltraSharp U3011 30" Monitor
Looking for something with a wide Color Gamut, DisplayPort, and Large screen? The U3011 has it all with support for 1.07 billion colors (30 bit).
Buy Now

Choosing a Monitor for your Mac

While Apple's Thunderbolt Display is certainly a great option for any Mac-user, it's pricey. There are many other affordable alternatives to consider for every day use. Here's a few things you should consider before deciding upon a mointor:

Most current monitors are TN or twisted nematic panel monitors. These monitors are known for their quick response times, good pictures, and low price. While a TN panel monitor is ideal for someone doing daily work it's not quite as accurate as an IPS panel monitor.

IPS or in-plane-switching monitors are ideal for photo editing, graphic design, or anything else where color accuracy is important. These monitors are more accurate because they use 24, 30, 36, or even 48 bits compared to the 18-bits that a TN panel monitor can reproduce. Response times are generally slower with IPS monitors than TN panel monitors often producing some additional blur when watching video.

LED monitors are in fact liquid crystal displays. What sets them apart is the way they are backlit. LED monitors tend to be thinner, can produce deeper blacks, and don't produce environmentally harmful mercury like you find on older flourescent lamp backlit LCDs.

1920 x 1080p is considered full high definition. This means that there are 1920 pixels horizontally on the screen by 1080 pixels vertically.Those use a Mac Mini or other Mac device for daily use will find that this resolution is crystal clear and more than good enough for their daily tasks.

Graphic designers and photo editors sometimes find that this simply isn't enough for what they're working with. While a monitor like the Apple Thunderbolt Display offers 2560 x 1440 Resolution for this very reason, it may not be the ideal solution for someone who needs a perfectly callibrated monitor with a perfect level of accuracy.

A Good and Cheap IPS Monitor Under $300 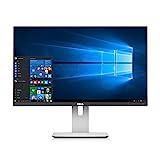 If you're looking for a monitor that will be save you money and be equal to the resolution and feel of the Apple Cinema Display, then this is probably your best bet. With a WQHD resolution of 2560 X 1440 and nearly perfect color accuracy out of the box it's a really good deal. While it's still a bit pricey it's still a good deal compared to other similar high resolution IPS monitors on the market.

Released in late 2012, the Dell S2340M has become one of the most popular monitors on the market because of its low price and reproduction of 82% of the color gamut. It has a 1920 x 1080 resolution and comes with VGA & DVI connectors. While this is a great budget monitor it certainly won't win any awards for versatility. If you need flexability, then consider spending a bit more and getting the Dell UltraSharp U2312HM which has a DisplayPort as well as VGA and DVI connectors.

If you want the benefits of having an IPS display without paying the IPS cost, then consider one of the budget IPS displays from Dell which I've listed above or the 4 I've listed below from Asus and Viewsonic. While there are certainly other good options on the market, these particular ones are well-rated and don't have as many problems as others I've seen.

This affordable monitor from Asus includes HDMI, D-Sub (VGA), and DVI-D inputs. With a 5ms response time it's still good for watching movies or playing games and it has a full high definition 1920 x 1080 resolution.

Want something Bigger? The U3014 is the most recent version of this monitor; however I still like this previous generation model which gives you a similar resolution and size for $300 - $500 cheaper. Both are advertised as supporting 1.07 billion colors which means that they are both 30 bit as well. The U3011 comes with DVI, HDMI, USB, DisplayPort, and a USB port.

In this post on the best Mac alternative monitors I reviewed my favorite Mac compatible monitors of 2013 thus far. Photo editors or graphic designers should spend a little bit more and go with an IPS panel monitor with a reasonable high color gamut. Those who don't need color accuracy may find that saving money and going with a TN panel LED monitor or a budget IPS monitor is their best bet.

If you enjoyed this post, then please participate in the manufacturer poll below and leave me a comment with any feedback you have. 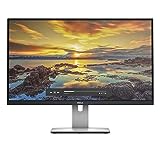 Which Brand or Manufacturer Makes the Best Alternative to the Mac LED Cinema Display?

Vote and leave a comment in the guestbook section below!