A list of 10 Showers That We Know You Want

Here you will find nothing but the most advanced shower systems available... and bath fitter as well. You will find photos and videos of some of the most amazing showers and steam showers on the market. 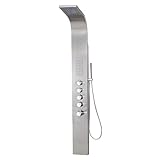 The OS-972F8 Steam shower by oasis is perfect for replacing an existing bathtub. This specialized modular steam shower give the appearance of being a custom built in steam shower. It features 2 overhead shower heads, a 6kw steam generator, teak accents and much more. This unit typically takes about 2 hours for a full installation and has a specialized drywall flange to give it that custom look. Made entirely of tempered glass this unit is extremely durrable and easy to clean.

The Ariel Platinum DZ959 shower is the deal of the century. For just around $3,000 you can own this jewel of a shower enclosure. It has a computer control panel that allows you to control the internal temperature of the steam room, the radio and entertainment system and chromo therapy lighting to name a few.

The Ariel Platinum DZ959F8 is now available in white or black glass. Giving two completely different styles the new glass color has a more modern sterile look to out. Check out the Amazon link below for more information 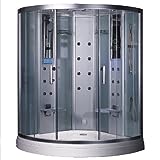 The Rainshowers from Joeger is an incredibly large overhead rainfall shower head. Built in LED lighting gives this shower a unique ambience.

The Ameristeam P-219 is perfect of home renovations or new construction. It meets all CSA certifications and has a wide variety of features. Its most impressive aspect is the two person bench seat, unseen in modular steam showers.

The Royal SSWW B-602 Steam Shower is one of Americas best selling showers. With its innovative design and overall modern appearance, the Royal 602 steam shower has quickly become one of North Americas hottest sellers. Its unique blue tinted mirrored walls, high performance jets and plethora of features make the 602 shower stall appeal to a wide demographic of consumers.

Here you can see the B-602 Steam shower in action. No wonder its so popular.

The Ariel Platinum DS202 offers the owner the best of both worlds with a steam shower and a built in sauna. The sauna is available in both a finnish style and an infrared style sauna. This has become a very popular unit in the last few months.

80 Gallons a minute sounds about right

The kohler Body Spa has a built in pump that recirculates water at a rate of 80 gallons a minute. This unit is not recommended for small children due to risk of drowning

The Aquapuetic Steam Shower features a 4.5kw steam generator capable of producing steam in about two minutes. This steam generator gives the owner the ability to enjoy all the health benefits associated with steam therapy.

Why Buy a New Shower When You Can Cover Your Old One in Crappy Plastic?

They say it will be done in a day or two ...or three but theres nothing better than a nice plastic shower! Unfortunately this will probably cost you around $6-$7k but hey its worth it for at least a month. Im bet your glad you called.